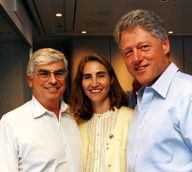 
It's all in the family! Senator Chris Dodd writes a financial reform bill but forgets to regulate derivatives, "financial weapons of mass destruction." Then we find out that his wife works for the owners of two exchanges that will very likely benefit from Dodd's "reform" legislation.

They make the rules. They take the money, all of it, and leave us with debt. And they tell us it's all legal.

In the middle of a blog item about credit default swaps, Felix Salmon of Reuters drops the following nugget about Sen. Chris Dodd and the CME Group, which owns the Chicago Mercantile Exchange and the New York Mercantile Exchange.

"Dodd's wife, Jackie Clegg, is a director of the CME, which paid her $153,219 in 2009; she also owns shares in the company worth about $235,000. (The CME makes no mention of her husband on its website or in its SEC filings, despite the fact that he's surely a big part of the reason why she has the position.)"

Why is this notable? (Full story)

Why? Because the Senator, who is supposed to represent the people, left out a big piece of necessary financial reform. He forgot the tight regulation or out right banning of derivatives - a form of gambling illegal in the stock market for nearly 100 years before Congress brought it back to life.

Look what Warren Buffet says about derivatives in the press in 2003 and his 2002 annual report.

The rapidly growing trade in derivatives poses a "mega-catastrophic risk" for the economy and most shares are still "too expensive", legendary investor Warren Buffett has warned.

But Mr Buffett argues that such highly complex financial instruments are time bombs and "financial weapons of mass destruction" that could harm not only their buyers and sellers, but the whole economic system.

Buffet goes into a little more detail in his 2002 annual report.

"Unless derivatives contracts are collateralized or guaranteed, their ultimate value also depends on the creditworthiness of the counter-parties to them. But before a contract is settled, the counter-parties record profits and losses often huge in amount in their current earnings statements without so much as a penny changing hands. Reported earnings on derivatives are often wildly overstated. That's because today's earnings are in a significant way based on estimates whose inaccuracy may not be exposed for many years."

The fearless financial blogger who hounds Wall Street firms for their shoddy and illegal practices, Felix Salmon, first broke the story. He explains how Dodd, who is retiring this year, feathers the next for his wife's firm.

Related Topic(s): Derivatives; Dodd-Christopher; Family Values; Financial Regulation; Global Financial Collapse; Trading Insider, Add Tags
Add to My Group(s)
Go To Commenting
The views expressed herein are the sole responsibility of the author and do not necessarily reflect those of this website or its editors.

STAY IN THE KNOW
If you've enjoyed this, sign up for our daily or weekly newsletter to get lots of great progressive content.
Series: "The Money Party"