Why no successful socialist countries exist 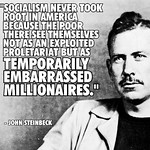 Successful socialist countries do not exist for the simple reason that capitalism has waged war on socialism from day one. Capitalism is an economic system based on alleged competition, yet it will use any measure necessary to destroy a competing economic system such as socialism.

On the home-front, US capitalists have deployed the US Army, National Guard Units, police, and private security such as Pinkerton National Detective Agency against striking workers since the 1870s. A few of the more famous actions in which strikers were killed are the 1892 Homestead Steel Strike, near ; 1894 Pullman Railway Strike; 1903 Colorado Labor War strikes against mines. The International Workers of the World Union (Wobblies) founded in Chicago, 1905, was attacked by the First Red Scare and the Palmer Raids in which leftist, socialist, communist union members were attacked, jailed and deported.

Child labor laws, the 40 hour work week, minimum wage laws, overtime pay, Social Security, Medicare, Medicaid were all opposed by the capitalist class as socialism when proposed. Yet most Americans would agree that now they are all good programs that offer vital protections for all the American people.

"Tonight, we renew our resolve that will never be a socialist country." President Donald Trump", 2019 State of the Union speech was received with a standing ovation, even some progressive Democrats stood and applauded. Heaven forbid that we would be able to participate in a democratic discussion of the pros and cons of socialism and capitalism. If we could just turn the calendar back, we can imagine Trump and the cheering Congress opposing as socialism: child labor laws, 40 hour work week, minimum wage laws, overtime pay, Social Security, Medicare and Medicaid.

The has used military force, military coups, propaganda, repressive economic sanctions and blockades on each and every socialist and socialist leaning country. Beginning in 1918 President Woodrow Wilson sent troops into to undo the Russian people's revolution. They soon found vast, cold and unwelcoming to the snake oil the was selling. After WWII, it was only the threat of Russian nuclear retaliation that kept the West from attacking and allowed the flawed autocratic socialist government to peacefully coexist with the capitalist states during the Cold War.

I'm not here to defend the brutal murderous excesses of Lenin and Stalin. The sought to overthrow the not because it was undemocratic, but because it was socialist. I don't see us railing against 's repressive monarchy because of its dismal record on human rights. No, our Presidents visit, don their dress and dance with their leaders. Our government is now surreptitiously giving them nuclear power technology. Whether or not they are democratic or not is of no concern to US policy makers. The important thing is that is not a socialist country.

When Mikhail Gorbachev attempted to bring the in from the Cold War as a proposed Scandinavian style democracy that guaranteed the people a strong social safety net, he was replaced by Russian President Boris Yeltsin who declared independent of the . Yeltsin was directed by the economic team to privatize all the state's assets (industry, mines, resources, etc.) for pennies on the dollar before any economic assistance would be available. had already achieved a level of democracy, perhaps better than ours: free press, elected Parliament, elected local councils, elected president, vice president and a constitutional court. At the West's urging Yeltsin was given dictatorial powers for one year by Parliament to enact the draconian economic programs demanded by the West that soon made beggars of the Russian people. went from a 1.3% poverty rate (less than $4/day) in 1989 under Gorbachev to a 49% poverty rate in 1996 under Yeltsin and the capitalist financial reforms demanded by the .

Eventually Parliament refused to continue to go along with the capitalist reforms which had their citizens selling their belongings on street corners. Yeltsin surrounded the Parliament building with tanks and a standoff occurred. Clinton was US President and both he and the European Union supported Yeltsin, who on October 4, 1993 shelled the Russian people's parliament building called the White House with the entire Parliament inside and burned it to the ground killing an estimated 500 people and wounding 1,000. So much for Gorbachev and the Russian people's incipient democracy and dream for a semi socialist state. The result of this massacre is the present autocratic capitalist with billionaire oligarchs and a poverty stricken people. (Naomi Klein, The Shock Doctrine)

Currently in our government and media give a constant refrain that we want democracy. Nothing could be further from the truth, the demands capitalism. had to sacrifice their new democracy to make way for capitalism, is no different.

This article is not meant to defend or attack 's Bolivarian Revolution under Hugo Chavez and Nicolas Maduro. That should be up to the Venezuelan people, free of propaganda, blockades, economic sanctions and threats of military attack. The sole purpose of this article is to explain why and all other countries that have searched for socialist answers have failed.

The following governments had achieved a level of democracy. They had democratically elected leaders and were attempting to match democracy with socialism or a semi-socialist safety net. The US CIA conspired to engineer and or support military coups that installed repressive right wing governments that to varying degrees then jailed, tortured and killed socialists and communists:

didn't make the above list because it was not a democratically elected government. Yet under Moammar Gaddafi's 42 years of leadership, it certainly had many socialist benefits that President Obama failed to mention when he declared it was necessary to militarily intervene: free healthcare; free education, including university & graduate school; $50,000 housing grant to all newlywed couples and complete equality for women, unheard of in the Muslim world. Gaddafi built what has been referred to as the 8th Wonder of the World, the Great Manmade River Project the largest system of underground pipes and aqueducts in the world that every day supplied 6.5 million cubic meters of fresh water to the coastal cities of . In addition Gaddafi had proposed to unite the entire African continent under a common currency. Under had gone from being the poorest country on earth to having the highest standard of living on the African continent. Now after the US/NATO war, much of is a failed state largely ruled by roving bands of armed gunmen and no one is safe.

An informed debate needs to be held on whether or not we should have a capitalist, socialist or some sort of hybrid economic system. But please don't bring to the debate the argument that socialism has never been successful. Perhaps, the debate should start with the question, Why are the capitalists afraid of competition from socialism?

Nick Egnatz is a Vietnam veteran. He has been actively protesting our governmentâ€™s crimes of empire in both person and print for some years now and was named â€œCitizen of the Yearâ€ for Northwest Indiana in 2006 for his peace (more...)
Related Topic(s): Capitalism; Capitalism Failures; Capitalism Over Humanity; Capitalism-A Love Story; Coup; Democracy; Democracy; Gorbachev; Medicare; Propaganda; (more...) Socialism; Socialism; Socialism; Socialism For The Rich; Yeltsin, Add Tags  (less...)
Add to My Group(s)
Go To Commenting
The views expressed herein are the sole responsibility of the author and do not necessarily reflect those of this website or its editors.

Mourning 100 Years of Usury under The Fed

Paying for the Green New Deal