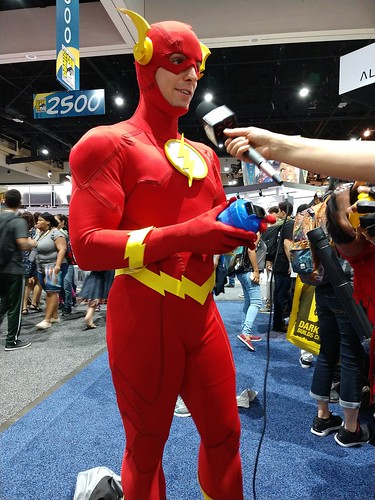 At this time in our country's history we have been reminded of how powerful the First Amendment can be. Headline after headline talk about the Black Lives Matter protests that are occurring nationwide, followed by other headlines of the arrests of police officers, and proposed sweeping changes to the institution of the police itself. But amongst these articles you might have noticed a headline that subtly threatens to cut the power of protest at its knees. The firing of Hartley Sawyer.

Hartley Sawyer was a star on the CW series The Flash. Even if you don't know who Sawyer is, you have heard this story before. Tweets from years ago, before this star was relevant resurface, that are considered inappropriate, ie: racist, sexist, misogynistic. Whether they are the individuals attempt at shocking the world and being noticed, or their actual world views does not matter, nor how long ago the tweets were sent, or people's actual experience with the person.

What matters is the Tweets exist, and the production company must step up and distance themselves from this individual as quickly as possible. All of which is what happened with Sawyer. The tweets were racist and misogynistic: jokes about cutting off breasts, date rape, black prison population. They were sent around 2012-2014, before he was relevant. No one from the cast defended him and stated their personal experience. And he was immediately terminated. Oh and of course the liberal crowd cheered.

Now this is not a piece about how again the social justice crowd can't take a joke, and they are killing comedy. Or how people should not be judged by their past behavior. Nor a defense for Sawyer that these are just jokes, or a movement to get Sawyer his job back. I don't care about Sawyer, The CW, The Flash, their fandom or his co-stars. I don't care about any of this. This piece is a warning liberals need to take seriously and not bury their own graves. When these incidents come up, the people who defend stars like Sawyer, are often met with the rebuttal. "The First Amendment doesn't protect you from being fired." Is this the message liberals really want to promote?

It is true the First Amendment written in the Constitution is in regards to the government not taking criminal action for the speech of an individual. But it also avoids saying anything regarding employment. Does it protect your job or have no affect? Like most points in the Constitution, it is up for debate and interpretation. So why are liberals now so quick to take a position not protecting the author of said speech? Look, after imprisonment, threat of losing one's source of income is probably the next most powerful threat. Its application can render the first amendment impotent. Don't think so? Then think again!

It was recently revealed that a group of fast food chains, and other companies donated to President Trump's re-election campaign. Legally, what is to stop them from sending out a company memo that any person who negatively comments on our sitting president will be terminated immediately: "Well they can't do that. They're using their First Amendment." Yes they are. But you also argued First Amendment does not protect one from being fired. If it does not protect a celebrity or a sports figure, what chance does Lisa the cashier at Wendy's have?

"But they will have to explain themselves", you say. Okay, well they already have a boiler plate explanation ready. Look at the press release from any of these studios when James Gunn, Roseann Barr, or others were fired for comments. (For the record I do not care for examples like Kevin Spacey or others during the #metoo era. Terminations for sexual assault is completely justified, a world different than just speech.)

The press release on these firings always has something along the lines of "inconsistent with our values." Morally it appears great and the right PR move. Their values oppose racism, misogyny, sexism, and bravo for that. However, it also displays their values do not to allow people who think differently from them to keep their employment. a student of history could also see similarities to the Cold War Soviet Union, "These are not values of our party."

The point is we are cheering a company firing someone who does not agree with the way said company thinks. Liberals cheer because the beliefs of the terminated employee are repugnant. However, they miss the effect that we are allowing people to be fired simply for their personal views. So again, this creates a reality where, a corporation like Walmart can now legally terminate an employee for posting something on social media.

Who is to decide which comments are fireable and which are not? Apparently, the company. So, this allows the legal possibility that a Tweet negative about President Trump can be grounds for termination. And when asked, the company can respond with: "We here at Walmart respect the Office of the President. Unfortunately, our employee 'Lisa' did not agree with these values."

Gone, terminated, and other Walmart employees out of fear of termination will be silenced. And this is a reality liberals are helping to usher in. What if right now a large group of corporations released a statement, "We here at So and So do not agree with the destruction of personal property. Any of our employees caught attending a Black Live Matter rally and going against our company's values will be terminated." Will this fear not severely affect the power of movement?

As liberals we should respect how important having our voice heard without repercussions is. "I may not agree with your opinion, but I respect your right to say it," should be the motto for liberals. We should be fighting to protect employment regardless of our personal statements, not cheering when people get the ax for sharing their beliefs. We are willing to risk our power to protest over some Tweets that are bad jokes. This risk versus reward ratio is insane.

When I bring up this possible downside, the response is not an academic or legal argument, but a moral one. You say, "Yes, but those people are racists, I'm just saying I don't like a racist president." This eye of the beholder outlook is a dangerous slope to be on. Who determines what is obscene and what is moral is usually those in power.

The First Amendment is not in regards of what we deem moral, it is anything, because our founders knew if we dictate what is allowed speech, then the amendment does not really have any power.

Drew D'Amato is the author of the novels Social Studies and Bloodlines. He also has a masters degree in history, and has taught at the high school and college levels. When not writing he spends his time getting himself into trouble.
Related Topic(s): Boycott; Cancellations; Comedy; Culture; Culture War -s-; Dangerous; First Amendment Assembly; First Amendment Speech; Injustice; Liberals; (more...) Police; Police; Sports, Add Tags  (less...)
Add to My Group(s)
Go To Commenting
The views expressed herein are the sole responsibility of the author and do not necessarily reflect those of this website or its editors.

Christopher Columbus and the Statue of Limitations

Cancel Culture Threatens the Power of the First Amendment

Come for the Racial Justice, Stay for the Marxist State

Rape is Rape and Stupid is the Republican Agenda

Hail to Our Caesar