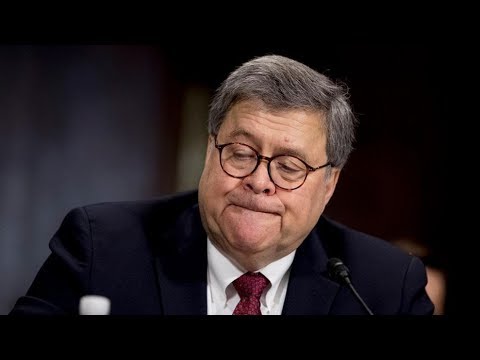 Bill Barr is covering up for Donald Trump.

Trump's first national security adviser, General Michael Flynn, met with the Russian ambassador to the U.S., Sergey Kislyak, just after President Obama had imposed sanctions on Russia for interfering in the 2016 election on behalf of Trump.

Flynn, according to news reports, told Kislyak that when Trump took office in a few weeks he'd do what he could to reverse the sanctions. As a result, on December 30, 2016, Russian President Vladimir Putin announced that Russia wouldn't retaliate against Obama's action: a rare event.

In any other time, a national security adviser who was taking around a half-million dollars from a foreign power to act on their behalf (as Flynn did with Turkey), and reassured another power that actions taken to defend the integrity of American elections would be reversed (as Flynn reportedly did with Russia), would be considered a traitor.

But not in Bill Barr's America.

Back in 2003, Pulitzer Prize-winning author and radio host Studs Terkel told me in an interview on my show that "hope dies last," a phrase that became the title of his last book. If there's an inverse to that saying, it's that outrage dies first.

When America learned that Richard Nixon had committed treason to become president, sabotaging LBJ's Vietnam peace talks in 1968, the outrage lasted a few days, but was then quickly forgotten.

When America learned that the Reagan campaign had committed treason by cutting a deal with Iran's Ayatollah Khomeini to deliver spare parts and weapons if they'd only hang onto the hostages until Reagan defeated Jimmy Carter, the outrage lasted a few days, but was then quickly forgotten.

LBJ lied to us about the Gulf of Tonkin; he's today remembered for the Great Society, the Civil Rights Act and Medicare.

George W. Bush lied to us about Iraq; he's today lionized by "never Trumper" Republicans on MSNBC as a statesman.

Jeb Bush rigged the Florida election in 2000; tens of thousands of African Americans were thrown off the voter rolls so his brother George could get within a few hundred votes of stealing the election; today Jeb's seen as an ineffectual but good-natured doofus.

Bill Barr recently pointed out -- as have tyrants and dictators before him -- that "history is written by the winners." He knows, because he's performed in this movie before.

Back in December of 1992, Special Prosecutor Lawrence Walsh was closing in on then-President George H.W. Bush for his complicity in the Iran-Contra crimes; Bush had fewer than three weeks left in office, and Walsh had already secured convictions and indictments against several Reagan/Bush apparatchiks.

Bush turned to his attorney general -- Bill Barr -- and asked what to do. Barr's advice was that Bush pardon everybody and thus kill the investigation altogether. Bush did it, and the screaming, all-caps, four-column-wide headline at the top of the December 25, 1992, New York Times front page read: BUSH PARDONS 6 IN IRAN AFFAIR, AVERTING A WEINBERGER TRIAL; PROSECUTOR ASSAILS "COVER UP."

Related Topic(s): Bill Barr; Democracy Decay; Investigation, Add Tags
Add to My Group(s)
Go To Commenting
The views expressed herein are the sole responsibility of the author and do not necessarily reflect those of this website or its editors.