As America grapples with the mind-boggling facts emerging from the Boston Marathon bombing, one thing is abundantly clear: the only people who made no excuses, as they did what they were asked to do, were the police.

Facing gunfire and improvised explosive devices, they kept closing on the threats, when every fiber of one's physical being is screaming self-preservation. Every police officer wants to see his kids one more time. Hold his wife's hand in a restaurant one more time. But your job is your job, and there can be no excuses.

You close, and do your job.

The FBI and other agencies are portraying their bungling of repeated Russian warnings about Tamerlan Tsarnaev as "requests for information." But here are the words from the FBI's own press release, at its own website, describing what the Russians told them. Russian intelligence stated that Tamerlan was:

"a follower of radical Islam and a strong believer, and that he had changed drastically since 2010 as he prepared to leave the United States for travel to the country's region to join unspecified underground groups."

The FBI has been forced to admit that it interviewed Tamerlan in early 2011, after initially denying it. Just two years before the wanton act which horrifically took many peoples' limbs, many of them young, he was sitting in the Joe Moakely Courthouse not a mile away, and looking agents in the eye. He had been discovered.

Then, incredibly, Russian intelligence initiated a number of further contacts with the FBI about Tamerlan, one as late as October 2011. We don't know exactly what they said, but we do know, as just shown, that the FBI describes affirmative statements of warning as "requests for information." Not surprisingly, this is how the FBI has also portrayed these multiple contacts.

If the story were to end here, until Tamerlan resurfaces as a suspect in the Boston bombing, the "Second Boston Massacre," it would be incredible enough. But it does not end. In 2012, exactly as the Russians warned that he was preparing for "travel...to join unspecified underground groups," that is what Tamerlan did.

This has not escaped the attention of the Chairman of the House Committee on Homeland Security, Texas Republican Mike McCaul. McCaul told Candy Crowley on CNN's State of the Union: The American people need to understand that the Chechen rebels are some of the fiercest jihadist warriors out there...they have also made an alliance with Al Qaeda.

McCaul reminded us that the jihadist creed espoused by Chechen extremists was not anti-American only in the abstract. Chechens have been active in Iraq. McCaul told Crowley that one of his constituents, a soldier, had been killed by nine Chechen fighters in Iraq. Chechen jihadists are not just talking about killing Americans. As McCaul put it, they are "in the fight."

Nevertheless, the FBI still did not see fit to deploy the massive surveillance and legal apparatus built since 9/11, much of it to the great consternation of civil libertarians. As an alien with a resident visa, nothing stood in the way of keeping Tsarnaev constantly under tabs, or summarily deporting him. Although US citizens enjoy fewer rights and privacy than ever before, the massive alphabet soup of agencies charged with "keeping us safe" failed utterly, miserably, and tragically, in the face of a steady stream of sirens that should have caused any rookie G-Man to lose sleep.

Representative McCaul told CNN, "If he is on the radar and they let him go, why hasn't a flag been put on him?" McCaul, using law enforcement jargon, is a former federal prosecutor.

Did Tamerlan cease to exhibit the warning signs of a violent jihadist when he returned from Chechnya? Again, this spiral to the depths of negligence and incompetence is almost bottomless. McCaul tells us: "he spends six months there, and one of the first things he does when he gets back is he puts up a website throwing out a lot of jihadist rhetoric."

So much for 'it was a false alarm, and Tamerlan is okay now.' More: the New York Times reports that Tamarlan was not just on one major watch list, but two.

When do Americans demand, without excuses, even a minimal job at counter-terrorism law enforcement? Before deploying thousands of more TSA agents to search children and people in wheelchairs in the name of "keeping us safe," when do we demand the professionalism that a bright college student could deliver, given the right tools? Our civil liberties erode and erode. In the Kafkaesque political reality we have come to accept, some politicians will argue that all this is proof that surveillance and police state tools must be expanded further still.

But all the law enforcement tools in the world, if this is what these tools are for, are to no avail if officials are fatally negligent, or incompetent, or both. FBI Director Robert Mueller should resign, if he has a sense of honor, or be fired. The American people must hold federal law enforcement to the same high standard as our local police, who, when the bullets, and then even bombs, were flying, made no excuses. 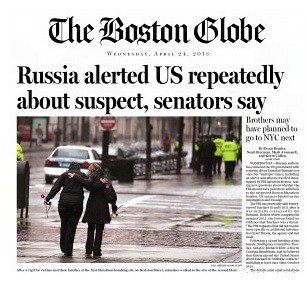 Related Topic(s): Boston; Boston Marathon Explosions, Add Tags
Add to My Group(s)
Go To Commenting
The views expressed herein are the sole responsibility of the author and do not necessarily reflect those of this website or its editors.