For sure, CDC Director Walensky and all key CDC personnel, barring holdover Trump appointees, are intelligent and highly qualified. Director Walensky's televised announcement on May 13, however, that fully vaccinated people need not wear masks or maintain social distancing in public, indoors or outdoors, was irresponsible. Director Walensky says that she is following the science, but that can be so only if she is wearing blinders and not taking a comprehensive view of public health. The course of an epidemic depends on human behavior as much as on anything else, but Dr. Walensky appears oblivious to the behavioral aspect of epidemic control.

One cannot assume that unvaccinated people will mask and stay socially distant in public places as the CDC directs them to. The directive complicates matters for businesses and for state and local public health authorities who need to implement rules on masking and social distancing in accordance with local conditions and behavior. 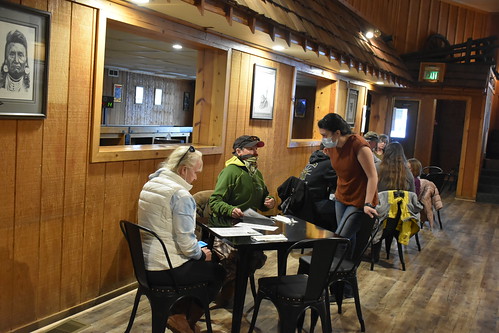 masked in a restaurant
(Image by TravelBakerCounty)   Details   DMCA

I suspect that the announcement was the result of political pressure, either real or imagined by Dr. Walensky, and that, with her appointment, the CDC is not fully emancipated from the political sycophancy that is its heritage from Director Redfield. There was no need and no point in the CDC's making any reference at all to masking at this point. As an epidemiologist, I cannot believe that more than a handful of epidemiologists can be found who would agree with her announcement.

Only about 35% or the US population has been fully vaccinated, and the rate of vaccination for adults has slowed drastically. There is a likelihood that a fourth to a third of the adult population never will get vaccinated unless it is mandated. (It is too early to foresee vaccination rates in children). On May 13, the daily number of new covid cases was about 35,000, still higher than its peak of 32,000 in the first wave in April, 2020, when New York City was ground zero. The rate will continue to decline, but not fast enough or far enough to prevent a resurgence unless mask wearing and social distancing are required in indoor public places.

Perhaps Dr. Walensky is optimistic because, along with new data from Israel on efficacy of the vaccines in preventing asymptomatic transmission, numbers of cases in the US have declined steadily for one month, indicating that the effective reproduction number, i.e. the average number of persons infected by one sick person in the population, is below one. This suggests that herd immunity is achievable and control measures can be lifted.

There are other factors, however. "Herd immunity" ought never to have been introduced into public discussion of the pandemic. It has been consistently misinterpreted and used, particularly by Fox News and by Trump advisor Dr. Scott Atlas, as a pretext for complacency and for believing that the disease will go away by itself, "like magic." Herd immunity depends on a homogeneously high rate of immunity geographically, both within and outside national borders, and certainly neither will be the case in the foreseeable future. As long as viral transmission still is occurring at all, an eventual recrudescence of the pandemic is likely from the waning of immunity over time, after six months, a year, or longer. A recrudescence also can occur when a new variant appears that can evade existing vaccine-generated immunity . See click here

Zero transmission worldwide ought to be both the epidemiological and the common sense goal for public health policy in order to eliminate the disease. SARS, the original corona virus pandemic, was eliminated by stringent containment measures, mainly in east Asian countries, without a vaccine. Containment was easier with SARS, because it was spread only by persons who already knew they were ill. But containment of covid-19 is not really difficult as long as all non-immune people wear well-fitting masks and observe social distancing in public indoor spaces. Having to wear a mask in a public place is not difficult and is no greater a restriction on personal liberty than being required to wear a shirt or shoes. Removing a requirement for people to wear masks is an act of liberation only for people who are really stupid. Unfortunately, a lot of people are, and they will continue to contract the disease and spread it to others, if allowed to.

With continuation of mandated personal protection measures, zero transmission of the covid virus is possible for a time. It has been achieved in several Asian and African countries, though, as subsequent outbreaks have shown, the disease cannot be eliminated permanently until it is eliminated worldwide so that it will not be reintroduced by travelers.

Full elimination of covid-19 likely will not occur until most of the world's population is immunized, but transmission rates can be kept at a very low level meanwhile by continuing simply to require masking and social distancing for people indoors in public places.

The number of new cases per million population in the US on May 13, 2021, was 107, while it was 1.3 in Uganda, 1 in Vietnam, 0.5 in Taiwan, 0.4 in Australia, and 0.3 in New Zealand. None of those countries has anywhere like the proportion of its population immunized as has the US. The US, with all its resources, its expertise, and its head start in immunization, ought to aim to reduce its rate of infection as near to zero as it is in those countries by the end of this year. The 7-day rolling average deaths per day in the US still is above 600. It is declining slowly, but still thousands more deaths are inevitable this year that would not need to occur if the infection rate were near zero.

I am 79 years old and am fully vaccinated. The 5% chance that I do not have full immunity presents too great a risk at my age for me to expose myself to unmasked unvaccinated people indoors. When I enter a restaurant and remove my mask to eat or drink, I do not want others near me not to be masked, knowing that probably less than half of them are fully immunized. If everyone not fully immunized stayed masked and kept socially distant, in accordance with the new CDC guidance, it would be okay for me to be in a restaurant, but that is not the real world. Unvaccinated people not wearing masks may think that having to wear a mask is an intolerable restriction on their freedom, but it is a much greater restriction on my freedom that, after 15 months of pandemic restrictions, and being fully immunized, I still cannot safely dine in a restaurant.

Following Dr. Walensky's irresponsible announcement, spikes of cases, particularly in states and communities with low vaccination rates, are inevitable. Thousands, possibly tens of thousands more cases, and hundreds more deaths, are an inevitable result of her announcement, unless she emphatically retracts it. I call on her to retract her announcement and ask all epidemiologists and public health professionals to join me.

Andy Silver, MA, MSPH, is a retired unAmerican epidemiologist. In 1965, horrified by reports of American atrocities in Vietnam and the overwhelming public support for them, he decided that he was living under enemy occupation and that (more...)

Related Topic(s): Centers For Disease Control CDC; Covid-19; Death; Epidemiologist; Herd Immunity; Immunity; Liberty; Masks; Pandemic; Social Distancing; (more...) Vaccinations, Add Tags  (less...)
Add to My Group(s)
Go To Commenting
The views expressed herein are the sole responsibility of the author and do not necessarily reflect those of this website or its editors.

STAY IN THE KNOW
If you've enjoyed this, sign up for our daily or weekly newsletter to get lots of great progressive content.
Series: "Preventing deaths from covid-19"

Trump in a Time of Pandemic: The Banality of Evil

COVID-19 Deaths Not Surging in the US

Networks ignoring the most important news about covid-19