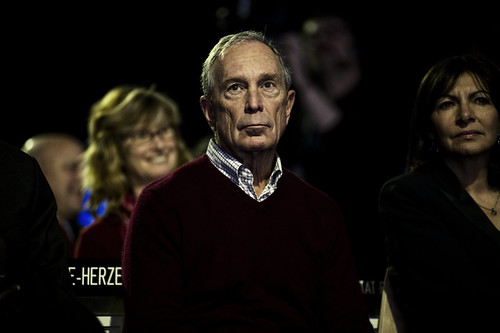 Bad enough that a tyrant is destroying American democracy. Now an oligarch is trying to buy the presidency.

Michael Bloomberg's net worth is over $60 billion. The yearly return on $60 billion is at least $2 billion - which is what Bloomberg says he'll pour into buying the highest office in the land.

I'm not saying that great wealth should disqualify you from becoming president. America has had some talented and capable presidents who were enormously wealthy - Franklin D. Roosevelt, Teddy Roosevelt, John F. Kennedy, for example.

The problem lies at the nexus of wealth and power, where those with great wealth use it to gain great power. This is how oligarchy destroys democracy.

So far, Bloomberg spent over $380 million on campaign advertising. That's more than Hillary Clinton spent on advertising during her entire presidential run. It's multiples of what all other Democratic candidates have spent, including billionaire Tom Steyer.

Encouraged by the murky outcome from the Iowa caucuses and New Hampshire primaries, Bloomberg has doubled his spending on TV commercials in every market where he is currently advertising and is expanding his campaign's field staff to more than 2,000.

That's not the only way he's using his billions to co-opt the election. He's been endorsed by House Democrats and Democratic mayors who were the beneficiaries of his fortune during their campaigns. He's also paying social-media "influencers" with large followings to promote his campaign.

His paid staff is already three times as large as Trump's, five times Joe Biden's. He's using his fortune to woo staffers away from other campaigns.

Meanwhile, the Democratic National Committee is putting Bloomberg onto the debate stage by abandoning the individual-donor threshold that it used for the first eight debates, presumably because Bloomberg - the self-funded billionaire - doesn't take donations.

To participate in the Feb. 19 debate in Las Vegas, Democratic candidates need to show at least 10 percent support in four national polls. Bloomberg's wall-to-wall advertising makes that pretty much inevitable. He recently came in third place in a Morning Consult tracking poll, behind just Sanders and Biden. And he's in the top four in many Super Tuesday states.

Bloomberg has some attractive policy ideas about gun control, the environment, and a more progressive tax.

But he's also a champion of Wall Street. He fought against the reforms following the near meltdown of the Street in 2008. His personal fortune is every bit as opaque as Trump's. Through his dozen years as mayor of New York he refused to disclose his federal taxes. Even as a candidate for president, he still hasn't given a date for their release.

And because he hasn't taken individual donations, hasn't appeared on the debate stage, and bases his entire campaign on TV advertising, he isn't being held accountable for his despicable record on race and criminal justice - the discriminatory stop-and-frisk policy he implemented when he was mayor, or his defense of red-lining.

Related Topic(s): Democracy; Election; Money; Oligarchy; Politics, Add Tags
Add to My Group(s)
Go To Commenting
The views expressed herein are the sole responsibility of the author and do not necessarily reflect those of this website or its editors.