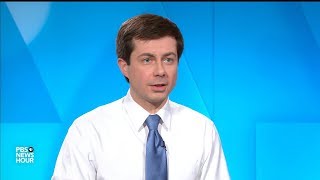 On Wednesday the New York Times published a Democratic presidential forum of video interviews, including the hot potato: "Do you think Israel meets international standards of human rights?" And even the Times seems a bit surprised by the result:

"we thought this question would gauge Democrats' willingness to criticize Israel, and found few candidates who would do so."

Yes, what is most striking about the candidates' short responses is the extreme reluctance to say a word critical of Israel's human rights abuses. The exceptions were Bernie Sanders (though not as critical as he was to the AJC); Rep. Seth Moulton, who kinda stands up for Betty McCollum's bill that would strip funds from Israel over its detention and interrogation of children; Tulsi Gabbard; and the surprise South Bend Mayor Pete Buttigieg, who all but answers the question, No. Israel's record is "problematic and moving in the wrong direction."

That's straight talk. Those who advocate for Israel include Kamala Harris, who gives Israel an A ( as we noted yesterday); Elizabeth Warren, Amy Klobuchar, Kirsten Gillibrand, Bill de Blasio, and Beto O'Rourke. It seems like it's OK to knock Benjamin Netanyahu, but Israel is still a "beacon" in the Middle East, as Klobuchar says, and everyone is for a two-state solution. That is the safe talking point in the Democratic Party.

Surely the biggest disappointment here is Elizabeth Warren. You'd think she could be more critical given her progressive base, but no, Warren talks about what a tough neighborhood it is and gives Israel kudos as a liberal democracy and ally. "Israel is in a really tough neighborhood. I understand that. They face enormous challenges, and they are our strong ally."

As the NYT itself notes, younger Dems are questioning the party's reflexive support for Israel. Buttigieg seems the most aware here. So why are these other Dems folding? They are "squeezed between a pro-Israel legacy and a donor class that is more supportive of Israel on one side and an activist base that is far more critical of Israel," as Michael Koplow has observed; and guess whose side they're on! (And no wonder Mike Gravel is such a leader in the discourse).

Here are some of those answers (I've largely taken the transcripts from Jewish Insider's work; with small fixes and amendments).

Buttigieg is concise and critical.

I think that Israel's human rights record is problematic and moving in the wrong direction under the current right-wing government. Look, the U.S. can be committed to Israeli security and to the U.S.-Israel alliance while also guiding our ally in a direction that leads toward peace. I am very worried, especially with some of the latest talk about annexation of the West Bank that their government is moving away from peace in a way that is damaging in the long run to Israeli and Palestinian, and for that matter, American interests.

Kirsten Gillibrand is an out and out supporter. "Communities where Palestinians are living" that's a lot of words to avoid saying occupation or Palestine.

I do [think Israel meets human rights standards], and I believe that Israel is our greatest ally in the Middle East, but we also have to care about her neighbors and make sure that we address the humanitarian crises throughout communities, including those where the Palestinians live right now. I think we have to do far more to relieve the suffering in places like the West Bank and Gaza. I think it's important that we continue to provide humanitarian support, but I think what President Trump has done in the Middle East is very damaging. He's done things prematurely outside of a long term negotiation for a two-state solution, and I think that has created more risks of enormous problems and issues for long term stability.

Amy Klobuchar is also a big fan of "our beacon of democracy," though she criticizes Netanyahu:

Yes [Israel meets human rights standards]. I think Israel, however, under Prime Minister Netanyahu has been doing things that are not helpful to bringing peace to the Middle East. The way that he came out in favor of annexing the Golan Heights, what he has done when it comes to the settlements, the fact that we are not engaging in serious discussions for a two-state solution, our country and the Palestinians and the Israelis, I think that this is setting us back. And so what I would do is to reach out to restart those negotiations again. I think that President Trump has politicized this issue and has not helped in terms of American support for Israel. Israel is our beacon of democracy in the Mideast, and we have a role to play here that is very important and it shouldn't be politicized the way the Trump administration has politicized it. And when Israel does things that I think are against public policy and international policy, I will call them out on it and I will work with them. But again, I think the way President Trump has done this has made it harder and harder for people to support Israel, and you are seeing a lot of young people that have fallen away from supporting this beacon of democracy in the Mideast, and I think that needs to change.

Notice that Cory Booker goes right to a more important question to him than human rights, the fact that Israel is dividing the US discourse now, and that's not a good thing. And the impediment to a two-state solution is Trump, not Israel. He can't even go after Netanyahu.

Philip Weiss is a longtime writer and journalist in New York. He co-edits a website on Israel/Palestine, Mondoweiss.net, which he founded in order to foster the movement for greater fairness and justice for Palestinians in American foreign policy. He is currently working on a novel about the US in Australia during WW2.
Related Topic(s): Humanitarian Crisis; Israel And Palestine; Israel Firsters; Israel On The Potomac; Israel Runs Washington; Peace; Two State Solution, Add Tags
Add to My Group(s)
Go To Commenting
The views expressed herein are the sole responsibility of the author and do not necessarily reflect those of this website or its editors.