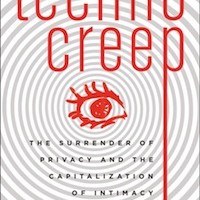 The Internet of Everything: Giving Ourselves the Creeps

Imagine: You leave your house for work and the light sensor over your door records the time and snaps a picture. You hop into your car and before it will start a quick substance-abuse check is performed as you hold the steering wheel. Once you're allowed to drive, your car's "black box" records your speed and braking habits, and sends a graph to police analysts and your insurance company. Your car and Android pass on your GPS coordinates to some unknown Authority and to Google, who turns around and sells the information to target marketers. At a traffic light your licence plate is recorded, along with a thermal image showing how many passengers are in the car. In addition, an unseen drone overhead zooms in your face and reads its mood and 'tone' and matches it up against that day's 'known threat types' in a disposition matrix. Still sitting at the light, you look left to see a teen in the next car wearing Google Glasses and recording your face; indeed, a few moments later, Instagram notifies you that your expression has been entered in a daily polling contest and already has 5 up-thumbs. Your car radio senses your rising anxiety and begins playing some easy-listening tunes to calm you. Dread of work begins to envelop you--having to face the eye scanner to enter the building and the finger-print scanner to log on to your PC, and where you'll be careful of how you answer emails, extra-conscious of how you speak on phones, afraid to use the coffee machine, because it counts your cups and sends stats off to a work-productivity study with unknown ramifications. And the coworker in the cubicle opposite you keeps flashing you a proud new prosthetic vagina that was extruded from a 3D-printer at home. You decide to call in a sickie and turn the car around. Sensors and alarms go off. Your car questions your move. An app pops up on your Android and scans your features. You make it home, the light sensor recording your return, alone. You go into the kitchen and the fridge immediately calls out that 'milk is low' and your open laptop has a pop-up list of items needing replenishing that your fridge has passed on. You piss and the toilet tells you how many blue flushes are left. You take to bed and curl up in the foetal position, your blanket warming to an 'optimal soothe'. Your bedroom lights read your distress and come on and a floating voice asks you over and over if you are okay, while simultaneously passing the moments on to your insurer, which immediately alerts a counsellor, whose voice in the room now says you need to spend more and sends you a scrip for Valium and a set of discount coupons that you hear arrive in your Inbox with a mystical ding...

Once upon a time this vision qualified as dystopic and its message cautionary. But as Thomas P. Keenan makes clear in Technocreep: The Surrender of Privacy and the Capitalization of Intimacy, we have entered a new Kuhnian paradigm that doesn't necessarily include a future for the human species--at least as we know it. As Keenan puts it, the digitalization of humanity is now as unstoppable as climate change. Its impact can be reduced with certain uncomfortable adjustments, but the lag in any collective action will make it utterly reactionary and useless.

Keenan lays out the evidence calmly, methodically and without polemics: he lets the evidence speak for itself. This is not to say the book is devoid of humor -- far from it! But his wit, like his politics, takes a back seat to the civil and civic-minded purpose of his endeavor. In 15 separate but related areas of human activity, Keenan provides examples of the way technology is bleeding over into the very essence of human life. He makes a convincing case that humans' capitulation to the Machine has been, like the switch of data transmission from analog to digital, welcome, blind and unstoppable. And we have been hurtling along ever faster since.

Thomas Keenan is himself a lifelong technologist, with roots in the birth of modern computing in the 1950s, so his understanding of the current landscape carries the weight of developmental insights. He expresses his thesis more as a set of observations than as a theoretical proposition. He begins by stating his purpose:

So much is happening that is out of our view and beyond our control. Like a network of mushroom spores sending out subterranean tendrils to silently exchange genetic material, our technological systems are increasingly passing information back and forth without bothering to tell us.

Far from warning the reader about the imminent doom, a la Orson Welles' infamous Martian Invasion radio broadcast, Keenan assumes an intelligent readership and presents his case in a provocative but personal manner. "This book," he writes, "is about the unseen ways in which technology is already changing our lives."

Then we come to technology and what is 'creepy' about it. The term 'creepy' is popularly associated with dark sexual auras that play on one's fears, but Keenan has a more nuanced take, likening it to what Freud describes as "The "Uncanny." In his essay by the same name, Freud describes "a quality of feeling" and "that class of the terrifying which leads back to something long known to us, once very familiar," a world of 'doubles' shadows and the occult, or what Julia Kristeva calls the magical realm of the 'semiotic' that precedes object-relations and the 'symbolic'; the realm of the infantile. The 'creepy' seems to activate the 'uncanny' presence of that archaic realm of doubles, of objects brought to life by the mechanisms of desire.

What follows in Keenan's book is a grand parade of creepiness: Intelligence Creep, in which 'the line between machine and human thinking is blurring' and we are confronted with the unsettling experience of an object exhibiting realistic human behavior; Camera Creep whether thermal imaging that can 'see' through buildings and surveillance systems to thwart terrorism is being co-opted by commercial interests; Image Creep, whereby 'your face is becoming a key that unlocks a vast amount of personal information about you'; Sensor Creep, with its Internet of Things that conspire to anticipate (your) needs and desires; Tracking Creep, with its ubiquitous RFID chips and real-time bidding by corporates for 'access to your eyeballs'; Sensation Creep, with its Pavlovian popcorn piped in to make you desire; Bio Creep, with its DNA profiling and databasing; Body Creep, with its fingerprint scanners and promise of coming-soon 'software-based humans'; Time Creep, such as the time-lining of one's everyday existence so that every moment is accounted for; Government Creep, not only with mass surveillance but with the manipulation of collected data for political purposes; Deception Creep, wherein language is drained of meaning and 'you never really know who or what to believe anymore'; Physible Creep, as with 3D printers, which imply that 'now, within reason, anything can be anything else; Child Creep, where overexposure to the Internet is destroying the privacy of childhood; Pet Creep, where cosmetic testicles help repair the damage done a pet's spayed ego; and, Robot Creep, whether allowing kids to hack the nervous systems of ants or robotic sex workers replacing human prostitutes.

What is most cause for concern in the area of Intelligence Creep, where quantum and neural network technologies abound, is that despite still requiring human sequential input the "apparent paradox is that many computer programs have already surpassed the comprehension of any one human mind." It should be clear that such paradoxes represent a real danger, once you get past the euphoria of Geek bliss and narcissism. For such programs are capable of locking us out of key systems we put them in charge of overseeing.

Related Topic(s): Douche Bag; Electronic Privacy Information Center; Freedom Is Not Free; Full Spectrum Dominance; Internet Shutdown Or Censorship; Internet Tips Tools Techniques; Marlon Brando; Mental Health Privacy; Privacy; Rudolph Giuliani, Add Tags
Add to My Group(s)
Go To Commenting
The views expressed herein are the sole responsibility of the author and do not necessarily reflect those of this website or its editors.