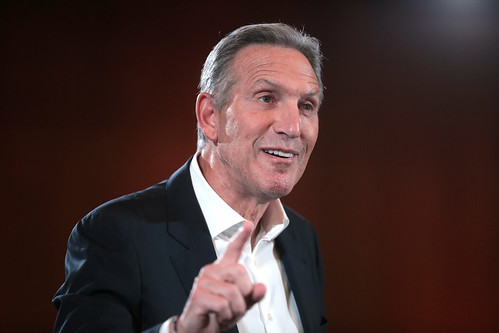 Howard Schultz is the man of the hour. He's done something very few have been able to accomplish and what's more, he did it in one day. Howard Schultz announces he's thinking about running for President as an Independent and almost instantly unites the Democratic Party. Why sure, that's what America needs right now, another billionaire in the White House. Schultz the former Starbucks CEO figures any country willing to buy fifty cents worth of coffee, syrup and artificial ingredients for seven dollars while talking about saving the world and going vegan will buy"anything.

Schultz's campaign lurched from a standing start with a vanity book tour to cheers of; "Don't help elect Trump, you egotistical billionaire a**hole!" That should be his campaign slogan VOTE Schultz, just another egotistical billionaire a**hole! But in all honesty, if you wanted to do something and you had a billion dollars in your back pocket and you thought to yourself, I couldn't possibly do that! And then"you saw Donald Trump do it. It would be perfectly normal for a billionaire to think; "Why, if that moron can!" But billionaires running for office is all the rage, everyone down at the club is doing it. And four out of five billionaires agree on two things, you can't get elected as an Independent and we can't afford socialized healthcare for Americans.

Former Mayor Michael Bloomberg says he considered the idea of running but abandoned it because it couldn't be done. But it could be done, just but not by the likes of Michael Bloomberg and defiantly not by Howard Schultz. Trump proves it. A dangerous person in a gorilla suit with a billion bananas in their back pocket singing a siren song of mom, apple pie and the good ole days with Fox News singing harmony could get elected. Now imagine a sinister and competent Trump, capable of listening to experts who play chess instead of checkers. Trump's incompetence is actually his most redeeming feature and we should be grateful for it.

But Trump agrees and stands united with his billionaire brethren. In fact, its unanimous! Billionaires with a net worth in excess of a thousand million dollars agree, we can't afford healthcare for all. Never mind all the countries who do it all over planet Earth and not just first world powers, but India and Croatia. As an aside, I was a twelve-year-old kid in the teeth of the Apollo program. There was a positivity about it all, America could do anything, we could even put a man on the moon. Today, we struggle keeping up with Croatia. It will bankrupt us the billionaire barons shout.

Every year in this country one million Americans file for bankruptcy due to medical bills. Social medicine isn't some crazy idea designed to supplant a golden glittering system. It is an idea to fix a disaster. The system as it stands works great"until you get sick. Once sick, you're drawn into a healthcare matrix. In a dystopic netherworld of money, monopoly and bureaucracy. I recently thought I had a kidney stone, so I called a Urologist for an appointment. Actually, I called a lot of Urologist's as three weeks was the earliest appointment available. Now, if you've ever had a kidney stone, you'll understand that three weeks is like saying we can fit you in about three hundred years. I eventually found an appointment in five days with the only alternative being the emergency room.

The doctor confirmed the stone with an MRI and scheduled an outpatient surgery in a hospital downtown. On the day of my appointment, I exited the Interstate highway listening closely to the GPS. The directions took us to an office building. Checking the address, we tried again. We asked a policeman and he wasn't sure. Turns out it was one of those streets that stops and then picks up again in a couple of blocks. On the street were two other hospitals and this weird idea came to me amidst driving around downtown for an hour looking for a hospital. Put up signs! Wow, what an idea. One hour looking for signs and finding none. Obviously, we found the hospital and found the sign a top the twelfth-floor. A big neon job must have cost a million dollars pointing in the other direction at three in the afternoon. But by now being a few minutes late, my wife let me out at the curb, and I dashed through the door presenting myself at the front desk. The receptionist looked for my name and the name of the clinic and then said, "It's across the street." Really, I asked, really! (I wasn't feeling very good at this point.) She smiled and said, "It happens all the time!" I was late and didn't have time to tell her what I thought about a hospital where people regularly go through the wrong door. Something along the lines of "Why don't you fix that! You know, maybe put up a sign!"

We entered into a waiting room rivaling the Palmer House in Chicago. High ceilings exotic chandeliers with lush pastel furnishings. Everything had a laid-back vibe to it; we're the hospital baby and we're cool. At the end of the room three women sat robotically smiling behind a desk. Checking in they said, have a seat and chill out. Well, they didn't actually say that but that was the vibe. I was supposed to be there at three and it was now a quarter to four"and we were early. The doctor had a procedure which had run long so they put me in the obligatory hospital gown and stuck me in a six by ten room with all manner of expensive medical devices I would never need involving a kidney stone. There I sat for the next four hours in a hospital bed hemorrhaging money.

Hey, guess what! Turns out after an examination and an MRI I didn't have a kidney stone after all! Can you beat that! I had a collapsed ureter and somehow that big expensive MRI machine missed it. The procedure itself didn't take long installing a stint. Still groggy from the anesthetic I was rolled to the curb. I looked like Johnny Dep on ether from "Fear and Loathing." Did I mention my wife is night blind? That was the reason we scheduled an afternoon appointment. Of course, a hospital that doesn't put up signs would never stop to ask if there might be a problem if your ninety-minute procedure runs a little long, like say six or seven hours long. I began to feel better and then I got a letter from a collection agency. "Dear sir, it appears your insurance company has refused this claim. You should contact your insurance company immediately to find out why this claim has been refused.

They filed the claim with the wrong insurance company. They had my phone number and they had my employer's number but never thought to call and ask, "Say we're having a problem with your claim, can we review your information?" Do you see a picture forming here? A machine that sees no fault itself, if you ran a Midas Muffler shop like you'd go broke!" But this is a Monopoly, they can charge whatever they like as many times as they like. You get your hospital bill for $327.00 in lab fees and a week later you get another bill $92.00 in lab fees from XYZ Laboratory Consultants Limited LLC. Okay see, that was the guy who sent your lab results via email from the lab's computer to the doctor's laptop computer.

All in, a little more than twenty thousand dollars for a ninety-minute procedure. My share was more than four-thousand dollars. The billionaire boys club is right, with a health care system like this America can't afford Social Healthcare. I've been in the hospital twice in twenty years and both times I was misbilled. That's a 100% failure rate. The first time, they photocopied my insurance card and then failed to attach it to my file. Rather than call and ask, they just put "uninsured" in the box and let it go. Not their department, not their worry. I had to hire an attorney to get the bill corrected but I never got an apology for all they put me through because of their bureaucracy.

The beneficiaries of the system will never correct it, to Bloomberg healthcare means stocks to buy and sell. To Schultz health insurance is something to avoid supplying because it hurts the bottom line. Think about that, the employees that made you a billionaire are hurting your bottom line by trying to stay alive. To those which much is given much is expected. Think of the good you could do with a billion dollars, think of the people you could help with a billion dollars or you could be Howard Schultz. A recent poll in Michigan showed that any Democratic candidate in 2020 would beat Donald Trump. The Democrats could run a headless Frankenstein and still beat Donald Trump. We have an opportunity for real change in 2020. This is not the time centrists or moderates. Billionaires need not apply!

Related Topic(s): America; Billionaires; Bureaucracy; Change; Democrats; Healthcare; Hospital; Michael Bloomberg; Money; People, Add Tags
Add to My Group(s)
Go To Commenting
The views expressed herein are the sole responsibility of the author and do not necessarily reflect those of this website or its editors.