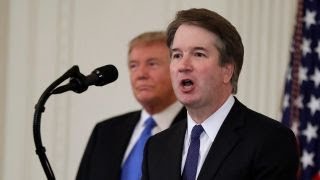 You know who I never meet when I'm on the campaign trail? People who think that Washington should be doing MORE to help huge corporations.

Washington already works like a dream for the wealthy and the well-connected. Our courts have been no exception, delivering blow after blow to working Americans while making sure that the rich and powerful get to call the shots.

And it could get worse -- if Brett Kavanaugh ends up on the Supreme Court. He's a walking, talking, gift-wrapped present for powerful interests, with a big bow on top. When right-wing billionaires look at him, big green dollar signs dance in their eyes.

Just minutes after Donald Trump announced his nomination, the White House sent an email to corporate groups across Washington bragging about Brett Kavanaugh's rulings in favor of corporate interests and against everyone else. They're not even hiding it.

So, right now, a right-wing dark money group called the Judicial Crisis Network is spending millions of dollars on ads to try to stick Brett Kavanaugh on the Supreme Court.

If they succeed, he could issue decades of rulings that coddle corporations and kick dirt in the faces of workers. We need to fight back to stop the corporate takeover of the Supreme Court.

It's clear: Brett Kavanaugh would continue to tilt the scales of justice in favor of the rich and powerful and against everyone else. Don't take my word for it -- look at his record:

Lately, the Supreme Court has delivered more victories to corporations -- and more punches to the gut to working people -- than any institution in Washington. And it's gotten worse since Neil Gorsuch, a virtual clone of Brett Kavanaugh, was snatched straight from big business's wishlist and plopped onto the Supreme Court.

There's too much at stake to let Brett Kavanaugh on the Supreme Court. Soon, he could be deciding whether insurance companies can discriminate against people with pre-existing conditions, whether giant corporations can poison the air we breathe and the water we drink, and whether the Supreme Court will continue to break the backs of unions.

His record is clear. We need to fight to make sure that the Supreme Court doesn't get stacked with another Justice who'll cozy up to the rich and powerful.

And I'm in this fight all the way.

On the night when Donald Trump nominated Brett Kavanaugh, I went to the steps of the Supreme Court to join the rally against him. Behind us, carved in stone, the building promised "Equal Justice Under Law."

But there's only one way to make sure that everyone -- not just the richest Americans -- will get treated fairly in our courts: We need to reject corporate-coddling nominees like Brett Kavanaugh.

We can't win if we don't fight. Brett Kavanaugh could swing the history of the Supreme Court. When we look back on this moment, we need to be able to say that we fought on the side of equal justice for all. Raise your voice and tell the Senate to say NO to Brett Kavanaugh.

Right-wing billionaires want their dollars to do all of the talking. But in a democracy, our voices matter. And there are more of us than there are of them.

Related Topic(s): Billionaires; Corporations; Judge Brett Kavanaugh; Signatures Needed; US Supreme Court, Add Tags
Add to My Group(s)
Go To Commenting
The views expressed herein are the sole responsibility of the author and do not necessarily reflect those of this website or its editors.