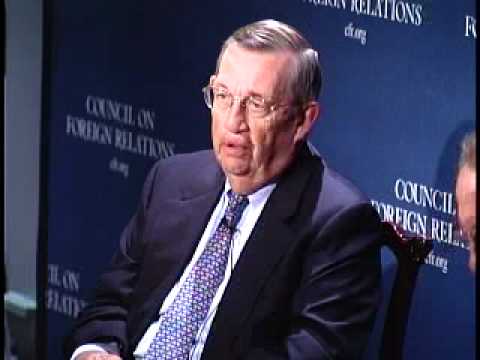 On some long-distant day when some as-yet-unborn historian sits down to write the story of climate change -- the story of the greatest crisis humans ever faced -- it's possible that they'll choose an anecdote from this past week as a way into the story. Amid the coronavirus pandemic, it understandably didn't get much notice, but JPMorgan Chase announced on Friday that Lee Raymond will no longer serve as the lead independent director of the world's largest lender to the fossil-fuel industry.

I've told the backstory at much greater length here, but, briefly: Raymond was a key Exxon executive from the nineteen-eighties onward -- the years when the company was one of the most profitable in the world. (If you want a full account, read Steve Coll's majestic "Private Empire.") Those were also the years when Exxon's scientists discovered -- before it was publicly an issue -- that climate change was real and dangerous, and when Exxon's executives decided to join with others in the industry to cover up that truth. Raymond gave the single most audacious speech of the era, telling a World Petroleum Congress audience in 1997, on the eve of the Kyoto climate talks, that the planet was cooling, and that it made no difference if we acted then or waited a quarter century.

Raymond retired from Exxon as C.E.O., in 2005, having earned a reported six hundred and eighty-six million dollars; in his retirement, his job was to help run the board at Chase. Advocates have urged Chase to remove him as lead independent director because of his climate-denying past, and last month the New York City comptroller, Scott Stringer, joined the fight, pledging to vote the city pension fund's Exxon shares against Raymond; he persuaded the New York State comptroller and the Pennsylvania state treasurer, in turn, to join him. One can only speculate, but this clearly put pressure on giant investors such as BlackRock, who have been making climate-friendly noises; in any event, as the Financial Times reported, Chase has removed Raymond from his position, though he remains on the board.

The effect is probably practical and definitely symbolic -- Raymond's removal ratifies the notion that, after a decade of relentless campaigning by activists, Big Oil is no longer quite as big. It's true that, in the same week, much of the industry got the bailout that it had been asking for from Washington. But that was scant cause for celebration: the International Energy Agency released new numbers, predicting that global oil demand would drop nine percent this year. As economists at the Institute for Energy Economics and Financial Analysis pointed out, the fossil-fuel sector really faces long-term solvency problems, not just short-term liquidity woes. Demand growth had been slowing in recent years, as regulatory pressure began to mount, as a result of all that activism, and as renewable energy got cheaper. Even before Covid-19 really bit, Exxon had been "humbled," according to Bloomberg Businessweek, becoming a "mediocre" company. Now it seems entirely likely that we have seen peak oil demand, a moment that the oil companies had predicted wouldn't come for decades. Here's the energy analyst Kingsmill Bond's precis: "If demand for fossil fuels bounces back in 2021 by half the amount it fell in 2020, and grows at 0.5% a year, it would take eight years to get back to where the industry started. And in the meantime, the renewable energy revolution has not stopped."

This process will accelerate in places where governments rebuild their economies with Green New Deals, and lag in places where a move back to private cars combines with cheap gas prices to keep the S.U.V. era alive a little longer. But the key point is that, as the industry flags, so will its political power. "The ability of the industry to dictate to governments will weaken," Bond said, "and the capacity of incumbents to frustrate the growth of renewables will reduce." Exit Lee Raymond, stage right.

Vanessa Hauc took over in March as the anchor of Telemundo's weekend newscast, but she didn't give up her other role, leading the Spanish-language network's environmental-investigative unit for its remarkable program "Planeta Tierra." She's also notable for the fact that, in February, she was the first climate journalist chosen to ask questions at a Presidential debate.

Every poll shows that Latinx Americans are the group most concerned about climate change in the country -- why?

The climate emergency is affecting everyone on the planet, but not equally. It disproportionately impacts the most vulnerable populations -- women, children, and minorities, among them Latinos. Here in the U.S., half of our community lives in the 25 most polluted cities in the country, and in neighborhoods that are close to factories and refineries with high levels of pollution. Latino children are 40 percent more likely to die from asthma than non-Latino white children. Our communities work in sectors that are directly impacted by heat waves and extreme-weather events, like agriculture, construction, and landscaping. For us, the climate emergency is a reality affecting not only where we live but where we work. Still, I see my community as a powerful force of change. We care deeply about the environment. Our connection with nature is ancestral -- it's in our DNA. I still remember my trips to the market with my grandmother, in a small town in Colombia, where all the fruits and vegetables were organic and sold to us by local farmers. I remember she didn't use a plastic bag but a costal, a bag made of dry leaves to carry practically anything. Many of my dresses first belonged to my sisters. I then passed them on to my cousins in Peru. We walked when we could, we shared rides, and food was the center of family gatherings. We feasted around my grandmother's delicious recipes from Peru.

Many Latino families are like that. We recycle by nature. We believe in conservation, and no food will go to waste in our homes. We are a community that is ready to act on the climate emergency and that wants to be a part of the solution. The challenge we face is to insure that those communities have a platform and the necessary resources and information to work on solutions and live sustainable lives.

What are the other issues that really draw a strong response on "Planeta Tierra"?

"Planeta Tierra" shines a light on the greatest challenges we are facing today, from plastic pollution to the loss of biodiversity and deforestation. But we frame our stories on solutions. We look for the stories of people who are making a difference. For example, entrepreneurs who are rethinking their way of doing business and creating more sustainable products. We interviewed a fashion designer in Mexico who is creating leather from the leaves of nopal, a traditional Mexican vegetable. We also ran a story about a factory that is producing plastic out of avocado seeds. We recently highlighted the work of women who are redesigning our food systems to make it healthy for us and for the planet, too. The story of our changing planet can feel overwhelming. Many of us have felt paralyzed in front of the magnitude of the challenge it presents. Therefore, as a journalist, my job is to inform my viewers about our changing climate in the most rigorous and scientific way. But, as an environmentalist, my job is also to give them hope, to empower them to be part of the solution, to offer the tools and information they need to really be agents of change.

Bill McKibben is the author of a dozen books, including The End of Nature and Deep Economy: The Wealth of Communities and the Durable Future. A former staff writer for The New Yorker, he writes regularly for Harper's, The Atlantic Monthly, and The (more...)
Related Topic(s): Climate Crisis; Energy; Environmentalist; Exxon; NASA; Oil; Pandemic; Pollution; Trees, Add Tags
Add to My Group(s)
Go To Commenting
The views expressed herein are the sole responsibility of the author and do not necessarily reflect those of this website or its editors.