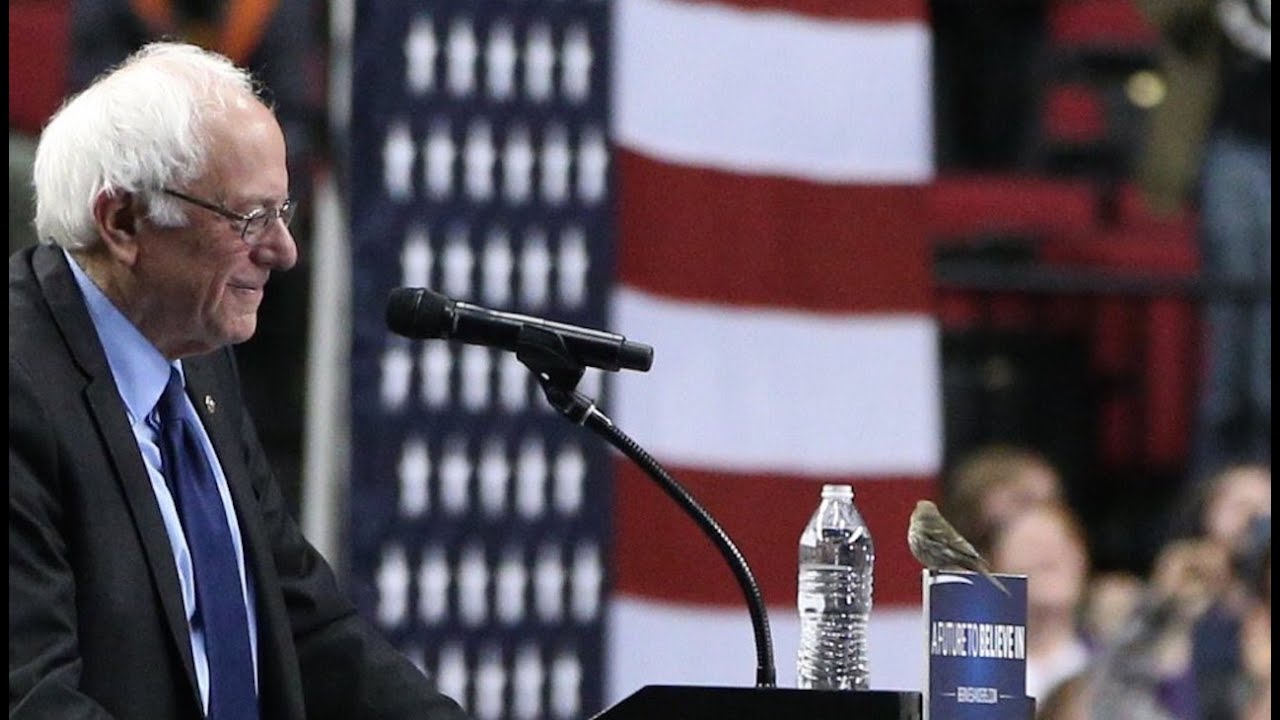 Bernie and the birdie, Portland 2016
(Image by The Young Turks)   Details   DMCA

Of course, this will no doubt come across a "wet blanket" effect for all the great rejoicing going on based on the B-H victory. BTW--I too joined in this effort to replace Drumpenfuhrer, guided especially by even such major intellectual powerhouses as Noam Chomsky, that Drumpenfuhrer was immeasurably dangerous, and to me definitely one of the lowest human beings could go, with not remotely a single redeeming feature. But there is no reason whatsoever to forget that it is business as usual for the Duopoly, and its job of fleecing this country and world by driving billions to poverty, and worst of all, generating (dually) many, many more criminal wars, which is their greatest forte.

I was actually telling my son and daughter last night, even as we gathered as a family to listen to KH and JB deliver their victory speeches, that I would hope (perhaps against hope) that either of these two "winners" would take at least a few seconds from their speeches to acknowledge that all the plaudits they were claiming for "a record voter turnout", etc. etc- NONE OF THIS WOULD HAVE HAPPENED WITHOUT THE RELENTLESS, SELFLESS CAMPAIGN of Sen. Bernie Sanders (whom I will always describe as the best candidate BY FAR to have run, most admirably, winner-like, for the dubious office of POTUS), and who was by common effort by the DNC, BO and others, derailed from the run so that the shameless, murderous Duopoly would remain intact. Both in 2016 and this time, I have never failed to notice how Sen. Sanders had the highest poll ratings in terms of winning the POTUS campaign against the R-opponent. Despite all this, and despite the golden opportunity to actually bring about a desperately needed change and break from the Duopoly WHOSE STENCH REEKS TO HIGH HEAVENS, the corporate system did everything to vanquish his noble efforts. THIS IS BEYOND FORGIVING, BEYOND EVER TO BE FORGOTTEN.

I shall never give in to the safety of compromise, and any number of meaningless platitudes aimed at self-consolation. To dream and work for a better world--there cannot ever be any compromise. My culture, my background have taught me in very resounding terms these truths about purpose and commitment, regardless of profits or losses. BTW--neither KH nor JB had anything to say about Sen. Sanders. Hence, in the end, for me THERE WAS NO JOY IN MUDVILLE, to borrow an American expression. Though it did not surprise me, it definitely demonstrated their efforts at "political correctness"--mentioning the "Socialist" (even though that label does not fit Sen. Sanders, who, despite being head and shoulders higher and nobler than this sheeple herd, does not rise up to that all-embracing concept of plurality and inclusiveness) in a speech before adoring Duopoly crowds could be rather inconvenient.

So many have already observed (and yet conveniently not carried the analysis far enough) how this SHOULD HAVE BEEN A LANDSLIDE, YET WAS NOT. The reason should be eminently transparent--the insider hacks had picked someone who was unimaginably below the threshold of someone with exciting ideas and promises of fundamental changes. And so you get what you paid for. That they still eked out a victory, again, is primarily because Bernie Sanders, the one spurned, and cheated, TWICE, was gracious enough to let them have their time in the limelight, enabling whatever notable turnout which happened despite the pathetic DNC selection.

I OFFER MY PERSONAL GRATITUDE AND THANKS TO SENATOR SANDERS, and sign off here with the hope that only the progressive young ones (who, despite the Duopoly backers, have already made their mark upon this country's pathetic imperial system)--AOC, Ilhan, Rashida and the rest of (now further expanded) the Squad change this rotting 2-party stranglehold soon. I am fairly certain that will not happen in my lifetime--but for the sake of humanity faced with utter catastrophe, I would hope so for my children and the ones that follow.

STAY IN THE KNOW
If you've enjoyed this, sign up for our daily or weekly newsletter to get lots of great progressive content.
Series: "Socio-Political"