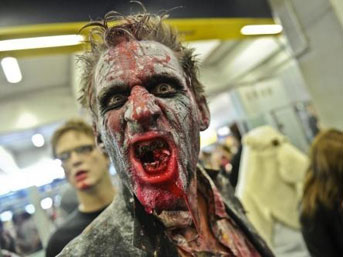 Copyrighted Image? DMCA
r /> Here's a sentence I never figured on writing: I agree with George W. Bush. He may well be, as he fears, the last Republican President. After a primary season historical in its tumult, easily the most chaotic convention since 1968, and a smarmy conman, light on specifics and posing as a strong man who can single-handily solve all our problems, as its standard bearer, a real danger exists now that the Republican Party will become a zombie party, the party of the living dead -- too weak to win the presidency but strong enough at the state level and in the House to prevent Democrats from doing anything significant for at least the next four years and perhaps longer.

Out of the past 7 presidential elections, the Republican Party has only won the popular vote twice, in 1988 and 2004. For Donald J. Trump to win in 2016 so many things have to break right for him I'm doubtful he can pull it off.

Today, Nate Silver's 538 blog gives Trump a 39.7% chance of winning. However, we're only a terrorist attack, a mass shooting, another police assassination, and/or another Clinton scandal away from a change in that trajectory. And how likely are one or more of the above to happen? The way this year has gone, I'd say, pretty likely.

So Trump certainly could win. No reason exists for Democrats to be complacent. Hillary Clinton's present standing in the polls is roughly the same as John Kerry's in 2004, and we all remember President Kerry's moving inaugural speech after he took the oath of office on January 20, 2005, don't we?

But even if Clinton wins, the dysfunctional Republican Party, the party of the living dead that cannot win a presidential contest, will still have more than enough power to prevent a President Clinton or any Democrat in almost every state from doing any of the people's business till at least 2020 and perhaps beyond.

How did we get into such a fine mess? After the shellacking Republicans took in 2008, when Democrats picked up 21 seats in the House and 8 in the Senate, the Republicans didn't give up. They got even.

As recounted in Salon editor David Daley's Ratf**ked: The True Story Behind the Secret Plan to Steal America's Democracy , soon after its 2008 defeat Republican strategist Chris Jankowski had an epiphany when he noticed a simple fact. The next election in 2010 ended in a zero.

In other words, 2010 would not be just any election. If Republicans won at the state level, they would be in charge of redistricting. As Karl Rove said, "He who controls redistricting can control Congress." If the Republicans could pull it off, they'd be the masters of their own fate.

Republicans could gerrymander U.S. House congressional districts and state congressional districts to favor their party. Financed by dark money by far right-wing billionaires wanting lower taxes and no regulations and using a fraction of the money it costs to run a national campaign, Jankowski and his allies were able to make amazing gains in the midterm elections in 2010. It was a tsunami, "the biggest midterm swing since 1938." Republicans gained 63 seats in the U.S. House, and, more importantly, won an astounding 680 new seats in state legislatures across the country.

With those victories and the help of a little computer program called Maptitude, Republicans were able to redraw districts in such a way as to give themselves overwhelming majorities even in blue states where they lost the popular vote, like Pennsylvania and Ohio. In fact, the congressional districts were drawn in such a way as to potentially protect Republican incumbents, even in the case of a Democratic landslide in a presidential election.

So even if Clinton wins and, perhaps, wins big, the House will still, more than likely, remain in Republican control. And not just Republican control, control by Republicans whose main reelection worries will be solely from their right-wing flank. All because of redistricting, they will have no reason to compromise and every reason not to.

The Republican Party post-Trump could well be a party in chaos, nostalgic for an imagined past, veering between white populist nationalism and big business libertarianism -- yet still powerful enough and with plenty of what ex-Senator Phil Gramm called "the most reliable friend you can have in American politics . . . ready money " to block anything Democrats want to get done.

Then, of course, next will come the midterms of 2018, when a proportionately older and whiter electorate -- who will have been steeping in anti-Hillary messages -- will show up at the polls angry and voting Republican. It's not difficult to see that Republican gains in 2018 could be substantial.

As Americans we face any number of incredible challenges that need to be addressed -- a decaying infrastructure, among the worst inequality of any Western democracy, the shrinking of the middle class, the hollowing out of our industrial base, a political system too controlled by wealthy and secretive special interests -- to name only a few. Chances are that none of these problems, as great and as important as they are, will be solved, even if Hillary wins big. So beware, Beware the Coming Republican Zombie Apocalypse!

I blog at "Left-Wing Tex" from beautiful Fort Worth, Texas. Here I am a retired English-as-a-Second Language teacher. I have had poems published in a number of venues, including California Quarterly, Borderlands, The Texas (more...)

Related Topic(s): Election; Infrastructure; Republican GOP Dirty Tricks; Republican Voter Suppression; Zombie Apocalypse, Add Tags
Add to My Group(s)
Go To Commenting
The views expressed herein are the sole responsibility of the author and do not necessarily reflect those of this website or its editors.

Believe it or Not, Trump is Not Our Main Problem

Dating in Your Sixties or Beware of Crazy Greek Psychotherapists!

The G(OP)rinch that Stole Democracy

2020: Welcome to Dystopian America: Like Us, But Only Worse