Privately, CEOs are gushing about the possibility of replacing their workforces with robots. 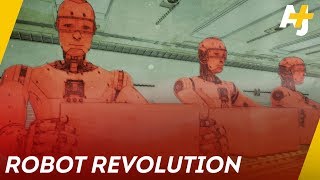 Robots And AI: The Future Is Automated And Every Job Is At Risk
(Image by YouTube, Channel: AJ+)   Details   DMCA

Corporate bosses don't talk about it in public, but among themselves psssst they whisper excitedly about implementing a transformative "AI agenda" across our economy.

AI stands for artificial intelligence, the rapidly advancing digital technology of creating thinking robots that program themselves, act on their own, and even reproduce themselves. These automatons are coming soon to a workplace near you.

Not wanting to stir a preemptive rebellion by human workers, corporate chieftains avoid terms like automation of jobs, instead substituting euphemisms like "digital transformation" of work.

Privately, however, top executives see AI as their path to windfall profits and personal enrichment by replacing whole swaths of their workforce with an automated army of cheap machines that don't demand raises, take time off, or form unions.

As tech exec Kai-Fu Lee confided to the New York Times, he expects AI to "eliminate 40 percent of the world's jobs within 15 years."

Some CEOs are so giddy about AI's profiteering potential that they openly admit their intentions.

Take Foxconn, the Taiwanese electronics giant hailed as a job creating savior last year by Donald Trump. It was given $3 billion in public subsidies to open a huge manufacturing plant in Wisconsin, but it's now reneging and declaring that it intends to replace 80 percent of its global workforce with robots within 10 years.

Corporate apologists say displaced humans can be "reskilled" to do something else. But what? Where? When? No response.

Executives try to skate by the human toll by saying that the machine takeover is the inevitable march of technological progress. Hogwash! There's nothing "natural" about the AI agenda it's a choice being made by an elite group of corporate and political powers trying to impose their selfish interests over us.

Related Topic(s): Jobs; Robots; Technology, Add Tags
Add to My Group(s)
Go To Commenting
The views expressed herein are the sole responsibility of the author and do not necessarily reflect those of this website or its editors.