Bernie has a huge and eternally healthy heart, filled with the lifeblood of empathy and dedication. In essence, that's what the 2020 Sanders campaign is all about. Not him. Us. 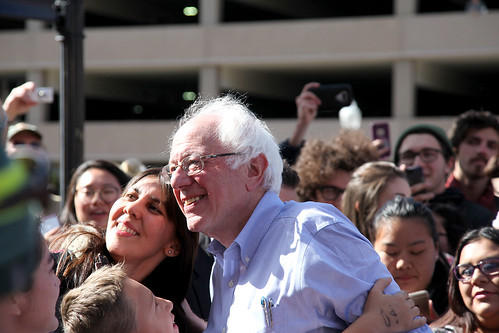 Along with being where all blood goes, the heart is an enduring metaphor. As Bernie Sanders recovers from a heart attack, now might be a good time to consider some literal and symbolic meanings.

Bernie immediately used his heart trouble to advance a central mission. From the hospital, he tweeted: "I'm fortunate to have good healthcare and great doctors and nurses helping me to recover. None of us know when a medical emergency might affect us. And no one should fear going bankrupt if it occurs. Medicare for All!"

That's the kind of being "on message" we so badly need. It's fully consistent with Bernie's campaign and his public life. ("Not me. Us.") He has never been a glad-hander or much of a showman. He's always been much more interested in ending people's pain than proclaiming that he feels it.

About 10 years ago, I was lucky enough to dialogue with Bernie during an "in conversation with" event in San Francisco, where several hundred people filled the room. Before we went on stage, there was a gathering in a makeshift green room that raised a small amount of money for his senatorial campaign coffers. "I've never been good at raising money," he told me.

I thought about that comment when the news broke a few days ago that the Bernie 2020 campaign raised a whopping $25.3 million during the last quarter, with donations averaging just $18. Bernie never went after money. It went after him; from the grassroots.

From the middle of this decade onward, as the popularity of Bernie and his political agenda has grown, so has the hostility from corporate media. The actual Bernie campaign is in sharp contrast with cable TV coverage as well as press narratives.

The campaign looks set to fully resume soon. When Bernie left the hospital on Friday, NBC News quoted the chief of cardiology at the UC San Diego School of Medicine, Ehtisham Mahmud, who said that the three-day length of hospitalization indicates the senator "probably had a small heart attack" -- and "they require really a very short recovery time."

So, from all indications, Bernie will soon be back on the campaign trail -- once again hammering on grim realities that are evaded or excused by the political and media establishment, like the fact that just three individuals (Jeff Bezos, Warren Buffett, and Bill Gates) have as much wealth as the bottom half of the entire U.S. population.

Last month, in an interview about his proposal to greatly increase taxes on the extremely rich, Bernie said: "What we are trying to do is demand and implement a policy which significantly reduces income and wealth inequality in America by telling the wealthiest families in this country they cannot have so much wealth." Such concentrations of wealth -- and the political power that goes with it -- are antithetical to genuine democracy.

For his entire adult life, Bernie Sanders has been part of social movements intent on challenging such profit-mad industries as corporate healthcare, financial services, mass incarceration, and the military-industrial complex that cause so much opulence for the few and so much suffering for the many. The enormous inequalities of wealth and power are systemic and ruthless -- with devastating effects on vast numbers of people.

That's where the heart as metaphor is apt. Bernie has a huge and eternally healthy heart, filled with the lifeblood of empathy and dedication. In essence, that's what the Bernie 2020 campaign is all about. As he has been the first to say, it's not about him, it's about us. How much compassion and commitment can we find in our hearts?

Related Topic(s): Bernie Sanders 2020 Presidential Candidate; Healthcare; Heart Failure, Add Tags
Add to My Group(s)
Go To Commenting
The views expressed herein are the sole responsibility of the author and do not necessarily reflect those of this website or its editors.