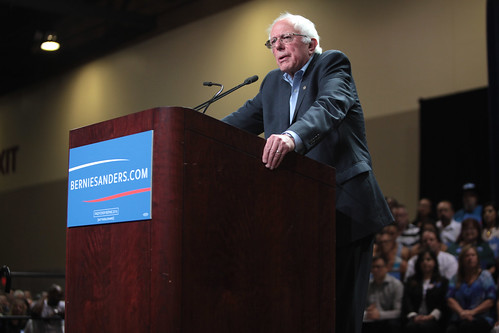 Bernie Sanders
(Image by Gage Skidmore)   Details   DMCA
"https://whotv.com/2019/06/27/iowans-extensive-student-debt-would-be-eliminated-by-bernie-sanders-plan/">Bottom line is we should not be punishing people for getting a higher education. It is time to hit the reset button." - Bernie Sanders

Americans currently have about $1.6 Trillion in outstanding student loan debt. This has crushing consequences for our economy as some debtors struggle to pay off these loans in a job market where income growth barely keeps up with inflation. Unlike Trump's businesses that were able to take advantage of bankruptcy six times, those with student loan debt cannot have their loans discharged. They tried to finance the American Dream and are now stuck in a nightmare that they cannot escape.

Bernie Sanders has become the latest Democratic presidential candidate to propose a plan to help those who are struggling with their student loan debt. Unfortunately, this plan overshoots the target by eliminating all debt. The relief is not subject to an income test so that everyone will be helped, regardless of need. It also makes no differentiation between debt incurred at a community college or at an overpriced private university. Without narrowing the focus, this plan is the financial equivalent of using a sledgehammer to swat a fly.

The other flaw in the plan is that it does not take into account those who made sacrifices to avoid the debt in the first place. Parents who cashed in their retirement funds to pay for their children's education will be left behind. So will students who worked while attending classes at the same time and others who put off milestones like starting a family so that they could concentrate on paying off their debt. Income inequality will be expanded as Americans who had to skip college due to financial considerations will still not have a degree while some of their contemporaries will now gain an even larger financial advantage over them.

Americans struggling with student debt deserve relief, but one that is targeted. Like healthcare, education, and prisons, private companies should not be profiting off of people trying to better themselves with a college degree. However, instead of simply forgiving this debt in full, Sanders should change his plan so that the government assumes control of the loans and eliminates interest payments on balances equal to the cost of an education at a public college or university. Payment terms should be adjusted according to the income of the debtor and programs put in place so that graduates could use their skills to work off their debt. The rules that keep these loans from being discharged in bankruptcy court should also be eliminated.

Student debt is a major problem that has been ignored for far too long by politicians in both major parties. Sanders and other candidates should be commended for finally addressing the problem but they should not overcompensate for past failures. A fly-swatting solution would be a far better solution.

Related Topic(s): Student Loans, Add Tags
Add to My Group(s)
Go To Commenting
The views expressed herein are the sole responsibility of the author and do not necessarily reflect those of this website or its editors.