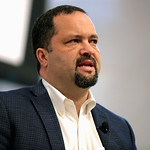 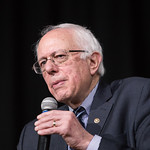 Even as the progressive list of everything wrong in our society that the 99 percent suffers at the hands of the one percent was enumerated at least three times, the mood at the Civic Center was upbeat today in Silver Spring, Maryland. Sen. Bernie Sanders was coming to speak, to introduce and endorse Maryland progressive gubernatorial candidate Ben Jealous, the popular former national president of the NAACP.

To add to the excitement of the 277 or so mostly white youngsters who crowded the auditorium, former state senator Nina Turner (D-OH) added her contagiously enthusiastic support of Jealous, even as she had supported Sanders and campaigned for him when he ran for president in 2016.

She aroused the crowd by quoting Nelson Mandela, "It always seems impossible, then it is done," to surround her enumeration of what needs changing in our ailing society: raise the minimum wage to $15 an hour, eliminate bankruptcy caused by medical expenses by bringing in Medicare for all, be sure candidates keep their promises as servants of the people who answer to THEM rather than the reverse.

One of the founders of Our Revolution Maryland, Keanu Smith Brown, spoke briefly, again enumerate what we need to fix, so many basic components of our world: no more massive incarceration or college tuition; no more tax loopholes for the rich but a minimum wage of $15 for all suffering below it now; strong rights to unionize; single payer healthcare; environmental sustainability; divestment from the use of fossil fuels; and protection of every Marylander.

The crowd cheered ecstatically when Sen. Sanders next took the podium, beaming with enthusiasm and unsinkable idealism and determination. He immediately lauded candidate Jealous for all he plans to do--not just campaigning on it but certainly to carry it out. Trump plans to deprive 23,000,000 Americans of health insurance; to cut education, housing, after-school and nutrition programs, handing over the $3 trillion thus freed up to the one percent in tax breaks.

Unlike Trump, Jealous will surround himself with people from all walks in life.

"Moms are in pain"; they can't afford childcare with their incomes of $10-$11 per hour, half of which goes to paying the rent; there is, in addition, opioid addiction [the highest amount in the country in VA, btw, I read].

"Ben has a different vision," said Sanders. We are the richest country in the history of the world. When we stand together, we can do everything. We can raise the minimum wage to $15 per hour. Understand that in 2017 women still earn 80 cents per hour less than men, amounting to $40 per week

We must rebuild the infrastructure, which will create jobs and realize that healthcare is a right, as FDR asserted long ago. Ben will seek Medicare for all. We need the best-educated workforce in the world instead of students who can't afford higher education or are in lifelong debt for having obtained it. The United States has more of its population in prison than any other country in the world. Our criminal justice system is broken, badly in need of repair.

We can take all the money spent on prisons and imprisonment and use it instead for jobs and education. We must eliminate the conviction that climate change is a hoax. Ben will work for energy efficiency and sustainability. He can't win without grassroots support. We must all get out there and reach the people most affected and wounded by the system. Big money is defeated only when all the people fight back!!

Rousing cheers followed Sanders offstage and Jealous as the next speaker.

"Here we go," he said and then stood silent for a few seconds. You could hear a pin drop. "We are on Trump's doorstep to get rid of his doormat."

Kids must realize their full potential. We can pass solutions as big as the problems that we face.

Jealous listed three major triumphs he achieved as head of the NAACP: leading the drive to eliminate capital punishment; co-chairing the drive to pass the Dream Act; and supporting marriage equality.