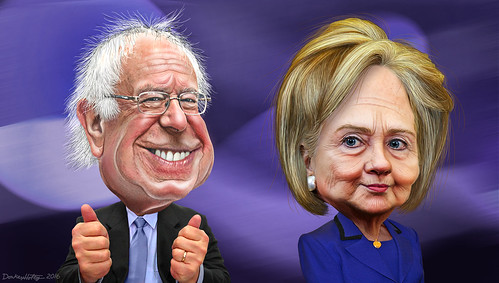 The other shoe finally dropped on Tuesday when Bernie Sanders formally endorsed Hillary Clinton for the Democratic party nomination. It was the culmination of a stunning betrayal by a man who inspired millions and provided a glimmer of hope that change was still possible through what should be clear to all by now is a thoroughly corrupted political system that cannot be saved.

The signs had been evident for weeks after the battered but cagey Vermont socialist was repeatedly thwarted by a rotten Democratic party establishment ruled over by Hillary toady Debbie Wasserman Schultz at the DNC. The South Florida shrew and payday loan industry prostitute ran the operation as though it was a de-facto arm of the Clinton campaign which in essence it was. Now the calls have begun to "unify" the party and the knives will be out for any recalcitrant Sanders supporters.

The party hacks and Hillary's army of loyalists and paid cyber trolls will enforce a ruthless crackdown on liberals and progressives who will be bullied, shamed and ostracized if they don't fall in line behind the queen. The rallying cry will be that it will take an entire village -- and then some -- to fend off the evil Donald Trump aka the latest version of the "new Hitler" and Hillary will be leading the charge to keep the country safe for Wall Street and corporate plunderers. Ironically, Trump has actually become the peace candidate this time due to his expressed disdain for NATO and the coming war on Russia that Hillary champions and could end up with all of us being dead.

In her ongoing attempts to round up dissenters, she will be dragging along poor, pathetic old Bernie who had been tabbed by Chris Hedges as a "chastened sheepdog" who would be needed to "coax his followers back into the holding pen", but is in actuality more of a lapdog for Hillary. There has been no more stinging of a betrayal in modern American politics than what Sanders just did to those who believed in him and were rewarded with a lesson in how the system truly works.

I received considerable criticism for a comment that I posted on this very website back in March where I predicted that:

Bernie Sanders has always had about as much real chance as Deion Sanders at winning the Dem nomination. Hedges is dead on with his piece in that Bernie will soon become the Judas goat with his inevitable appeal to supporters to get behind Queen Hillary. It is really going to sting to a lot of folks who naively believed in him despite the ugly truth that the system itself is beyond saving and who have lined up like dewy-eyed dopes behind the false prophet from Vermont. It may be a very bitter pill to swallow but once people are able to gag it down they will be better for it - trust me on that one.

While I do not gloat over being proven right I would challenge anyone who dares to argue with me now.

The Democratic party of 2016 has much in common with George Orwell's classic Animal Farm. In that immortal take on the perils of revolution the story is told using barnyard animals as the primary characters in what was a metaphor for the Russian revolution and the emergence of one of history's most barbaric and repressive regimes led by Joseph Stalin.

The aging pig Old Major gathers the barnyard denizens one night to deliver a vision of revolution freeing them from the cruelty of man -- in this case the drunken farmer who was their overlord -- and inspired an uprising that would lead to the animals taking over the farm. A new order was established led by the pigs Napoleon and Snowball. For a period there was great harmony, improved conditions for all animals and a set of seven commandments empowering the beasts in their quest to be free from their human masters.

However, the bliss was only temporary as friction between the cunning Napoleon and idealistic Snowball over leadership of the new order developed and festered and the seeds were sown for a betrayal. An effort was made by Mr. Jones to recapture control of his farm and a valiant defense was led by Snowball -- who was wounded in the process -- to repel the attack in what became known as the Battle of the Cowshed. The pig was held in great reverence for his heroism under fire but it was the high-water mark of the revolt.

While Snowball worked at improving conditions for the betterment of ALL animals, a retirement pasture, increased rations, sharing in the fruits of their labor and the construction of a windmill that would ease their burden his foe slyly prepared for his own counter-revolution.

One day, Napoleon made his move during one of the democratic sessions of the animals by unleashing upon Snowball the nine puppies that he had been 'educating' who had now grown into ferocious beasts and the benevolent pig barely escaped with his life. Napoleon then assumed control, protected by his canine police and aided by the duplicitous fellow pig Squealer who would serve as the disseminator of his propaganda among the flock.

Soon the barnyard animals' conditions began deteriorating under the new reign of the pigs who reinstated the harsh conditions of the pre-revolution days while themselves occupying the residence of the former human owner as though it were their castle. The whips of the oppressors were now in the hooves of the pigs and before long Napoleon began to conduct violent purges led by his savage dogs as well as to begin to subject the other animals to a reign of cruelty far worse than that of what they ever experienced under Mr. Jones. The pigs began taking on the characteristics of the humans -- who Napoleon had begun conducting business with - and soon even developed a taste for whiskey.

The tale reaches it's harrowing conclusion when the beloved aged workhorse Boxer who had blindly supported Napoleon injures himself and can no longer work. Looking forward to a retirement of leisure in his dwindling years, Boxer is instead sold by the pigs to the "knacker" who will slaughter him and boil his body down to make glue. The pigs used the proceeds from the sale to buy themselves more whiskey.

The point of the digression into Animal Farm is that while during the era that it was written it served as a rebuke of communism, it is easily translatable into modern terms with the Democratic party itself cast as the pigs. Mrs. Clinton could easily slip into the role of Napoleon, with Elizabeth Warren being a perfect fit for Squealer and poor old Bernie can be the doomed Boxer.