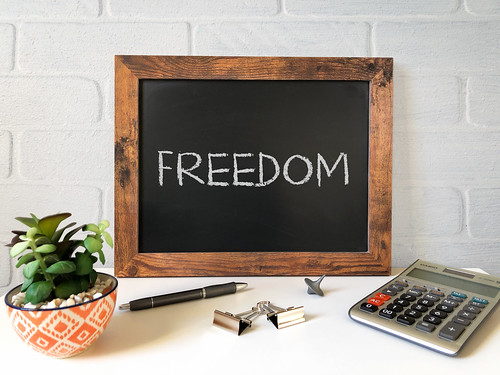 Being Clear About What #True American Freedom Means!

Ever since Rep.Alexandria Ocasio Cortez (D- NY) and her colleagues launched the Green New Deal resolution, the GOP has been betting they can scare the American electorate with new fears of evil government control. Their method is to shout some version of "Freedom or Socialism? That is the question for 2020!" But this GOP "freedom" ploy is deeply ironic. Their 2016 victory installed the most comprehensive federal control of American lives in recent memorya "hostile takeover" by interests dominated by the fossil fuel industry. Their intention was to destroy all federal rules against fossil fuel pollution and to block all efforts to create a clean energy economy. So far, at the federal level , they have succeeded completely. What's free about seeing to it that Americans are forced to breathe more toxic air and drink more polluted water? What's free about being exposed to worse and worse costly climate damage? This is a situation the Pentagon long ago defined as our most serious modern national security threat. The list of other American freedoms the "new" GOP, the #AltGOP, is targeting goes on and on. That's why I suggest we start talking about what #True American Freedom really means.

As most Americans understand our freedom, it's about our rights to life, liberty, and the pursuit of happiness. But the deeply corrupt #AltGOP now in control of the White House, Senate, and Supreme Court aims to violate these and our other basic constitutional rights. Their agenda includes attacking the right to free speech, both personal and in the media. They are challenging our freedom of religion, which should mean no attacks on other people's religion and no state religion. They are hoping to cut protections the Affordable Care Act provides against being refused life-saving care. As for freedom from fear, they consistently encourage unfair personal attacks on us by our highest officials and our neighbors on the basis of ethnic and gender identity. And they are doing everything they can to strip us of the right to vote too.

Of course the GOP wasn't always like this. Many landmark environmental rules and other socially beneficial measures were actually approved in the past by GOP Congress members and presidents. The old-style GOP had at least a discernible moral core, however imperfect. In Robert Reich's 2018 book, The Common Good, he lays out a capsule history of how, since the 1980's, the GOP and corporate America fell into the #AynRandTrap of radical, shortsighted selfishness. They have been systematically destroying American moral fiber from the top and ruthlessly preying on everyone else. As Reich shows, this form of national self-destruction has cost us trust in government, in each other, and trust in all the institutions and leaders of our society. A country this sick cannot last long without decaying into a Hobbesian war of all against all. This is in fact what President Trump is calling for if he is not reelected. Rwanda in Americaa prospect far worse than any of the horrors of our own Civil War.

Of course, the first stimulus for a return to sanity has already happened: the 2018 election. With any luck, the 2020 election will serve as even more of a corrective. Speaker Pelosi has spelled out what the 2020 Democratic platform must include: the same type of "kitchen table" issues that worked in 2018. But in the face of the #AltGOP's attempt to own the idea of American "freedom," it seems to me that we also have to spell out exactly what #True American Freedom means. And we must call out the ways the #AltGOP is trying to destroy what they claim to own. Part of that step is calling for a national moral revival that transforms the selfish, corrupt behavior of our business and political leaders. In her best-selling book , Daring Greatly , well-known Social Work Research Professor Brene' Brown has laid out specific, doable steps for sincerely and openly "bridging the gap" between our highest ideals and our everyday behavior. Her experience is that the process she has developed works.

But we ourselves also have to do a bit more to be clear about what #True American Freedom means. It's about how we talk. We must scrupulously avoid the specific language traps the GOP has set for us. I have long been warning our own people about these traps, which will unquestionably be high profile in the 2020 election fight. For years I have watched in horror as supposedly intelligent members of the Democratic Party, liberals of all kinds, and every type of progressive mindlessly repeat such GOP-launched or GOP friendly frames as "Obamacare," "carbon tax," "gun control," and the most senseless of all in my view, "single payer."

Let's start with "Obamacare." This is a word specifically created by the GOP to kill the Affordable Care Act. Never call the ACA "Obamacare. Since we're on the subject of healthcare, let's move on here to "single payer." To the average American, that is a meaningless phrase that suggests you are talking about "an unmarried payer." Then there's Medicare for All. While it's a lot better than "single payer," it is still, by itself, with no modifiers, very dangerous in the coming election. Lately there has been a rapid proliferation of different kinds of proposals, all labelled "Medicare for All. If there's one thing Americans desperately fear today a recent Kaiser poll found, it's losing the health insurance or healthcare they already have. Confusing people about what you mean by that phrase is a recipe for sure defeat at the polls. The cure? Come up with a simple add on to the phrase, like "Medicare for All+50," if your proposal is buy in after 50 years of age, or "Medicare for All: Buy-in," and so on. Think Americans will sit still to pore over the details of how the proposal you call "Medicare for All" will be set up? Think again: if you can't say it clearly in one breath, your idea is doomed and will destroy your candidate too.

Then there's "carbon tax." Never trust anyone arguing for a "carbon tax." Call the "carbon fee and citizen dividend idea" a "tax" and it will be DOA. Yes, I know it's a drop in the climate-fix bucket, but it could be a first wedge in the denial door. And while you are upgrading your language about this issue, be careful to say "climate damage," and "climate damage costs." People understand damage, and we all know money talks. Drop "climate change." It's a phrase that sounds way too mild these days. And now for one of my favorite peeves: calling for "gun control" when what we want is "gun safety" or "gun sense." Yes, I know folks are angry and want to control those guns. But "gun control" is the NRA's favorite frame, because they use it to scare even responsible gun owners into voting against the "gun safety" or "gun sense" they would otherwise favor, knowing as they do exactly what guns can do.
With new levels of self-awareness about the words we use, we Democrats, liberals and progressives can finally stop shooting ourselves in the foot.

Related Topic(s): America; Climate; Democratic; Election; Freedom; Gop; Guns; Health; Healthcare; Language; (more...) Liberals; Media; Medicare; Obamacare; Progressives; Religion; Rights, Add Tags  (less...)
Add to My Group(s)
Go To Commenting
The views expressed herein are the sole responsibility of the author and do not necessarily reflect those of this website or its editors.