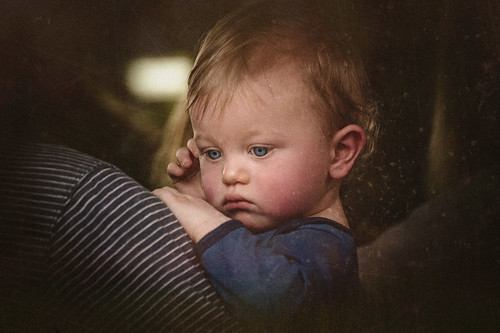 We often hear that boys need to be toughened up so as not to be sissies. Parent toughness toward babies is celebrated as "not spoiling the baby." Wrong! These ideas are based on a misunderstanding of how babies develop. Instead, babies rely on tender responsive care to grow well---with self-control, social skills and concern for others.

A review of empirical research just came out by Allan N. Schore. It is called "All our sons: The developmental neurobiology and neuroendocrinology of boys at risk."

The thorough review shows why we should be worried about how we are treating boys early in their lives. Here are a few highlights.

How are boys affected more than girls?

What can we conclude from the data?

Boys are more vulnerable to neuropsychiatric disorders that appear developmentally (girls more vulnerable to disorders that appear later). These include autism, early onset schizophrenia, ADHD, conduct disorders. These have been increasing in recent decades (interestingly, as more babies have been put into daycare settings, where nearly all provide inadequate care for babies).

Schore states, "in light of the male infant's slower brain maturation, the secure mother's attachment-regulating function as a sensitively responsive, interactive affect regulator of his immature right brain in the first year is essential to optimal male socioemotional development." (p. 14)

"In total, the preceding pages of this work suggest that differences between the sexes in brain wiring patterns that account for gender differences in social and emotional functions are established at the very beginning of life; that the developmental programming of these differences is more than genetically coded, but epigenetically shaped by the early social and physical environment; and that the adult male and female brains represent an adaptive complementarity for optimal human function." (p. 26)

What does inappropriate care look like in the first years of life?

"In marked contrast to this growth-facilitating attachment scenario, in a relational growth-inhibiting postnatal environment, less than optimal maternal sensitivity, responsiveness, and regulation are associated with insecure attachments. In the most detrimental growth-inhibiting relational context of maltreatment and attachment trauma (abuse and/or neglect), the primary caregiver of an insecure disorganized--disoriented infant induces traumatic states of enduring negative affect in the child (A.N. Schore, 2001b, 2003b). As a result, dysregulated allostatic processes produce excessive wear and tear on the developing brain, severe apoptotic parcellation of subcortical--cortical stress circuits, and long-term detrimental health consequences (McEwen & Gianaros, 2011). Relational trauma in early critical periods of brain development thus imprints a permanent physiological reactivity of the right brain, alters the corticolimbic connectivity into the HPA, and generates a susceptibility to later disorders of affect regulation expressed in a deficit in coping with future socioemotional stressors. Earlier, I described that slow-maturing male brains are particularly vulnerable to this most dysregulated attachment typology, which is expressed in severe deficits in social and emotional functions." (p. 13)

What does appropriate care look like in the brain?

"In an optimal developmental scenario, the evolutionary attachment mechanism, maturing during a period of right-brain growth, thus allows epigenetic factors in the social environment to impact genomic and hormonal mechanisms at both the subcortical and then cortical brain levels. By the end of the first year and into the second, higher centers in the right orbitofrontal and ventromedial cortices begin to forge mutual synaptic connections with the lower subcortical centers, including the arousal systems in the midbrain and brain stem and the HPA axis, thereby allowing for more complex strategies of affect regulation, especially during moments of interpersonal stress. That said, as I noted in 1994, the right orbitofrontal cortex, the attachment control system, functionally matures according to different timetables in females and males, and thus, differentiation and growth stabilizes earlier in females than in males (A.N. Schore, 1994). In either case, optimal attachment scenarios allow for the development of a right-lateralized system of efficient activation and feedback inhibition of the HPA axis and autonomic arousal, essential components for optimal coping abilities." (p. 13)

Darcia Narvaez is a Professor in the Department of Psychology at the University of Notre Dame. Her prior careers include professional musician, classroom music teacher, business owner, seminarian and middle school Spanish teacher. Dr. Narvaez’s current research explores how early life experience influences (more...)
Related Topic(s): Attachment; Boys; Brain, Add Tags
Add to My Group(s)
Go To Commenting
The views expressed herein are the sole responsibility of the author and do not necessarily reflect those of this website or its editors.

Self Actualization: Individualistic or Holistic Connection?

How Many Worldviews Are There? Is Only One Sustainable?

Getting Back to the Feeling of Oneness

Ecocentrism: What May Be Needed to Save Our Species