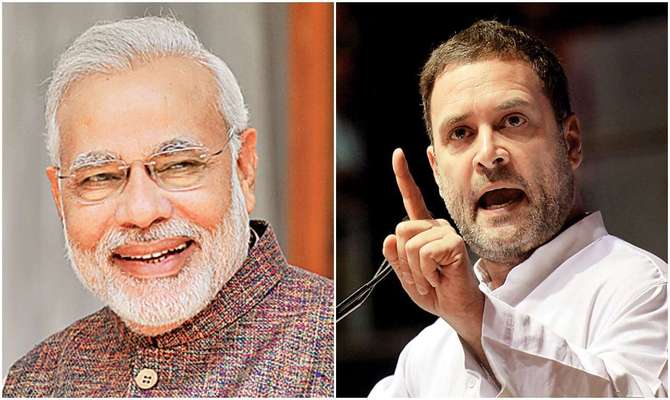 Modi without allies? Joke is on Congress
(Image by newsbred.com)   Details   DMCA

The polling dates of 2019 General Elections in India are out and the BJP is ready with its allies. The Congress? Well it's like a bride in a "swayamvar" (self-selection of groom) without any prospective bridegroom.

The SP-BSP alliance had long turned its back; Mamata Banerjee would've nothing to do with the rotting meat; and the prospective alliances with Sharad Pawar's NCP; Tejashwi Yadav's RJD, HD Kumaraswamy's JD (S) And Yechury-Vijayan's CPI (M) are still in the drawing board.

I chuckle when I remember the everyday headlines in our newspapers just a few weeks ago: Chandrababu Naidu had thundered: "The BJP is losing allies because of Narendra Modi's ego"; the eternal bridesmaid of Congress, Sachin Pilot, was lecturing NDA that the arrogance of the saffron party leaders was making its allies quit; Sashi Tharoor, who is giving a run to Imran Khan in tying wedding knots, viewed BJP as a sinking ship without allies; and our incorrigible corrupt media was legging this all up with its editorials, columns and front-page displays of BJP's impending doom. Lutyens Media moved heaven and earth on how Ram Vilas Paswan's Lok Janshakti Party (LJP), Uddhav Thackeray's Shiv Sena and Anupriya Patel of Apna Dal (S) were fed up with BJP's arrogance.

None of this has happened. Ram Vilas Paswan is firmly in clasp; Uddhav Thackeray is doing photo-ops with BJP president Amit Shah; and Apna Dal is going nowhere. Shiromani Akali Dal in Punjab and AIADMK in Tamil Nadu are bros too. If Narendra Modi's ego really existed, lesser lights like Jharkhand Students Union (AJSU), PMK, DMDK, Sikkim Krantikari Morcha and Suheldev Bharatiya Samaj Party wouldn't have been sought out and secured.

And look at the pattern of Congress with its allies. It ditched Chandrababu Naidu of TDP on the matter of Telengana; wooed him again before the elections in the newly-formed state last year and now both are keeping each other at arm's length after a serious drubbing in Telangana's assembly polls. Mayawati and Akhilesh Yadav were beside themselves when Congress, its poll-partner in Madhya Pradesh assembly elections, didn't entertain its MLAs in ministry (the genesis of BSP-SP turning its back on Congress in UP); and Kumaraswamy is reduced to tears in public all so often by the arrogant Congress in Karnataka. Mamata Banerjee made no secret of her disgust on Rahul Gandhi who spurned her offer on Tripura assembly elections. That our English mainstream media still doesn't find Congress arrogant is a joke without laughs.

The fact is, BJP leaves allies on principles and not because it seeks electoral gains. Our newspapers went to town when Assam Gana Parishad (AGP) left BJP on Citizenship Bill 2016 in Assam. They couldn't help speculating that Meghalaya's ruling party NPP would leave BJP after chief minister Conrad Sangma termed the Citizenship Bill as "unfortunate" and another ally UDP left. Much was made of souring of ties with Gorkha Janmukti Morcha in Darjeeling. Yet BJP has stuck to its unwavering belief in securing citizenship to fleeing Indian minorities from Pakistan, Bangladesh and Afghanistan. Modi's recent rallies in Assam underlined the groundswell of support among state's masses despite the propagandists in media. BJP leaving PDP in Jammu and Kashmir was on principle of national security and even-handedness.

Meanwhile, Arvind Kejriwal continues to beg Congress for alliance who is playing coy. AAP, despite 67 of 70 Delhi assembly seats, knows its fate is sealed. Or why would it go for a sinking ship? Did you say, Doobte ko Tinke Ka Sahara? (clutching at straws for survivalit doesn't help though).

Related Topic(s): Assembly; Citizenship; Congress; Gandhi; Media; Newspapers; Sikkim, Add Tags
Add to My Group(s)
Go To Commenting
The views expressed herein are the sole responsibility of the author and do not necessarily reflect those of this website or its editors.