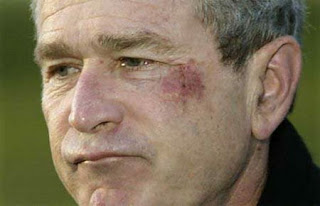 (Image by Unknown Owner)   Details   DMCA
Democrats might have been in a position to oppose Bush along a broad front. But 911 and targeted Anthrax attacks changed everything. Just as the FBI put a lid on Bush Sr's alleged involvement in a White House child prostitution ring circa 1990, the government itself most certainly denied the truth of 911 to the American people circa 2001. Suspicious deaths like these are far outside the normal distribution curves; suspicious deaths of establishment critics are statistically high. It is the picture of a world in which Democrats and liberals would be smart never to board a plane. The Anthrax attacks had the desired result: it shut up the Democratic opposition, most notably, Nancy Pelosi who had once called Bush a 'dangerous man'. Impeachment was off the table. One wonders what improbable series of GOP coincidences are required before Americans will --at last --conclude that something very, very rotten, evil and corrupt has been loosed in America. A short essay cannot possibly document every suspicious detail, every suspension of physics, logic, or common sense. Nevertheless, a broad outline paints a vivid picture. And every picture tells a story. The story can be summed up thus: the cancerous growth of something rotten in America, a growth that paces that of the rise of the GOP. 911 divided the world up according the GOP ideology --patriots vs terrorists. 911 was so convenient as to be unbelievable! I still don't believe the official story and less now than when the event was fresh. The official version is even more unbelievable now as more is known about how Bush personally ordered evidence destroyed and inquiries quashed with veiled threats of GOP-sponsored terror. Were key Democrats afraid of being involved in a mysterious but highly coincidental plane crash, a plane crash that defies the normal distribution curve, the very laws of statistics and probability? It's the only hypothesis that explains what it otherwise inexplicable! As many in government are overly eager now to put the Anthrax attacks behind them, it is clear that a genie may be out of the bottle. It's time to let it all hang out. It's time to conduct a real, open and accountable independent investigation into the suspicious, untimely deaths of Sen. Paul Wellstone, Mel Carnahan, and numerous others who --we are expected to believe --just happened to get on board an ill-fated plane just before a key vote could be cast, an incriminating fact revealed, or an investigation (911 specifically) begun! It is, of course, too late for this administration to retrieve any credibility. Because this administration is utterly without credibility on every issue from Iraq to Anthrax to 911, an investigation into the convenient death of Paul Wellstone must begin now! The late Senator's death was no surprise. Indeed, on May 25, 2001 VoxFux predicted that 'a Senator' would die in a aircraft accident.

Within months, one of a selected group of democratic Senators, likely from a state with a Republican Governor, will meet an untimely death. The death will appear to be either a plane "accident" or by "natural causes," - Whichever is most easily accomplished. The reality will in fact be that the Senator was one of a group of several Senators (Narrowed down into a group of "Selects") targeted for assassination and was the one who was in the right place at the right time for the most convenient and clean "hit." You will see, within in the coming months, for absolutely certainty, the untimely death of at least one Democratic Senator, to "re balance the scale". The private covert intelligence groups behind George Bush Sr. are extraordinarily well funded with petrochemical billions. They are deadly, work completely autonomously, in a terrorist formation identical to a terrorist organization, and are absolutely religiously dedicated to accomplishing their objectives. They will not rest until the Senate is under the control once again of the darkest force ever to seize control of the American Empire - The clandestine industrial / military / intelligence triad who is currently represented by George Bush Jr. --Democratic Senator to be Assassinated Soon, Assassination teams actively preparing hit

Wellstone opposed the Bush administration's 'War Resolution'. Is this motive for murder? That is best answered with another question: when it is clear that Saddam Hussein neither had WMD nor anything to do with 911, were the rich oil fields of Iraq motive for a war of aggression that has most certainly claimed over one million innocent lives?

If Wellstone's plane was sabotaged, it wouldn't be the first time that a political figure met his end in the friendly skies. A plane carrying Chinese leader Mao Tse-Tung's hand-picked successor, Lin Biao, crashed under mysterious circumstances en route to Moscow during 1971. The Chinese later claimed that Lin was defecting to the Soviet Union after a botched coup attempt against Mao; guilty or not, most historians believe that his plane was probably sabotaged. On March 3, 2001, a phosphorus bomb blew up a Thai Airways Boeing 737-400 minutes before the country's new prime minister, Thaksin Shinawatra, was set to board the jet. Many American politicians--mostly Democrats and liberal Republicans--have died in aviation disasters. Senator John Tower (R-TX) Senator John Heinz (D-PA), Congressman Mickey Leland (D-TX); Ron Brown and Mel Carnahan are among those who have been killed in airplanes since 1989. "Elected officials expose themselves every day to these kinds of risks as they travel across their states or districts," Speaker Dennis Hastert (R-IL) commented, noting the perils of frequently using small aircraft. Anyone who has traveled on what is euphemistically called "civil aviation" can tell horror stories about sudden drops, lurches and violent thunderstorms. But it's also true that security at the regional airports and small terminals at major airports used for such flights--Wellstone flew out of St. Paul--is more easily penetrable than that at JFK and LAX. It would hardly be impossible to sabotage a plane chartered for an inconvenient politician. Wherefore the Black Box? According to aviation consultant Robert Breiling, the plane that carried Senator Wellstone--the King Air A-100 "business turboprop," also known as a Beech King Air--is remarkably safe, with 25 percent fewer fatal accidents than other planes in its class. Warren Morningstar, spokesman for the Airline Owners and Pilots Association, says: "It's a great airplane." So why did Wellstone's go down? Weather is the lead suspect. Freezing temperatures, which can be severe in Minnesota, came early this year. "This airplane would typically be equipped with de-ice equipment but there are icing conditions that are beyond the measure of any equipment to remove," Morningstar notes. Local pilots, however, doubt that ice was a problem. "There was little ice. It was normal. We see it all the time," said Don Sipola, a flight instructor with 25 years experience. "Black boxes"--a flight data recorder and a cockpit voice recorder--are often crucial for discovering the cause of airplane crashes. According to Federal Aviation Administration spokesman Paul Takemoto, the plane was required to be equipped with both. Contradicting the FAA, Carol Carmody, acting chairwoman of the National Transportation Safety Board which is investigating the site of the crash, says that the plane apparently carried neither. Were the black boxes lost or were they never aboard? Someone may know, but thus far no one's saying.

Related Topic(s): Assassination; Child Abuse; Child Sex Trade; Cover-ups; Evil; Sex- Illegal-Prostitution; Terrorism Terrorist Profiling; Truth; White House Coverups; Whitehouse-Admin, Add Tags
Add to My Group(s)
Go To Commenting
The views expressed herein are the sole responsibility of the author and do not necessarily reflect those of this website or its editors.