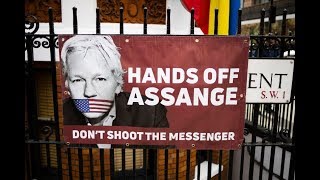 The WikiLeaks founder Julian Assange is so disliked in journalism and political circles that many reporters and liberal politicians were publicly cheering on Thursday when the Trump administration released an indictment of Assange, which was related to his interactions with the whistleblower Chelsea Manning in the months leading up to the publication of Pentagon and state department cables in 2010.

Please do not fall for this trap. It is exactly what the Trump administration is hoping for, as the Department of Justice (DoJ) moves forward with its next dangerous step in its war on journalism and press freedom.

The larger context surrounding this case is almost as important as the Assange indictment itself. Donald Trump has been furious with leakers and the news organizations that publish them ever since he took office. He complains about it constantly in his Twitter tirades. He has repeatedly directed the justice department to stop leaks, and he even asked former FBI director James Comey if he can put journalists in jail.

The justice department has responded by launching a record number of leak cases and have weighed changing the rules to make it easier to subpoena journalists.

But officials at the justice department aren't so stupid as to overtly act on the president's most controversial musings and immediately attempt to prosecute New York Times or Washington Post reporters. Give them more credit than that. If they were to do so, the public backlash would be so overwhelming that, even if their case did not fall apart before trial, a judge would almost certainly put an end to it.

Related Topic(s): Freedom Of The Press; Indictments; Journalism; Julian Assange; Manning; Trump Cruelty; Trump Illegality; Wikileaks, Add Tags
Add to My Group(s)
Go To Commenting
The views expressed herein are the sole responsibility of the author and do not necessarily reflect those of this website or its editors.