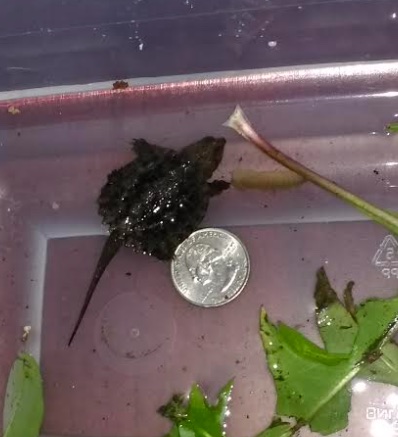 Maple Glen, PA This autumn has been a season of strange rescues for me.

First it was finding a tiny baby snapping turtle with a shell no bigger than a quarter on one of the bricks of the patio at the back of our house. Now such a thing would have been bizarre even in late spring, which is when such creatures typically hatch after having been laid in sand somewhere among a clutch of other turtle eggs by some hulking female snapper.

But how did such a small little thing get up the step from the sunken walkway and onto the patio? And more curious yet, where would it have hatched? There isn't a pond or river for miles from where our house is and surely it must have been the mother who made the trek to our property, as the little thing could never have covered more than perhaps 100 feet since hatching. And then there was the timing. Turtles mate in early spring after hibernating in the mud under water all winter, and then the female lays her eggs, the young hatchlings coming out when it's warm. By fall, before they in turn go down in the mud to hibernate for their first winter, their shells are a good two inches long.

I had to get instructions from an expert to know what to do. I was afraid to just bring it to a pond I knew of in a nature preserve where common snappers lived for fear this one was so young it might not make it through winter hibernation. It's a good thing I didn't do that too, but for a different reason: The expert I called at a local nature preserve assured me the baby turtle could survive the winter, but she also told me female snappers typically go up streams a bit away from the home pond to lay their eggs so her babies have a chance to grow a bit before they join the pond. Too small and they'd be eaten by larger turtles!

My next rescue happened a few days ago. I had just finished doing a re-re-roofing job on a one-story extension of our house and was walking over to a pile of discarded old shingles I needed to clean up when I noticed a slithering in the grass by my shoe. Looking down I spotted a tiny garter snake not more than five inches long and thinner than a pencil. It was the latest in the season I've ever seen a snake in these climes. I caught it easily, closed it between my two hands, and after it ceased wiggling, lifted the top hand to find it, as I expected, curled into a tight protective knot. Again, like the turtle, this little reptile had clearly been born way too late in the season. It should have been hying itself to a sheltered place before the frosts came"