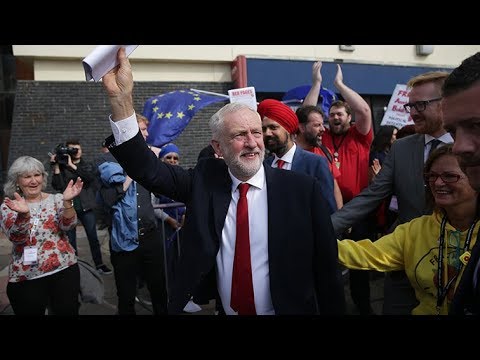 Over the past 18 months the British Labour party has been beset by a moral panic. According to pro-Israel activists in Labour, there has been a surge of anti-semitism in the party since Jeremy Corbyn became leader two years ago. Corbyn has broken with decades of party policy by placing a much stronger emphasis on the need to end Israel's oppression of the Palestinians.

As we will show, these activists' concerns are much less about anti-semitism than about Corbyn and the trend he represents. Pro-Israel groups, who have strong backing among the party establishment opposed to Corbyn, fear he is changing the nature of the British political discourse about Israel and the Palestinians. Beyond this, they are worried that should Corbyn, or someone else from his wing of the Labour party, reach power, they will put the Palestinians at the heart of a Labour government's foreign policy. Much is at stake.

A strange, if largely obscured feature of the supposed anti-semitism crisis -- set out at length in my f irst Mondoweiss article -- is that so many of those accused and convicted in Labour of this hate crime are Jews. The latest person accused by the party of anti-semitism -- and this week expelled -- is Moshe Machover, a mathematician and philosophy professor at the University of London. He was born and raised in Israel.

Machover appears to be among the first Labour members to be netted by a rule change on anti-semitism introduced at the party conference last week. Activists in a new group called Jewish Voice for Labour, launched at the conference, had warned that the change in wording would allow the party bureaucracy to expel members for "thought crimes."

As previously explained, the rule change was pushed hard by a powerful pressure group in Labour called the Jewish Labour Movement (JLM), which is the sister organization of Israel's own Labour party. The JLM helped create Labour Friends of Israel, which has traditionally been a key pro-Israel lobbying group among Labour members of parliament.

Both organizations have clandestine ties to the Israeli government through Israel's London embassy, as was revealed earlier this year by an Al Jazeera undercover investigation. It secretly filmed this collusion in action, as pro-Israel Labour activists plotted to subvert Corbyn's leadership, even at the cost of irreparably damaging the party.

Machover received a letter from Labour head office this week alleging that he had breached the party's anti-semitism rules with an article (PDF), paradoxically titled "Anti-Zionism does not equal anti-Semitism," in the newsletter of the Labour Party Marxists group.

In it, Machover pointed out the widespread opposition of most Jews to the ideas propagated by the Zionist movement before the rise of Hitler, and the problematic ideological affinites between Zionists and anti-semites. He wrote: "The founder of political Zionism, Theodor Herzl, had pointed out that anti-Semitic regimes would be allies, because they wanted to get rid of the Jews, while the Zionists wanted to rid them of the Jews. That was the common interest."

For this reason, observed Machover, quoting Zionist and Nazi leaders of the time, some Zionists welcomed the early policies of the Nazis, including even the notorious Nuremberg Laws of 1935. This was before the Nazis switched to a policy of extermination in the death camps. Both anti-semites and Zionists wanted Jews and non-Jews separated, and both rejected miscegenation. A similar argument, expressed more clumsily, led to the suspension of Ken Livingstone, a former London mayor, earlier this year.

It is notable that the Labour party accused Machover of anti-semitism on the grounds that his article was likely to "cause offence to Jewish people." It begged the question: which Jewish people?

That issue had, in fact, become a battleground at the conference. Jewish Labour party activists had set up a new group, Jewish Voice for Labour, to act as a countervailing force against the traditional dominance of the JLM in influencing the party's policies towards Israel and the Palestinians and against its accusations of anti-semitism by Corbyn supporters. Jewish Voice for Labour represents a broad range of Jews who have until now been marginalized in the Labour party, including trenchant critics of the occupation, anti-Zionists and supporters of BDS, the boycott movement. For the first time they have a collective voice within the party.

As Machover observed, pro-Israel groups are in trouble in Labour and elsewhere. "They are losing credibility on the arena of what could be called international opinion, but -- more importantly -- they are losing the Jewish public outside Israel, especially those under 30. There is a clear generational shift in opinion. These people are becoming very critical of Israel and its colonisation project."

The letter from Labour head office also accused Machover of violating the definition of anti-semitism produced last year by the International Holocaust Remembrance Alliance (IHRA), an inter-governmental body. The definition has been adopted by the Labour party, as well as by the British government.

Related Topic(s): Anti-semitism; Equality-Inequity; Israel; Labour Party; Occupation; Orwellian; Palestinian; Party Loyalty; Racism; Zionists, Add Tags
Add to My Group(s)
Go To Commenting
The views expressed herein are the sole responsibility of the author and do not necessarily reflect those of this website or its editors.