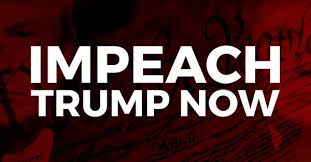 ARTICLE I. In his conduct while President of the United States,

In doing this, Donald J. Trump has undermined the integrity of his office, has brought disrepute on the Presidency, has betrayed his trust as President, and has acted in a manner subversive of the rule of law and justice, to the manifest injury of the people of the United States.

Wherefore, Donald J. Trump, by such conduct, warrants impeachment and trial, and removal from office and disqualification to hold and enjoy any office of honor, trust, or profit under the United States.

In his conduct while President of the United States, Donald J. Trump, in violation of his constitutional oath faithfully to execute the office of President of the United States and, to the best of his ability, preserve, protect, and defend the Constitution of the United States, and in violation of his constitutional duty to take care that the laws be faithfully executed, has prevented, obstructed, and impeded the administration of justice, and has to that end engaged personally, and through his subordinates and agents, in a course of conduct or scheme designed to delay, impede, cover up, and conceal the existence of evidence and testimony related to a Federal investigation involving his campaign and his own actions.

The means used to implement this course of conduct or scheme, as discovered by and delineated in Special Counsel's report, include the following acts:

(1) On or about June 14, 2017, Donald J. Trump did attempt to corruptly use the power of his office to induce the then FBI director, James Comey, to drop an active investigation of an administration official, Michael Flynn. According to a finding of fact, the Special Counsel reported that, in a private Oval Office meeting, Donald J. Trump asked of Comey;

(2) On or about May 9, 2017, after FBI Director Comey continued his investigation into Michael Flynn and Russia's alleged involvement with members of the Trump campaign, Donald J. Trump summarily fired James Comey. The motive for his firing, as pointed out in the Special Counsel's finding of facts, and Donald J.Trump's own public statements, was Comey's ongoing investigation into the Donald J. Trump and his campaign's alleged ties to Russia;

Stephen Pizzo has been published everywhere from The New York Times to Mother Jones magazine. His book, Inside Job: The Looting of America's Savings and Loans, was nominated for a Pulitzer.

Related Topic(s): Articles Of Impeachment; Donald Trump Criminal; Donald Trump Versus The Constitution; Investigation; President Trump; Trump Crime; Trump Impeachment, Add Tags
Add to My Group(s)
Go To Commenting
The views expressed herein are the sole responsibility of the author and do not necessarily reflect those of this website or its editors.

What's the Matter With Gaza?

Who You Callin' Un-American?