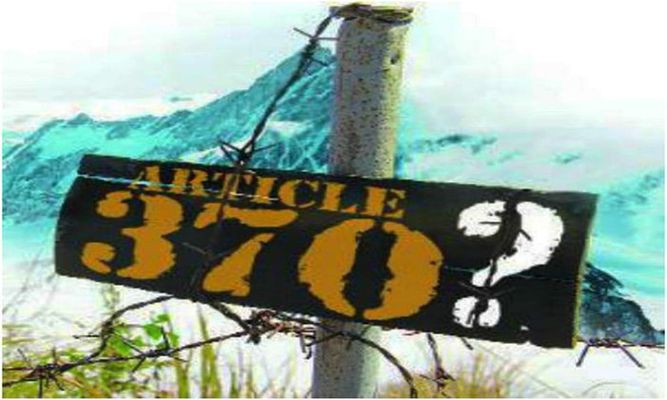 There is no reason why Article 370 of the Indian Constitution in favour of Jammu and Kashmir must not go.

Before we debate the legality/feasibility of abrogation of Article 370, it's important we bring home to readers its misuse, which neither seems to concern the centre nor to the pseudo-sickular gang who control the discourse in this country.

The J & K assembly lasts for six years. It has a separate text for oath. Its constitution doesn't have "secularism" or "socialism" words in its preamble. And don't you think that Prevention of Corruption Act (1988); Indian Penal Code, Domestic Violence Act, Religious Act of 1988, Protection of Wild Animals Act, Forest Rights or Urban Land Ceiling Acts apply to J & K. Central Bureau of Investigation (CBI) can't operate without the approval of the J & K government or the high Court. Supreme Court can only hear cases on appeal.

Further, People's Representation Act doesn't apply to the state. Jammu may have more population, more voters and a larger area but it's Kashmir that has more assembly seats: 47 to Jammu's 37. Mandal commission report has no mandate in the state. Reservations to SC/STs, provided only in 1991, still don't allow them representation in politics and the state assembly (Ever seen Mayawati agitated on the matter?).

Says Prashanth Vaidyaraj in Swarajyamag: Though 73rd (provision for Panchyat Raj, 1993) and 74th (provisions for local administrative bodies, 1993) Amendments in J &K have been made, the state government has refused to enact them into laws. So there is no democratic decentralization. The Panchayat elections are still held under its archaic 1989 laws. The J & K Right to Information (RTI) Act gives more power to the state government than provided for in the Central Act. (So there remains no accountability to special employment packages or prime minister's package regularly provided for.)

Freedom of press to cover legislative assembly proceedings doesn't work in J & K. The ministers' quota on education and employment may be 15% elsewhere in the country, in J & K its 30%.

And what do you think Article 370 does to Sikh or Hindu minorities? These minorities who migrated from West Pakistan in 1947 are not considered citizens of J & K under Article 6 of the state's Constitution as they came from outside the undivided J & K. Meanwhile those, who left Kashmir for Pakistan during the Partition, are welcomed back and could claim their properties or suitable compensation.

About 150 families from the Valmiki Samaj were brought in 1956 for cleaning works with the assurance they would be granted the status of state's subject. But it has come only in the case of "bhangis" (sweepers). Presently, their residential colonies remain un-regularized. Even the interlocutor's report of government of India is silent on the matter. Human-rights activists have no problem that the "Protection of Human Rights Act, 1993" is not applicable to J & K.

So what's this Article 370 which allows J & K to function much against the national (or for that matter, its own) interests?

When Pakistan sent its infiltrators to J & K in 1946-47 and illegally occupied parts of it, the matter went to United Nations (UN). But since the state's functions couldn't be postponed, Article 370 was temporarily introduced. It limited the power of the Parliament to make laws for J & K, but for defence, external affairs and communications. Noticeably, it doesn't make provisions for the state to have a separate Constitution.

In due course, Article 35A and Presidential Order of 1954 were added. In Article 35A, the state government of J & K has defined the term "permanent residents", which bars non-residents from purchasing land in J & K or access to public-sector jobs or welfare schemes. This article was illegally inserted in the Constitution by Pt. Jawaharlal Nehru, who made president Rajendra Prasad to amend the Constitution through his fiat instead of getting the Parliament's mandate. The presidential order for 1954 provides that no bill to increase or diminish the area of the state or altering its boundaries can be introduced in the Parliament without the consent of the state legislature.

Article 370 was only an additional legislative measure to facilitate the transition of J & K's accession to union of India. In 1950, the government of India clarified the effect of Article 370 in a white paper on Indian states. Importantly, the Constituent Assembly was to make a recommendation to the President to either abrogate Article 370 or "direct that it shall apply with such modifications and exceptions as he may specify".

Related Topic(s): Assembly; Ceasefire; Citizens; Legislative; Parliament; Secularism; Socialism; State, Add Tags
Add to My Group(s)
Go To Commenting
The views expressed herein are the sole responsibility of the author and do not necessarily reflect those of this website or its editors.