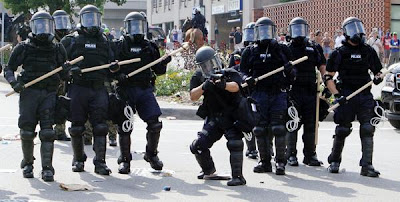 They're rounding up journalists now.

Covering breaking news has always been a Constitutionally protected activity in the United States. The Bush administration, however, seems intent on changing the rules -- or at least in seeing how far the government can push its police state mentality and get away with it.

You'd think the mainstream media would be all over a story like this. But so far, the biggest media outlets have been eerily silent. Dozens of journalists, photographers, bloggers and videomakers have been arrested in an orchestrated round up of independents covering the Republican National Convention. Journalists covering protests have been pointed out by authorities, blasted with tear gas and pepper spray, and brutalized while in custody. 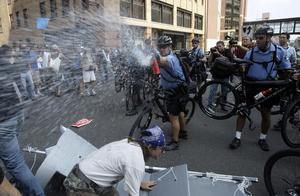 St. Paul Police use pepper spray on antiwar protesters at the Republican National Convention on Monday. One of those sprayed was AP photographer Matt Rourke, who took this shot. (Photo: AP | Matt Rourke)

Lest the mainstream media think this can't happen to them, and in what may be a tipping point, mainstream journalists such as photographer Matt Rourke of the Associated Press have found out that even they aren't immune to the brutal and indiscriminate tactics of the police in suppressing dissent. Rourke was doused with pepper spray, knocked down and arrested by St. Paul police. He was shooting photos of the protesters at a parking lot at 7th and Jackson streets, in downtown St. Paul, when police converged from three directions.

"We were encircled, and as I moved toward the officers in front of me in a passive manner, my legs were taken out from behind in an aggressive manner," Rourke said Tuesday after 12 hours in jail.

"When you hear about journalists getting arrested, it’s very disturbing," said Congressman Keith Ellison (D-Minn.) "I mean, the news gatherers—how can the people know, if they don’t have news gatherers to gather the news and show them? But when those folks are being intimidated and even roughed up, it’s pretty—it actually is a threat to democracy and the First Amendment."

On Monday and Tuesday, officers in riot gear fired rubber bullets, teargas, pepper spray and concussion grenades at protesters and journalists covering the story in St. Paul near the convention.

Fox News host Brian Kilmeade, predictably, expressed the opinion that the protesters should be arrested and left in jail. It's no surprise that Fox failed to distinguish between the great majority of peaceful, non-violent protesters and the actions of a few -- quite possibly government-planted agents provocateurs -- who broke storefront windows and engaged in other acts of vandalism. Kilmeade and his "fair and balanced" Fox colleagues ignored brutal police tactics and indiscriminate arrests directed against peaceful protesters and journalists.

Marcus Washington, a producer from Tennessee who was documenting the antiwar protest, grimaces in pain after he was hit with pepper spray. (Photo: Jim Gehrz / Minneapolis Star Tribune)

I'm a 49-year-old writer, editor, ex-musician, dreamer, reality catcher, ex-con, and father. I have three kids, six tattoos, a criminal record, a terminal disease, and an attitude. I was born in Alabama and spent the first 38 years of my life there (more...)
Related Topic(s): Antiwar; Bloggers; Bush Admin; Bush And Bush Admin; Bush Crimes; Bush Enemy Of Civil Liberties; Bush Enemy Of Democracy; Bush Enemy Of Human Rights; Bushite Planned Terroist Destruction Of Democratic; FISA; (more...) Freedoms; Journalism; Media; Minnesota; Police; Privacy; Privacy; Protest, Add Tags  (less...)
Add to My Group(s)
Go To Commenting
The views expressed herein are the sole responsibility of the author and do not necessarily reflect those of this website or its editors.