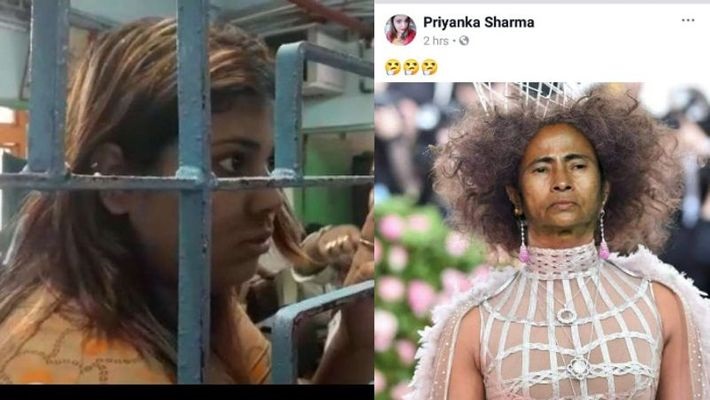 One option which you all must have missed and I would name now is that they all are SILENT on arrest of BJP's young leader Priyanka Sharma by the totalitarian government of Mamata Banerjee in West Bengal. Like they were silent when CBI officers were held as hostages; police officers under probe being shielded; violence in elections; opposition candidates unable to file their nomination papers; TMC goons forcing voters favourably in polling booths; arrests on mere chants of "Jai Shri Ram"; scuttling of Ayushman Bharat only because it's BJP's scheme; Refusing to pick up Modi's phone on Fani cyclone because she doesn't consider PM a PM; refusing to let BJP land helicopters for scheduled rally; preferring Ramzan over Durga Puja; custom officials harassed only because they found 2kg gold in the bags of wife of Mamata's nephew; number of alleged scams etc.

I cite these instances to show how fake are these forces and the ethical and moral cloak they use to hide their agenda. But at a more urgent level, this has probably encouraged Mamata Banerjee to go berserk. Look at the issue of Priyanka Sharma. She circulates a photo-shopped image of Mamata Banerjee, imposed over a latest picture of actress Priyanka Chopra. A complaint is filed and she is sent to 14-day judicial remedy. Mind you, Priyanka Sharma hasn't created the image, only shared it. Yet amongst thousands of such shares, she alone has been made to bear the brunt of suppression. The clear corollary is that she is made to suffer because of her political affiliation which Mamata can't stand.

Yet these forces are silent. Even as the hashtag #ISupportPriyankaSharma on twitter is building up a considerable steam. Twitteratis are so upset that they are changing profile picture with the one which has landed Priyanka Sharma in trouble. "Arrest me, if you must," is an assertion by many twitter-users under the above hashtag. Yet none of these forces are taking note. A BJP worker is jailed for sharing photo yet it's Modi who's a "Hitler."

Newspapers are wrongly defined as a bridge between people and the government. In Lutyens Media, people don't matter. Or only a certain kind matter. A Modi is hauled for uttering "Bhrashtachari No.1" while a Mamata Banerjee can get away literally with murder. Remember, she recently said she would put pebbles in soil and present it as rasogoolas so it breaks Modi's teeth? How did these forces react? Silence.

I remember an instance when RSS ideologue Prof. Rakesh Sinha had a non-bailable warrant issued against him by West Bengal police for posting a picture of his with his mother in Mahakal temple in Ujjain. The West Bengal police acted on the complaint of an individual who felt Sinha's "provocative" picture spoilt the communal harmony in the state! An aghast Sinha didn't know what hit him. "I haven't even visited West Bengal in the last two years," a baffled Prof. Sinha had said. Where was the outrage from these soldiers of "democracy"?

The sixth phase of 2019 General Elections would be over on Sunday. Election Commission, worried over history of violence in West Bengal during elections, spread the one in the state to all seven phases. Yet, even the cover of central armed forces haven't been much of a help. In each of the six phases so far, violence has happened; cases of rigging have been reported. Yet the names mentioned above haven't bat even an eyelid. Shekhar Gupta, head of Editors' Guild, instead is drooling over Mamata "fighting fire with fire, venom with venom." A Rajdeep Sardesai is gushing and asking Mamata Banerjee the secret of her energy. (Boost, of course, you terrible).

A real Mamata Banerjee is very different from the Mother Teresa-like sari she wears. Her autobiography conveys the image of a woman who likes to play the victim card. She is deeply insecure about losing control. She is also extremely star-struck. Just look at the number of MPs, MLAs and ministers who are stars and starlets in West Bengal. A whole lot of them were recruited in 2014 General Elections. Many more have been made candidates for the 2019 General Polls. Why, she even got a few from across the border to do her bidding.

This piece is just not about naming game. The most troubling is the intimidation which any Indian citizen in any state could be subjected to by the longest arm of law in West Bengal. Judiciary hasn't been much of a help. Nor the Centre who many believe should've imposed President's Rule in West Bengal seasons ago. Even Islamic State declaring they have an emir in West Bengal hasn't brought home the horrible truth that West Bengal could be a beehive of Islamic/Jihadists designs today.

West Bengal is slipping out of Union. All the ideals enshrined in our holy book, the Constitution, are being butchered today. The worry is, we are all being reduced to spectators. Some by design, some by helplessness. Time for a saviour. Maybe, May 23 could throw up light.

Related Topic(s): Actress; Arrest; Democratic; Elections; Feminism; Gandhi; History; Hitler; Law; Newspapers; (more...) Police; Secular; State; Violence, Add Tags  (less...)
Add to My Group(s)
Go To Commenting
The views expressed herein are the sole responsibility of the author and do not necessarily reflect those of this website or its editors.