U.S. Army Counterterrorism issued a report that said WikiLeaks is a threat to U.S. security, particularly in Afghanistan. The report says that the organization should be destroyed and offered a plan. Does the government really think it can destroy WikiLeaks or is the leaked report part of a plan to smear the organization so badly, it will lose supporters and money?

Since its launch three years ago, WikiLeaks has produced more scoops than the Washington Post has in the past thirty years according to a report by The Guardian. The web based service was "founded by Chinese dissidents, journalists, mathematicians and start-up company technologists, from the US, Taiwan, Europe, Australia and South Africa" according to their "About" page. WikiLeaks targets oppressive regimes throughout the world, as well as regimes seeking to repress information on illegal and unethical government actions and policies.

The organization pays a price for its activism. A study by the Army Counterintelligence Center concluded that WikiLeaks is a security risk to the United States. Their information "could be used " by FISS (foreign intelligence services), foreign terrorist organizations, and other potential adversaries for intelligence collection, planning, or targeting purposes." Further, the report concluded that the publications at the website, "could increase the risk to US forces and could potentially provide potential attackers with sufficient information to plan conventional or terrorist attacks in locations such as Iraq or Afghanistan" WikiLeaks.org - An Online Reference to Foreign Intelligence Services, Insurgents, or Terrorist Groups? WikiLeaks, March 15, p. 22).

Those extremely serious charges by Army resulted in a plan to destroy WikiLeaks:

"WikiLeaks.org uses trust as a center of gravity by assuring insiders, leakers, and whistleblowers who pass information to WikiLeaks.org personnel or who post information to the Web site that they will remain anonymous. The identification, exposure, or termination of employment of or legal actions against current or former insiders, leakers, or whistleblowers could damage or destroy this center of gravity and deter others from using WikiLeaks.org to make such information public." (Army Counterintelligence report, March 15, p. 3)

Ironically, the same report failed to reach a conclusion on the legality of WikiLeak's publishing activities.

Do they hate them for their freedoms?

WikiLeaks has more than a million documents on file, anonymous leaks from within various government organizations. It has published documents on Guanta'namo Bay torture methods and secret reports from Bildergerg Group meetings.

Recently, the organization posted a document that outlined the CIA's public relations plan to shore up European support for the war in Afghanistan. There are also major leaks posted on the Icelandic financial meltdown with more leaks on the involvement of Goldman Sachs, Deutsche Bank, Credit Suisse, and other major financial institutions in that banking scandal. 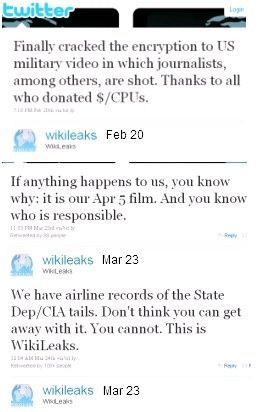 (Image by Unknown Owner)   Details   DMCA
The the top message refers to an attack in Afghanistan that killed civilians and reporters. Russian Television (4:24) provided an audio clip from General David Petraeus in which he said he'd show some videotape when questions were raised about civilian deaths in Afghanistan, the basis for the WikiLeaks tweet of February 20. No videotape has been shown.

WikiLeaks has a press conference scheduled in Washington, D.C. on April 5 to show the decrypted video.

On March 23, the middle and bottom messages were posted. The middle message is a reaction to claimed harassment by U.S. intelligence indicated in other recent tweets. The bottom message and this article reflect agitation at claimed surveillance by U.S. government agents following board member and frequent spokesman Julian Assange.

Assange speculates that the ongoing harassment is due to the planned video of civilian and press casualties, the release of the destroy- WikiLeaks Army study, or revelations of financial improprieties concerning Iceland's financial crisis.

The harassment of WikiLeaks staff is an emerging story on the internet. However, the reality and significance of the leaked video to be shown on April 5 may propel the organization to worldwide attention. If the tape is less than promised, the April 5 showing may deliver a blow to WikiLeaks that might just meet the goals of U.S. Army Counterintelligence outlined in the leaked report.

Related Topic(s): Censorship; Counterterrorism; United-States-Army; Wikileaks, Add Tags
Add to My Group(s)
Go To Commenting
The views expressed herein are the sole responsibility of the author and do not necessarily reflect those of this website or its editors.

STAY IN THE KNOW
If you've enjoyed this, sign up for our daily or weekly newsletter to get lots of great progressive content.
Series: "Survival - End Times"