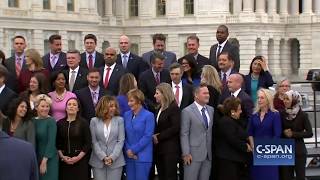 In November, about 25 progressive Democrats were newly elected to the House of Representatives. How do the citizen groups know whether they are for real or for rhetoric? I suggest this civic yard stick to measure the determination and effectiveness of these members of the House both inside the sprawling, secretive, repressive Congress and back home in their Districts. True progressives must:

1. Vigorously confront all the devious ways that Congressional bosses have developed to obstruct the orderly, open, accessible avenues for duly elected progressive candidates to be heard and to participate in Congressional deliberations from the subcommittees to the committees to the floor of the House. Otherwise, the constricting Congressional cocoon will quickly envelop and smother their collective energies and force them to get along by going along.

2. Organize themselves into an effective Caucus (unlike the anemic Progressive Caucus). They will need to constantly be in touch with each other and work to democratize Congress and substantially increase the quality and quantity of its legislative/oversight output.

3. Connect with the national citizen organizations that have backers all around the country and knowledgeable staff who can help shape policy and mobilize citizen support. This is crucial to backstopping the major initiatives these newbies say they want to advance. Incumbent progressives operate largely on their own and too rarely sponsor civic meetings on Capitol Hill to solicit ideas from civic groups. Incumbent progressives in both the House and the Senate do not like to be pressed beyond their comfort zone to issue public statements, to introduce tough bills or new bills, or to even conduct or demand public hearings.

4. Develop an empowerment agenda that shifts power from the few to the many -- from the plutocrats and corporatists to consumers, workers, patients, small taxpayers, voters, community groups, the wrongfully injured, shareholders, consumer cooperatives, and trade unions. Shift-of-power facilities and rights/remedies cost very little to enact because their implementation is in the direct hands of those empowered -- to organize, to advocate, to litigate, to negotiate, and to become self-reliant for food, shelter and services (Citizen Utility Boards provide an example of what can come from empowering citizens).

5. Encourage citizens back home to have their own town meetings, some of which the new lawmakers would attend. Imagine the benefits of using town meetings to jump-start an empowerment agenda and to promote long over-due advances such as a living wage, universal health care, corporate crime enforcement, accountable government writ large, renewable energy, and real tax reform.

6. Regularly publicize the horrendously cruel and wasteful Republican votes. This seems obvious but, amazingly, it isn't something Democratic leaders are inclined to do. Last June, I urged senior Democrats in the House to put out and publicize a list of the most anti-people, pro-Wall Street, and pro-war legislation that the Republicans, often without any hearings, rammed through the House. The senior Democrats never did this, even though the cruel GOP votes (against children, women, health, safety, access to justice, etc.) would be opposed by more than 3 out of 4 voters.

7. Disclose attempts by pro-corporate, anti-democratic, or anti-human rights and other corrosive lobbies that try to use campaign money or political pressure to advance the interests of the few to the detriment to the many. Doing this publically will deter lobbies from even trying to twist their arms.

8. Refuse PAC donations and keep building a base of small donations as Bernie Sanders did in 2016. This will relieve new members of receiving undue demands for reciprocity and unseemly attendance at corrupt PAC parties in Washington, DC.

9. Seek, whenever possible, to build left/right coalitions in Congress and back home that can become politically unstoppable.

10. Demand wider access to members of Congress by the citizenry. Too few citizen leaders are being allowed to testify before fewer Congressional hearings. Holding hearings is a key way to inform and galvanize public opinion. Citizen group participation in hearings led to saving millions of lives and preventing countless injuries. Authentic Congressional hearings lead to media coverage and help to mobilize the citizenry.

The sovereign power of the people has been excessively delegated to 535 members of Congress. The citizens need to inform and mobilize themselves and hold on to the reins of such sovereign power for a better society. Demanding that Congress uphold its constitutional obligations and not surrender its power to the war-prone, lawless Presidency will resonate with the people.

Related Topic(s): Congress; Policy; Progressives; Welfare, Add Tags
Add to My Group(s)
Go To Commenting
The views expressed herein are the sole responsibility of the author and do not necessarily reflect those of this website or its editors.