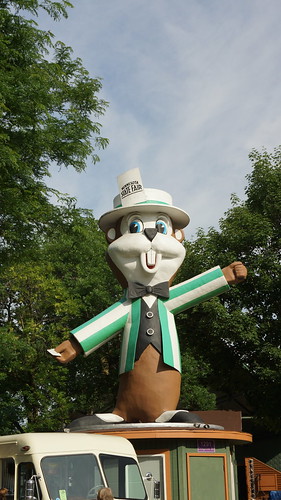 Each year Dispatches From The Edge gives awards to individuals, companies and governments that makes reading the news a daily adventure. Here are the awards for 2018:

The Golden Sprocket Wrench Award to Lockheed Martin, the world's largest arms manufacturer, for its F-22 Raptor Stealth fighter, a fifth-generation interceptor said to be the best in the world. That is when it works, which is not often. When Hurricane Michael swept through Florida this fall, 17 Raptors -- $339 million apiece -- were destroyed or badly damaged. How come the Air Force didn't fly those F-22s out of harm's way? Because the Raptor is a "hanger queen" that loves the machine shop. Less than 50 percent of the F-22 fleet is functional at any given moment. The planes couldn't fly, so they got trashed at a cost to taxpayers of around $5 billion.

Lockheed Martin also gets an Oak Leaf Cluster for its F-35 Lightning II fighter, at $1.5 trillion, the most expensive weapon system in U.S. history. Some 200 F-35s are not considered "combat capable," and may never be, because the Pentagon would rather buy new planes than fix the ones it has. That may cost taxpayers $40 billion.

The F-22s and F-35s also have problems with their oxygen systems, but no one can figure out why.

However, both planes did get into combat. According to Vice Admiral Scott Stearney, the F-35 achieved "tactical supremacy" over the Taliban (which doesn't have an air force). The F-22, the most sophisticated stealth fighter in the world, took on Afghan drug dealers.

As for Lockheed Martin, the company was just awarded an extra $7 billion for F-22 "sustainment."

The Golden Parenting Award to the U.S. State Department for trying to water down a resolution by the UN's World Health Assembly encouraging breast feeding over infant formula. A Lancet study found that universal breast-feeding would prevent 800,000 infant deaths a year, decrease ear infections by 50 percent and gastrointestinal disease by 64 percent. It lowers the risk for Type 1 diabetes, two kinds of leukemia, sudden infant death syndrome and asthma. It also makes for healthier mothers.

Conn M. Hallinan is a columnist for Foreign Policy In Focus, "A Think Tank Without Walls, and an independent journalist. He holds a PhD in Anthropology from the University of California, Berkeley. He oversaw the (more...)
Related Topic(s): 2018; Awards; Dispatches From The Edge; Government; Pentagon, Add Tags
Add to My Group(s)
Go To Commenting
The views expressed herein are the sole responsibility of the author and do not necessarily reflect those of this website or its editors.