Michael Parenti was quoted by The Greanville Post on the matter of Scalia, shortly after his death (from, at the time of writing, unknown causes. Since there may well never be an autopsy, we will likely never know for sure what the cause(s) were).

"Supreme Court Justice Scalia just died an hour or so ago. He will not be missed by everyone. Many of the wimpy Democrats are of course already hailing him as 'brilliant.' Brilliant, bullshit. He served the powerful corporations and the conniving plutocracy. He pretended to abide by his empty inflated "Originalist" constitutionalism. He battered the weak, stomped on the defenseless, and strutted around dwelling on his judicial contrivances. He died while hunting in West Texas. He died the way he lived, destroying the weak and the innocent." (Antonin Scalia: No R.I.P. for this piece of scum. See you in hell, Antonino.)

In the process, Scalia worked very hard to destroy the Constitution and (to the extent that it still exists) Constitutional Democracy in the United States, too. And it is Scalia's most at-the-margins concept of the Constitution that is the subject of the column.

Scalia claimed that he was an "originalist," that is that the Constitution should be interpreted by judges on the literal meaning of the text, as it was written in the 1780s, and that "modern" interpretations, updatings, and applications were not to be permitted. A full critique of Scalia's version of Constitutionalism would be very long, and indeed they have extended to book length.

But it is the fundamental contradiction of "Scalia Thought" that has always impressed me. Scalia claims that the Constitution is an absolutist document and that therefore there is only one way to interpret it (his, of course). But there is a fundamental problem with this approach: the Constitution itself is filled with ambiguity, and Scalia's approach to it is filled with inconsistencies and self-contradiction.

Take for example, the Preamble:

"We the people of the United States, in order to form a more perfect Union, establish justice, insure domestic tranquility, provide for the common defence, promote the general welfare, and secure the blessings of liberty to ourselves and our posterity, do ordain and establish this Constitution for the United States of America."

What could be more ambiguous than that? Except of course for the introductory phrase, "We the people of the United States." Scalia and his right-wing supporters have always interpreted that phrase to mean something like "We the people of the separate states, getting together on policy and program now and again, and then pulling back and going our separate ways whenever we are inclined to do so [otherwise known as the "Doctrine of States' Right] do declare that . . ." But as for the rest, one can say "surely open to interpretation, n'est-ce pas?"

And then in Article I, Section 8, we come to the famous interstate commerce clause: "To regulate commerce with foreign nations, and among the several States, and with the Indian tribes;" Many Republicans over time, and presumably Justice Scalia too, seem to have interpreted that power of Congress to cover only such things as trade carried out between the governments of the states.

Turning to the Bill of Rights, how about the Ninth, the one that Scalia's soul-mate Robert Bork, termed "an ink-blot on the Constitution:" "The enumeration in the Constitution, of certain rights, shall not be construed to deny or disparage others retained by the people." Pretty ambiguous, no? So ambiguous in fact that it could be used to guarantee the right to choose in matters of abortion and also the right to marry, within the other provisions of state law, whom one wants to, regardless of sex. How inconvenient for Scalia.

And then there is the 10th, "The powers not delegated to the United States by the Constitution, nor prohibited by it to the States, are reserved to the States respectively, or to the people." For the Rightists, this is the "States' Rights" amendment, except that once again it is quite ambiguous, beginning with, just how does one interpret the clause: "The powers not delegated to the United States by the Constitution?" Absolutist, unambiguous, hardly. On the other hand, there are certainly quite clear provisions of the Constitution, like the provision in Article Six that makes ratified treaties part of the "supreme law" of the land (and thus prohibits the use of torture). But the Right has never paid any attention to that one, and I don't know of any of the many speeches that Scalia made in which he said that they should because it is so unambiguous.

On the other hand, it just so happens that Scalia takes parts of the Constitution he doesn't like and interprets them in a way contrary to that of many (including, it would seem, "the framers" to whom he likes to make you think he is so devoted). Take the first clause of the First Amendment, "Congress shall make no law respecting an establishment of religion, or prohibiting the free exercise thereof;" It would seem that it guarantees the separation of church and state. However, Scalia saw it entirely differently when he talked about "God's Justice and Ours." Ooops!

As for the "equal protection" clause of the 14th amendment (for some reason, Scalia allows that amendments, although not part of the original text, should be "strictly interpreted"), well it just doesn't apply to people that Scalia doesn't like (or thinks are "sinful," oops, there's religion creeping into his thinking again). And then there is the "corporations are people" dictum (which does go back to the 1880s when a right-wing Court made that one up out of whole cloth), nowhere to be found in the Constitution. It is also nowhere to be found in any of Scalia's condemnations of how the Court carries out its business. In fact, he is a strong supporter of the "Corporations are people" doctrine.

But, I must say that there is one area in which I am entirely in agreement with Scalia: the whole matter of judicial review of the Constitutionality of actions of the legislative and executive branches. It is nowhere to be found in the Constitution. Then Chief Justice John Marshall made it up starting with his famous decision in Marbury v. Madison (followed up by a series of decisions that broadened the doctrine and its applications). In chapter 5 of my book The 15% Solution I had a fictional then-future Supreme Court led by a Chief Justice Steps (Scalia, get it?), hold that under the Doctrine of Originalism to which it had bound itself, those powers were nowhere to be found in the Constitution. It then overturned Marbury v. Madison and all the subsequent related decisions, thus removing the courts from carrying out the function of judicial review. If Scalia were consistent, that of course is a doctrine that he would have been espousing. But Scalia just loved undertaking judicial review, as when in Heller he reversed a history of Supreme Court decisions on the Second Amendment and just severed the "well-regulated militia" clause from it. 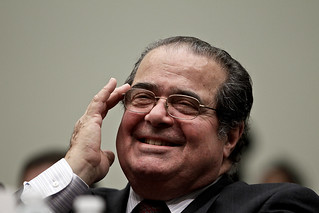 Don't bother us with minutiae.
(Image by SteveMasker)   Details   DMCA

And this review barely scratches the surface of the inconsistency of this most political justice in the service of his far right-wing politics. (If, as is rumored, along with his soul-mate Clarence Thomas, he is a member of the right-wing secret Catholic society, Opus Dei, that religious affiliation, to which members pledge first allegiance, would strongly influence his behavior on the Bench.)

And by the way, if you think that the Repubs. are going to give in on even considering the Obama nominee to fill the seat, you've got another think coming. Hopefully, Obama will make the rumored nomination of Loretta Lynch to the High Court. Whatever you think of Obama (and I am hardly a big fan of his), such a choice would be brilliant, starting with its political implications. But that is for another time.

In sum, the only thing Scalia was consistent with was his consistent pursuit of his far-right-wing goals. He was an "originalist" when it suited his politics; not one when it didn't. Or one can more kindly say, please do think of Scalia as an originalist -- that is except when he wasn't.

Steven Jonas, MD, MPH, MS is a Professor Emeritus of Preventive Medicine at StonyBrookMedicine (NY) and author/co-author/editor/co-editor of over 35 books. In addition to his position on OpEdNews as a "Trusted Author," he is a Senior Editor, (more...)
Related Topic(s): Constitutionalism; Corporations; Death; Judges; Politics; Supreme Court Justice Antonin Scalia, Add Tags
Add to My Group(s)
Go To Commenting
The views expressed herein are the sole responsibility of the author and do not necessarily reflect those of this website or its editors.