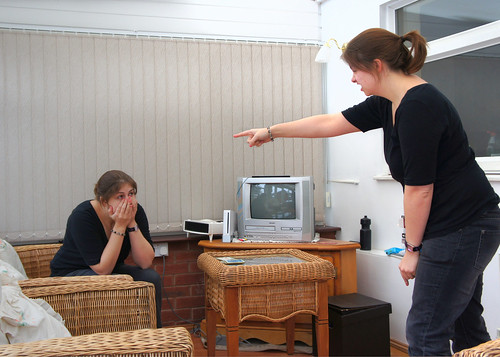 The essence of our inability to have civil political conversations in the United States today is that we are ideologically possessed. The effects of our possession range on a spectrum from simple suspicion of others to the total inability to think for ourselves.

Ideology gives any action justification and provides us with the necessary steadfastness and determination to press our agendas past the point of reasonableness. Although it may work against the best interests of others, it is what makes our acts seem justified in our own eyes. As an example, the ideology of free and unencumbered right to bear arms has contributed to the death of thousands of innocents.

As one can plainly see when viewing from a more objective stance, the price of ideological possession is regressive individual behavior. It shows up on our inability to see the consequences of our actions even when they negatively affect others.

From,"Alexander Solzhenitsyn in The Gulag Archipelago, ".... That was how the agents of the Inquisition fortified their wills: by invoking Christianity; the conquerors of foreign lands, by extolling the grandeur of their Motherland; the colonizers, by civilization; the Nazis, by race."

So, what might this have to do with you? Everything!

Everything and anything that you use to justify your actions other than your own values compromises your effectiveness. And ideological possession does exactly that.

I've known more that one person who is racist until they get to know someone of another race on a personal level. Or young men who live through the horrors of combat only to figure out that nationalism is an ideology that shaped their decision to join the "fight for freedoms" that are not really at risk.

At the level of personality theory, what we see is a public identity that hides the authentic self. This sets us up for seriously negative consequences when the ideology that possesses us runs smack into an instance when we need to express the authentic self to maintain the integrity of our character.

We see this with people who are rabidly homophobic and rail against any homosexual rights until a son or daughter comes out of the closet. Their authentic-self loves that child, but the public-self is possessed by the ideology and this sets up the internal conflict.

Related Topic(s): CHARACTER; Choice; Freedoms; Homophobic; Ideology; Integrity; Killing; Nationalism; Nazis; People; (more...) People; Race, Add Tags  (less...)
Add to My Group(s)
Go To Commenting
The views expressed herein are the sole responsibility of the author and do not necessarily reflect those of this website or its editors.