Joe Biden. Green New Deal. The words stare at each other across the page in slack-jawed disbelief. Or in stark, staring mutual incomprehension. To clueless fossil Uncle Joe, anyone mouthing the words "Green New Deal" (GND, for short) might as well be speaking Klingon. 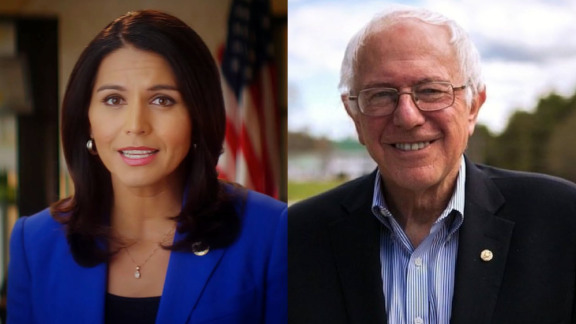 That's because Joe Biden literally comes from another political planet. Or more precisely, from a geologically distant, long-forgotten era of this one. While you can't walk two feet in Congress without tripping over DINOs (Democrats In Name Only), Clueless Joe is virtually the only Democrat--and certainly the only Democrat running for president--who adds to boringly common DINO status the unique distinction of being an ecological dinosaur. Perhaps the best way to capture Biden's unique combo of planet-deadly traits--Republican policies and a hopelessly outmoded, pre-climate-emergency worldview--is to spell this "DINOsaur."

In other words, Biden's largely a de facto Republican so out of touch with Democrats' current voter base and humanity's present ecological crises that he, unlike most Dem presidential hopefuls, won't even pay lip service to the GND. For unlike disingenuous fellow DINO Nancy Pelosi--who fully groks what the GND is and therefore works tirelessly to sabotage it--DINOsaur Joe lives on a defunct political planet where radical programs like the GND can't even be conceived and the resident doomed lizards are simply clueless as to why any fellow creatures (aware of that onrushing asteroid, these days a climate"asteroid") would clamor for them.

See, a candidate who can't even conceive of a program is certain not to enact it--especially a staggeringly ambitious program like the GND that will require unprecedented political heavily lifting. As the DINO least evolved to grasp the GND, Joe Biden is by far the DINO least likely--even under the most relentless popular pressure--to start enacting it. Uncle Joe is utterly clueless about America's urgent need for a GND, and savvier DINOs like Nancy Pelosi and Chuck Schumer--keenly aware of the GND but with GND-hostile priorities--secretly love him that way.

Maybe you can't teach an old dog new tricks, but even trying with an old DINOsaur is the ultimate study in futility. Simply being a DINO--a fitting stigma for most current Democrat presidential hopefuls--is hardly up-to-date or progressive, but it does include having neurons evolved enough to master the "new trick" of paying the GND extensive lip service. A presidential campaign where the GND is the central, unavoidable topic of conversation--an aim ardently shared by the Sunrise Movement and Bernie or Bust 2.0--would simply make Biden's DINOsaur head explode. A result devoutly to be wished, since our stark choice may well be between the extinction of political dinosaurs like Biden and humanity's own.

Fortunately, there's one ultra-powerful weapon for keeping DINOsaur Joe Biden from running amok and dragging already-feckless Democrat climate response back to the Stone Age. Let's make the 2020 election all about the GND--a conversation Biden's fossilized, neoliberal worldview genetically bars him from joining.

Bernie or Bust 2.0: Our Only Party Is the Green New Deal

As pioneers of electoral revolt in 2016, Bernie or Bust's co-founders knew that the Democratic Party establishment had long been a formidable obstacle to democracy and urgent political progress. We found in Bernie Sanders not the perfect candidate, but a unique, popular candidate sufficiently hostile to that establishment to make him a lightning rod for revolt--revolt deeper and more thoroughgoing than Sanders, for all his talk of "political revolution," ever had in mind. Far from being devout "Sandernistas" or "sheepdogs" for Democrats' Clinton establishment, we were intent on a prolonged political war to the death--by the most feasible available means--between the progressive left and the dangerous neoliberal Democratic Party establishment.

As a living, exaggerated parody of the Democratic establishment at its most clueless and obstructive, Joe Biden is a worsened reincarnation of everything voters found "revolting" in Hillary Clinton. For 2020, not only have establishment Democrats found in Biden a standard bearer more hideous than Hillary, but they've done so in a presidential race whose peril and promise are historically unprecedented. No more potentially enlightened package of progressive policies than the GND has ever appeared: a package rightly acclaimed by Naomi Klein, Bill McKibben, and Noam Chomsky(to name just a distinguished few) as the pitch-perfect US response to humanity's climate emergency. The devil of course lies in the details, and only a truly radical GND (clearly not some castrated version palmed off on us by establishment Democrats paying it lip service) will fulfill the GND's historic promise.

As pragmatic radicals, Bernie or Bust's co-founders have pledged our passionate loyalty to a strong, toothsome version of the GND. To the extent that we regard the GND itself as the only political "party" to which we owe loyalty, and everything else is pragmatic calculation rooted in that fundamental loyalty. We feel the GND has no chance whatsoever of fulfilling its historic, climate-saving promise unless legions of activists join us in making the GND their "party," their unwavering object of political loyalty.

Yet, passionate loyalty to the GND still requires detailed calculation about candidates fit to enact it--especially when facing a "horse race" as crowded as the 2020 Democratic primaries. Perhaps surprisingly--but certainly conveniently for reconnecting with our Bernie or Bust followers--our pro-GND calculations led us to draw the same political battle lines as in 2016: Bernie Sanders and the progressive left vs. the Democratic Party establishment. An establishment represented at its most intolerably odious by Joe Biden.

Hence, we're calling our updated (and we hope, improved) pro-GND version of Bernie or Bust "Bernie or Bust 2.0." In the next section, we'll explain the political calculation that makes Bernie Sanders by far the most promising standard bearer for the GND, with some strategy refinements related to the miraculously gutsy young insurgent Tulsi Gabbard.

So Why Insist on Bernie (Enhanced by Tulsi) Again?