For years and to the present, I can not believe or understand why so many people of Spain endorse not only bull fights but even cruelty to innocent animals in their religious festivals. Yes, animal cruelty is found the world over, but it is especially sad when it is connected to some religious belief.

Whether this cruelty continues today I don't know, but I do know that at some previous religious festivals- men would ride on horseback to see who could lop off the heads of live hanging geese.

I also read that they might even throw a live donkey off a high building. How can cruel acts such as these be considered religious?   And surely, the God of creation could not approve of such cruelty.

And then, for a very long time, many of us thought that if we could travel to Spain on vacation, that a bull fight would be a must see.  I know now that if I ever  had such an aspiration, it was short lived, because I began to realize just how cruel, barbaric, and exploitative, they really are.

A fair fight between man and a bull?  I don't think so. Maybe, if they would not stick the bulls with barbed darts causing them to lose blood and, therefore, strength, it may be closer to a fairer fight.

And of course after the flourishes and fancy footwork of the matador, the time comes for the fatal sword thrust which rarely insured an instantaneous death to the countless innocent bulls forced to fight in this arena of death against their will.

One time I was pretty shocked to read that even little children were  encouraged to "dart" young bulls, and  these darts were  made by their nuns.  I think the nuns missed the boat. They should have been teaching their youth compassion instead.

This next cruel exploitation involves only one bull -but he would face a horror which I think you will agree is even worse than what the bulls faced in the ring with a matador.

At this "feast" called the "Toro Jubilo" held in Soria, Medinaceli, Spain, balls of pitch are attached to the bull's horns and set on fire.  Released in the streets, he can do nothing but run around in pain.  In an attempt to douse the fire, he may smash into walls.  Sadly, these fiery balls can burn for hours and burn the bull's horns, body, and eyes while the spectators cheer and run around their victim. What kind of Christians do horrible things like this?

But, before I continue with this next sick chapter of Spain's cruelty to animals, please know THAT NOT EVERY SPANIARD approves of animal cruelty, and that there are good people in Spain trying to prevent it. God bless them and the people of Catalonia, who have at last BANNED BULL FIGHTS  in this part of Spain. 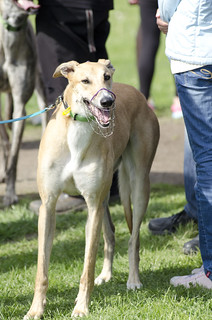 Only now have I been made aware of how badly many greyhounds were treated by their cruel owners in Spain, even though this cruelty existed as early as 2004 and perhaps even earlier.

One of the sites I used must have been a collaborative effort because I found no authorship.  They wrote that though there are enough Spaniards around who are cruel to their animals as to give cause for genuine concern, there are those who care about animal suffering and abuse.

One such Spanish organization called "yoquierogalgos" (I love Greyhounds) highlights monstrous cruelty in Spain against greyhounds, and their goal is to focus on and highlight the problems of animal cruelty in Spain.

This group sadly notes that some 50,000 greyhounds are dumped every year after the end of the greyhound racing season in January and February.  Then those dogs who have reached the racing life of two years are just disposed of like rancid meat.

Even though at another more current site, mention is made that greyhound racing is now outlawed in Spain, it probably continues illegally among some people who are not law abiding or caring.

SPENT GREYHOUNDS BEING SENT TO SPAIN

I had trouble with establishing any type of time line, but Magicshine (a group which speaks for the greyhounds) said that they were  aware of a thousand greyhounds being sent to Spain each year to be used for racing, coursing, and hunting.  These poor greyhounds will spend a miserable existence - kept in filthy conditions without adequate food and water.  Of course, none of the basics of standard animal welfare will be accorded them either.

It is estimated that these greyhounds are sent to Spain each year mainly from Ireland.  Having been bred for the UK racing industry, those who don't make the grade are exported to Spain where they will inevitably suffer a lingering and torturous death.

While there is a small minority of animal welfare charities in Spain calling for changes for the terrible treatment of Greyhounds, per this post, sadly they are failing to campaign effectively for improving the lives of these poor dogs who they call 'galgos.'

Magicshine, the group revealing some of the abuses facing these poor greyhounds notes:

They are kept hungry because the people who use them for hunting believe they will be keener hunters. So they provide them only with dirty water and stale bread.  They are generally kept in filthy, dark sheds or cells without bedding of any kind and are  left there for days until they are needed.

The greyhounds are forced to live with their own waste.  When they are no longer needed, they are likely to be left chained to a wall to die or be kicked out to starve to death.  It is not unusual to see these poor dogs wandering onto main highways and dying under the wheels of a vehicle.  Maybe even this cruel death is preferable to the one where owners prefer to kill them by hanging or fatal mutilation.

Some of these poor greyhounds are used as bait for dog fighting by a group of culprits belonging to a traveling community in Spain. Those malnourished and frightened greyhounds, if rescued and brought to a shelter for treatment of their infected wounds and fractures, are now even afraid of their rescuers.  Can you blame them for not being trustful after people so bbadly treated them for so long?

Magicshine is hoping that readers will try to do something to save greyhounds from being sent to Spain by making them aware of the dogs' plight and suffering.  They hope we will e-mail the Spanish government re the ill treatment of these poor dogs. They also hope that in protest, we will withdraw support of the Spanish economy until much needed changes are made to stop the horrors these poor dogs experience in a country where thus far the government shows a pitiful lack of concern.


GREYHOUND SUFFERING IN THE US

At one of the related sites, a writer from the Chicago Tribune reminded us at that the United States as well has for many years been guilty of mistreating the greyhounds used in greyhound racing venues.  Though I had read that some states finally outlawed this cruelty, I am not sure that all have.  And certainly, anyone taking the time to look up "Greyhound Racing in the US" will be ashamed to learn of the mistreatment of these beautiful, gentle dogs.

Related Topic(s): Animal Welfare; Exploitation; Government; Greyhound; Magicshine; Spanish; Suffering, Add Tags
Add to My Group(s)
Go To Commenting
The views expressed herein are the sole responsibility of the author and do not necessarily reflect those of this website or its editors.