Scott Lively May Trump Beck As Prince Of Fools

But The Christian Right Still Insists On Quackery 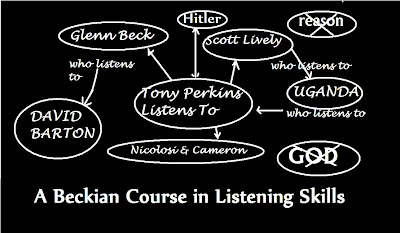 People listen to Glenn Beck. Yes, they do. And because they do, the rest of the country has to suffer the slings and arrows of unreasoned hatred fueled by an insipid lust for power. But who does Glenn Beck listen to? Does he listen to anyone? Do the writings of some pseudo-historian drive Beck's history and blackboard shenanigans?

Beck introduced David Barton as the "historian" who is "The Library of Congress In Shoes." Unfortunately, those shoes only hold a "career upon his claim that United States government was founded on Biblical precepts."

Barton is a collector of early American documents, and his official biography describes him as "an expert in historical and constitutional issues." Barton holds no formal credentials in history or law, and critics dispute the accuracy and integrity of his assertions about history, accusing him of practicing misleading historical revisionism and "pseudoscholarship."

Barton's claim that ours is a Christian Nation is specious at best. His discourses on slavery dodge the bullet when he skirts around the subject by citing his friend, Stephen McDowell, whose close relationship with R.J. Rushdoony (THE Reconstructionist) shines through in his explanation: America's slavery was not BIBLICAL Slavery! In other words, "Southern Slavery Wrong - Biblical slavery Right!"

Reconstructionism has long been a taboo subject for American Christians because it advocates "reconstructing" government to conform strictly to Biblical law. For years, pastors, churches and denominations were quick to disassociate themselves from the Chalcedon Foundation, founded by Rushdoony. But today, unreason has taken hold and Reconstructionism is hiding in plain sight: in the teachings of people like David Barton.

Barton is a fraud. Beck knows it. Groups like Tony Perkins' Family Research Council know it. But neither of them care, because they need people like Barton.

It took the "kill the gays bill" in Uganda to bring Scott Lively to the forefront of influential "historians." His book, The Pink Swastika, was debunked by legitimate historians condescending to talk about such idiocies: Hitler was gay, he surrounded himself with gay men because they had no conscience and were the most vicious, therefore Nazism was founded by gays. Lively brought forth his precepts in Kampala, Uganda last year, along with the principle that the criminalization of homosexuality was the best way to eradicate it:

Rev. Dan Vojir is has been writing/blogging on religion and politics for the better part of ten years. A former radio talk show host (Strictly Books " Talk America Radio Network) and book publisher, Dan has connected with some of the most (more...)