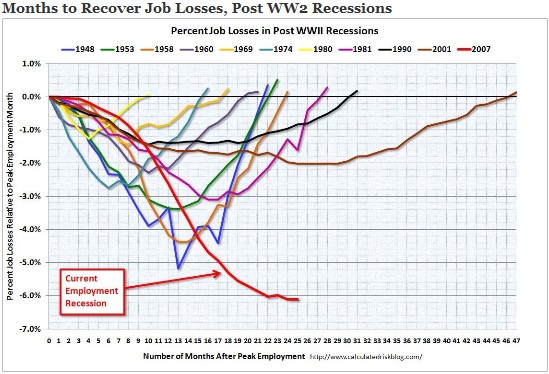 (Image by Unknown Owner)   Details   DMCA
>
Graph of U.S. job losses in post-WWII recessions relative to peak-employment month. The red line represents the change in U.S. employment in the 25 months since it peaked in December 2007.
The American Recovery and Reinvestment Act of 2009, abbreviated ARRA and commonly referred to as "the Stimulus," is an economic stimulus package enacted by the 111th United States Congress in February 2009. The measures are nominally worth $787 billion.
Of these, $288 Billion went into tax cuts, most of which went into personal savings as Americans finally realized that they had run up too much debt to continue their spending spree.
The $144 Billion that went into state and local fiscal relief was totally insufficient, as states continue to layoff teachers and close parks (and, e.g., the California university system is talking of imposing a 32% increase in in-state tuitions).
Only $111 billion of the ARRA went into infrastructure and science, and only $51 Billion of that went into "core" investments (roads, bridges, railways, sewers, other transportation), which directly created new civilian jobs.
The result of all this was a continuing hemorrhaging of American jobs.
By comparison, China spent $44 Billion on intercity railroad lines in 2008 and $88 Billion on these railroads in 2009 out of a total of $600 Billion 2009 stimulus budget devoted to job creation.
From the looks of things (see post below), China seems to have solved its unemployment problems for the moment, which in turn gives a shot in the arm to the 35% of its economy due to consumer spending. By comparison, 75% of the U.S. economy is based on consumer spending (counting the 5% selling houses), and those Americans who have become unemployed can no longer consume at the torrid rate they had in the past.
For months preceding the passage the American Recovery and Reinvestment Act of 2009, Nobel Prize winning economist Paul Krugman had been advising President Obama that he should heed what FDR learned was necessary to pull out of the Great Depression: If big business can't/won't create jobs, then the government must do it.
Obviously, he didn't listen. And look where it's gotten us.
Disclaimer: Obama might well have come up with a better stimulus plan were it not for Republican resistance. And, barring an act of God, a Republican president would have done far worse, based on the party's quasi-religious belief that the best government is a government "drowned in a bathtub" (after it's finished deregulating big businesses and cutting taxes).

David L. Griscom, a Fellow of the American Physical Society, retired in 2001 from the Naval Research Laboratory in Washington, DC, where he had been a research physicist for 33 years. He has subsequently held visiting professorships of research at (more...)
Related Topic(s): Economic Stimulus; Economy Recession; Economy-Economics- US; Job Unemployment; Unemployment Rate, Add Tags
Add to My Group(s)
Go To Commenting
The views expressed herein are the sole responsibility of the author and do not necessarily reflect those of this website or its editors.

Inside the Single-Payer Meeting and Please Fax Max

How the 2004 Election was stolen on optical scanners: John Brakey and the "Hack and Stack"

An Anemic Stimulus Bill - China has Left us in the Dust