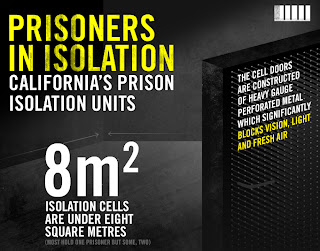 --An interview with Tessa Murphy

"California Department of Corrections/PBSP-SHU policies and practices, have violated our human rights and subjected us to torture -- for the purpose of coercing inmates into becoming informants against other inmates, etc., for the state," writes one prisoner held in solitary at California's infamous supermax Pelican Bay State Prison. This excerpt of his letter to the internationally renowned human rights organization, Amnesty International, is featured in Amnesty's new report on the use of prolonged solitary confinement inside California's "Security Housing Units' (SHUs), entitled The Edge of Endurance: Conditions in California's Security Housing Units.

The Amnesty report states that "no other US state is believed to have held so many prisoners for such long periods in indefinite isolation." At least 3,000 California prisoners are being held today in an extreme form of solitary confinement known as "super maximum" custody. Furthermore, the CDCR reported in 2011 that over 500 prisoners had spent over ten years in the Pelican Bay SHU, with 78 having spent over 20 years there. Explaining the recent emergence of SHUs, Amnesty writes that "California was at the forefront of moves to toughen penalties, and its prison population escalated during the 1980s and 1990s following the introduction of some of the nation's harshest sentencing laws. Once a leader in the philosophy of rehabilitation, California also passed legislation which expressly described punishment rather than rehabilitation as the central aim of imprisonment. Pelican Bay SHU, which opened in 1989, was one of the first super-maximum security facilities specifically designed to be "non- programming,' that is, constructed with no communal space for recreation, education or any other group activity."

In the Summer of 2011, prisoners held inside the Pelican Bay SHU initiated a multi-racial hunger strike that began on July 1 and spread throughout California's prisons. While the Pelican Bay strikers declared victory on July 20, other prisoners around the states continued for up to several weeks longer. The California Department of Corrections and Rehabilitation (CDCR) reported that at least 6,600 prisoners in at least one third of California's 33 prisons participated in the hunger strike. Ending the use of prolonged solitary confinement was one of the strike's five core demands.

implementing changes, the hunger strike resumed briefly in late September 2011, but was

called off after meetings between prisoner representatives and CDCR and further assurances that CDCR would institute changes. While no disciplinary action had been taken against the first hunger strikers, the second hunger strike was treated by CDCR as a major rule violation and some prisoners were punished by having their property and canteen privileges confiscated. Fifteen of the strike leaders were reportedly moved to harsh conditions in administrative segregation cells for a short period," writes Amnesty International in their new report.

The CDCR has responded to the striking prisoners' demands with their own proposals. Amnesty critiques the CDCR's proposed reforms, arguing that "the reforms do not go far enough. There are continuing concerns about both the fairness of the procedures for assigning prisoners to what could still be indefinite SHU terms, and about the length of time in which prisoners will remain in solitary confinement". While measures to reduce the number of prisoners held in security housing units are a positive step, in Amnesty International's view the proposals should ensure that only prisoners who present a clear and present threat, who cannot be safely housed in a less secure setting are assigned to the SHU. Given the serious consequences of SHU confinement, the authorities should ensure that STG [Security Threat Group] validations are based on a thorough and impartial investigation, and only with concrete evidence of gang-related activity posing such a clear and present threat; that prisoners have a fair opportunity to contest the evidence; and that such decisions are subject to regular, meaningful review."

Over 40 years ago in Louisiana, 3 young black men were silenced for trying to expose continued segregation, systematic corruption, and horrific abuse in the biggest prison in the US, an 18,000-acre former slave plantation called Angola. In 1972 and (more...)
Related Topic(s): Amnesty International; California Politics; Change; Change Dot Gov; Prison Industrial Complex; Prison Nation; Prison Violence; Prison-Prisoners; Prisoner Abuse; Prisons - Penal System; (more...) Rights; Torture, Add Tags  (less...)
Add to My Group(s)
Go To Commenting
The views expressed herein are the sole responsibility of the author and do not necessarily reflect those of this website or its editors.