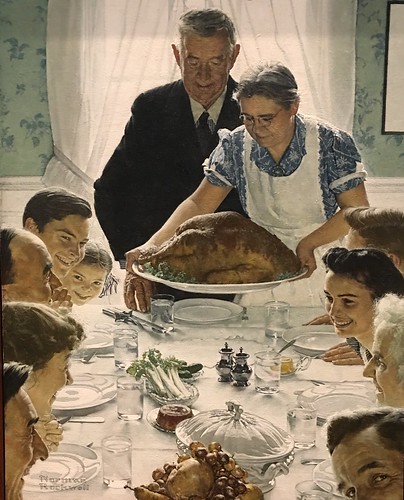 The desire to conquer and exploit runs deep within the American psyche. It's ingrained so thoroughly that most who've grown up in the country's social environment require great personal growth to overcome it, and many others will likely never even be able to make such steps. It comes from the conviction that the United States and the capitalist economy it's built upon are crucial aspects of civilization, ones that need to be defended from all enemies foreign and domestic.

More importantly, it comes from a sense of self-interest. As Europe's capitalist class has colonized these lands as part of its expansion project, it's created a social contract with the settler masses, as well as with the colonized peoples who've been culturally assimilated into Americanism. This social contract promises that the masses who live within the core of the empire will receive the benefits from imperialism along with the bourgeoisie. In this way, the country's patriots have politically tethered themselves to the capitalist class, even though they're exploited by the capitalist class themselves.

What stops them from supporting the struggles of the global populations who are exploited by imperialism-as well as the impoverished and colonized peoples inside the U.S. who labor within the country's modern slave system-is a sense that the fate of the empire is tied into their own fates. While the empire was expanding across the continent during the era of westward colonization, the workers who benefited from settler-colonialism cheered on the escalating genocide because more annexed land meant more wealth for themselves. The same logic drives the American patriots of today.

It's a poisonous kind of thinking, one that causes someone to respond to situations which would otherwise radicalize them towards revolutionary socialism with a reactionary urge to ramp up imperialism. The pandemic and the new great depression are forcing many Americans to reassess their political stances, to seek ways to fix their deteriorating living conditions and their crumbling social order. Some are turning to revolutionary politics, but many others are turning towards the dark path.

Throughout the Biden era, the country's situation will in many ways improve from the abysmal circumstances that Trump dragged us into. In his first planned executive orders, he'll undo Trump's Muslim ban, rejoin the Paris climate deal and the World Health Organization, allow the children of undocumented immigrants to remain in the U.S., restore the environmental deregulations put in place by Trump, and repeal Trump's transgender military ban. But these and the other Biden policies which will be beneficial to Americans (such as a more competent Covid-19 response from the White House and a potential raise of the national minimum wage) will come at the cost of even more peril for the targets of U.S. imperialism.

Biden promises to end Trump's most blatantly murderous sanctions on Iran and end U.S. support for the genocidal war in Yemen, but among the Washington political class these aren't radical ideas. The Democratic side of the imperialist cabal aims to turn the empire's sights upon foreign destabilization projects that are more likely to result in expansions for U.S. global hegemony.

These moves will involve the restoration of Washington's role within international diplomacy that it had during the Obama era. Biden will firmly embrace multilateralism in contrast to Trump's reckless protectionism and ultra-nationalism, which will make Biden a more competent imperialist than his predecessor. Through this commitment to working in tandem with the world's other imperialist powers, he'll continue the genocidal sanctions on Venezuela, maintain and potentially expand the occupations of Iraq, Afghanistan, and Syria, ramp up the militarization of the Korean Peninsula as part of his mission to strong-arm the DPRK, expand AFRICOM in a project to advance the Western colonization of Africa, and further build up the military encirclement and occupation of the lands surrounding Russia and China.

Such moves will involve-and in many respects require-the installment and fortification of regimes around the world which advance fascistic politics at the behest of the imperialists. It was Biden who was integral in helping carry out a 2014 U.S.-facilitated neo-Nazi coup in Ukraine, which the Obama administration saw as necessary to gain an ally in Washington's subsequent regional proxy war against Russia. All in order to attain this military buffer against a rival superpower, Biden and his colleagues then chose to be complicit in the campaigns of ethnic cleansing, political persecution, and fascist militia violence that Ukraine has since experienced amid its descent into fascism and economic collapse.

Biden intends to carry out many more Obama-style coups around the globe, ones that will result in the rise of governments as terrible as Ukraine's coup regime if the imperialists see this as what must happen. Biden will redouble Washington's current effort towards carrying out a color revolution in Thailand, which is based around trying to co-opt the legitimate social movements that are defying the Thai monarchy. Biden will also continue the attempts to co-opt the social movements in Lebanon and Belarus, which so far haven't resulted in successful color revolutions. These efforts will involve a flood of propaganda against China, Russia, and Iran, which respectively have good relations with Thailand, Belarus, and Lebanon. The Washington imperialists want to bring these three countries firmly under their control.

Biden will also try to carry out coups throughout Latin America. Not just with the goal of overthrowing the governments in the region which are under socialist or leftist control, but with the goal of keeping all of Washington's southern neo-colonies within imperialism's grip. In the coming years, we'll likely see a Bay of Pigs-esque attempt to use mercenaries to violently overthrow Bolivia's newly inaugurated socialist government. (This is already being planned.) We'll see increases of sanctions on Venezuela, Cuba, and Nicaragua amid advancements of a recently formulated USAID plan to carry out a neoliberal coup in the latter country. We'll also see a revival of the campaign that Obama's administration carried out across Latin America to unseat progressive leaders, which resulted in the 2016 Brazil coup that paved the way for the rise of Bolsonaro two years later. Like that past imperialist intervention effort, this one will be marketed as a Latin American "anti-corruption" crusade.

This will go along with efforts to further militarize and politically police countries like Ecuador, Chile, Colombia, and Honduras, all of which have recently been undergoing escalations of class struggle. The Biden administration's aim is to use brutal police state violence-and bloody coups if necessary-to keep Latin America's people trapped within the paradigm of neoliberal austerity that's been making Covid-19 ravage the region. Such is the dark near future that the poor and working classes of much of the globe will have to look forward to under Biden's rule, which is also slated to involve increased IMF austerity within 81 countries and an expansion of the pro-corporate economic deal the Trans-Pacific Partnership.

The Americans who remain loyal to their country see all of this as an acceptable cost for the potential improvement of their own living standards. They hope to see to it that America doesn't collapse, even if this will entail a vast new series of American projects to exploit, plunder, and oppress those who are vulnerable to U.S./NATO imperialism. They can't think of any alternative to this course of action, because they see the nations which are defying imperialism as evil "dictatorships," see the socialist system that can liberate the world from imperialism as a road to tyranny, and ironically see their own country as a bastion of freedom and "human rights."

Related Topic(s): Civilization; Fascism; Genocide; Intervention; Mercenaries; Militarize; Propaganda; USAID; Workers, Add Tags
Add to My Group(s)
Go To Commenting
The views expressed herein are the sole responsibility of the author and do not necessarily reflect those of this website or its editors.