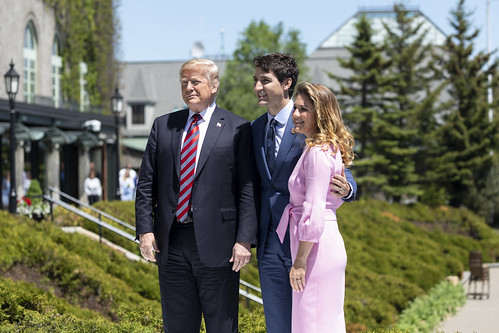 On behalf of the 94 percent of Americans who expressed approval of Canada in a Gallup poll early this year, I apologize to the people of Canada and their prime minister, Justin Trudeau, for the behavior of our president in recent days.

For the first time in American history we are led by a president who treats our friends as enemies, treats our enemies as friends and acts to destroy the alliances between our country and our democratic friends around the world.

When General Dwight Eisenhower commanded the landing at Normandy, his commander in chief acted like a leader of the free world when the free world was under attack. Americans and Canadians, the French resistance and the British RAF, and believers in democracy from across the European continent waged and won the greatest battle in the history of democracy.

The great truth that President Trump does not believe, and the great achievement that President Trump seeks to destroy, is that after World War Two Europe became a continent of democracy, and alongside America and Canada created a post-war world of unprecedented prosperity.

It is true that democracy and capitalism are not always perfect. Legitimate grievances that periodically exist should be resolved through the free trade of ideas in the democratic process and good faith negotiations over trade between democratic nations.

It is equally true that after the carnage and death caused by fascism in Europe and the dangers of dictatorship and war that emanated from communist Russia, what emerged was a post-war world that built a better life over decades and generations for Americans, Canadians and Europeans.

President Trump and far right parties in Europe would destroy the post-war world that defeated fascism and won the Second World War, defeated communism and won the Cold War, and built the lasting alliances and partnerships that defend our democracy and promote our prosperity.

At various times citing various claims, Trump has asserted his superiority of achievement above every previous president, from George Washington to Barack Obama. Justin Trudeau is in good company!

Throughout our history, Americans and Canadians have stood side by side, as democratic brothers and sisters in common cause, as democratic neighbors and friends sharing common values and aspirations for our countries, our people and our world.

Before American and Canadian teams battle on the ice in hockey, Americans and Canadians proudly join to share "The Star-Spangled Banner" and "O Canada," which joyously proclaims how Canadians stand with glowing hearts for a glorious land that will forever remain strong and free.

In the Gallup poll quoted above, while Canada soared to the top of nations Americans admire with 94 percent approval, North Korea sunk to the bottom with only 6 percent approval. When Trump heaps fawning praise on the North Korean dictator and scorn on the Canadian prime minister, he is on the wrong side of American opinion, decency, democracy, history and human rights.

Trump should negotiate with North Korea without praising the barbarous dictator who rules it, meeting alone with him without his secretaries of State and Defense by his side, and declaring an end to joint military exercises without consulting with South Korea, another contemptuous insult to another democratic ally.

We should negotiate trade issues with Canada, Mexico and Europe as friends and allies resolving differences with mutual respect and not arrogance, ignorance, belligerence and threats.

Related Topic(s): Alliances; American Presidents; Canada-us Integration; North Korea; Trump Praises Kim Jung-un, Add Tags
Add to My Group(s)
Go To Commenting
The views expressed herein are the sole responsibility of the author and do not necessarily reflect those of this website or its editors.