Click Here to Remove All Ads
The cynical exploitation of an imploding Ukraine may give Washington its biggest prize yet, and probably on the cheap, too--
Prying the Ukraine loose from its historical moorings Copyrighted Image? DMCA
The nation is spinning out of control--as planned.
"
By Patrice Greanville
A s befits a loyal organ of the US ruling class--yes, Virginia, protestations to the contrary the US does have a ruling class--the New York Times and other leading Western media have been busy promoting all manner of tendentious "facts" about the situation in Ukraine. The Times, as pointed out by Steve Lendman in his column Media Scoundels Target Ukraine, has opened its opinion pages to a number of high-ranking establishment figures to pontificate on the Ukrainian disturbances, notably, on Jan. 28, to four former US ambassadors to that nation. (What the West Must Do for Ukraine). It would be hard to locate less impartial witnesses against an independent Ukraine (or any other nation, in America's crosshairs, for that matter) than American government envoys, for constant intrigue on behalf of the empire and corporate advantage is their first and foremost mission. Such testimony saw light, of course, in addition to the regularly distorted reportage on Ukraine being dished out by the Times in its "news" pages. 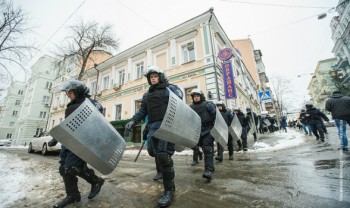 (Image by Unknown Owner)   Details   DMCA
Then, on Jan. 29, the Times continued its propaganda offensive with a piece by Yuri Andrukhovychjan ( Love and Hatred in Kiev), a man well known in Ukraine for his nationalist, "Pro-Ukraine" views (which he insists on denying despite abundant evidence to the contrary), and who is fiercely allied at present with the opposition and street rioters stealthily supported by Washington. As expected the op-ed packed a large number of falsifications and half truths, starting with the notion that the main source of violence lies with the government and not the demonstrators.
To most ears this sounds plausible enough to be accepted at face value, especially when we take account of the horrid condition of the masses around the world, a situation engineered and precipitated by the wholesale betrayal of the ruling cliques, including in the US, where cracking down on violent demonstrators remains par for the course.  Unfortunately for the propaganda gnomes, despite the tumult and the dead, this is not exactly what happened in the Ukraine, a country which, while riddled with appalling factional corruption, ethnic strife, and the eruption of a fervid brand of protofascism since its separation from the Soviet Union, has proved someting of an anomaly in this regard. Here the police and special forces have sensibly demonstrated unusual restraint in the face of an extremely high level of organized provocation by anti-government forces, an uprising that is now fracturing the very core of Ukrainian society, and, which, as Washington and its EU partners would wish, may succeed in dislodging the Ukraine entirely from the Russian orbit. 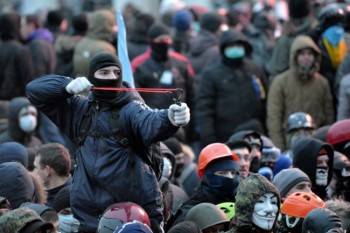 (Image by Unknown Owner)   Details   DMCA
Ukraine is rent by deep regional and ethnic antagonisms.
Should the Ukraine fall into the cynical US/NATO camp it would be a major setback not only for the Ukrainians themselves, who are now toying with the possible balkanization of their country a la Yugoslavia and even a murderous civil war, (not to mention a huge disillusionment with the realities of life under the harsh EU umbrella), but for those who resist the depredations of the West and its pestilential corporate-sponsored "globalisation" across all latitudes. (Ironically the Davos bigwigs, always ready to hide capitalism from retribution, have been quick to finger the impersonal "globalisation" as the culprit for the mounting inequality, unemployment and misery drowning the masses almost everywhere).  But let's face it: the long decades of hardship and the social ruins and widespread corruption detonated by the installation of a freewheeling capitalism in the former Soviet bloc have made the rise of a popular fascination with the supposedly democratic and affluent West --a mirage comparable to a new Eldorado--a common phenomenon in the periphery of Russia, an illusion ready-made for exploitation by the world's most opportunistic and meddling superpower.
That said, despite massive hypocrisy and media dissimulation, the engines for these disturbances are well known to those who follow these events without the blinders of the prevailing brainwash, and the signature of Washington's malefic hand in the internal affairs of the Ukraine is clear and irrefutable. As pointed out on Jan. 31 by Stefan Steinberg in a piece on the wsws.org site,

In mid-January, the US Senate Foreign Relations Committee held a hearing entitled "Implications of the Crisis in Ukraine." Assistant Secretary of State for European and Eurasian Affairs Victoria Nuland, who travelled to Kiev to personally support demonstrators, and Deputy Assistant Secretary for Democracy, Human Rights, and Labor Tom Melia addressed the meeting stressing the strategic significance of Ukraine.

Nuland noted that the fate of Ukraine was warranted not only because it lay "at the center of Europe" but also because it was also a "valued" and "important" partner to the United States.In his own report to the meeting, Melia announced that the US had "invested" over $5 billion in Ukraine since the dissolution of the Soviet Union in 1991, with $815 million of this total going directly to pro-US NGOs. Melia also reported that, since 2009, the Obama administration had donated $184 million to various programs aimed at implementing political change in Ukraine.   Both Nuland and Melia underlined that the "US stands with the Ukrainian people in solidarity in their struggle for fundamental human rights". Their comments were then supplemented by a report by former National Security Adviser Zbigniew Brzezinski, who warned many years ago of the central importance of Ukraine on the Eurasian chess board.

In other words, the US government itself admits it has spent over a billion dollars --a pretty hefty sum in a poor country like Ukraine--tweaking political events to its advantage, all behind the smug screen of helping the Ukies attain freedom and democracy! The actual figures are probably higher, as the moneys poured by the intel community into these operations are never entirely revealed to the public or even Congress.
The sheer audacity of the world's strongest and most rapacious plutocracy pretending to teach others about democracy is something of a record in the annals of the Big Lie, but, unfortunately it gets worse. Nothing stays still and the techniques of destabilization pioneered by the West have continued to advance in the last 40 years. Remember Solidarnosc? The ultimately pathetic Lech Walesa? That was only a down payment. A crudish dress rehearsal for what would follow later in Czechoslovakia and other hapless lands. The Ukrainian revolt has all the markings of a new ugly hybrid spawned by the propaganda and intelligence machines of the West, one boasting the undeniable parentage of both the hypocritical "Orange Revolutions" and the tested violence of embedded agents provocateurs of the CIA/Gladio school of thuggery.  As far as the script goes for the Ukraine, the unrelenting character assassination of the targeted regime tells us that the object is nothing less than the replacement of Yanukovych with some new clique eager to do the bidding of the West, and the further isolation of Russia.
Given the enormous geostrategic importance of the Ukraine, where this callous maneuvering is likely to lead is neither good for the Ukrainians, nor for the prospects of a durable peace in the world. But then again that was never intended.
ABOUT THE AUTHOR
A former economist and media critic, Patrice Greanville is founding editor of The Greanville Post and publisher of Cyrano's Journal Today.

Media critic and former economist P. Greanville is The Greanville Post's founding editor (http://www.greanvillepost.com/). He also serves as publisher for Cyrano's Journal Today. He has a lifelong interest in the triumph of justice and (more...)
Related Topic(s): Agents; Destabilization; Government; Plutocracy; Propaganda; Ukraine; Yanukovych, Add Tags
Add to My Group(s)
Go To Commenting
The views expressed herein are the sole responsibility of the author and do not necessarily reflect those of this website or its editors.