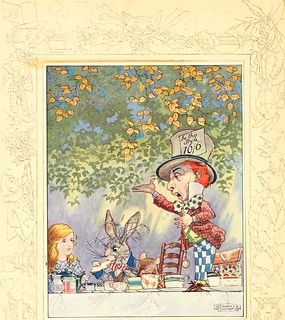 Image from page 7 of .Songs from Alice in wonderland and Through the looking-glass. (1921)
(Image by internetarchivebookimages)   Details   DMCA

Have we fallen down a rabbit hole and entered a surrealistic world as Alice did when she fell into Wonderland? Have we walked through a looking glass to a world that looks like ours but operates on a weird kind of logic?

I can't be the only one who looks at the political scene in Washington, D.C. and concludes it looks a lot like Lewis Carroll's 19th century fantasies, Alice in Wonderland and Through the Looking Glass and What Alice Found There.

What could be more bizarre than the lawsuit of the Republicans against President Obama because he has failed to implement parts of a law that they vehemently opposed and then spent four years trying to repeal?

Or how about this bit of logic from John Boehner, Speaker of the House of Representatives? In the morning he says that Congress will come up with a plan to solve the current border crisis and in the afternoon we find out the plan is to tell the president to do something. Of course, if the president does do something about the border crisis, he will be expanding the powers of the presidency, the same sin of which the lawsuit accuses him.

Or how about this bit of lunacy? Dick Cheney, John McCain and others want to send more troops to Iraq to support a government known for repressing segments of its population. Or think of a world turned upside down in which the United States supports a coup d'etat and Russia supports the constitutionally elected government? Believe it or not, that's what has happened in the Ukraine--although I have to add that by no means serves as an endorsement of Russia's support of Ukrainian rebels.

As our political landscape begins to resemble the Wonderland into which Alice fell, I find myself assigning characters to an imaginary Washington Wonderland: Our President would have to be Alice. John Boehner as unctuous but ineffectual The White Rabbit and Ted Cruz as the completely bonkers Mad Hatter are easy calls, and if Cruz is the Mad Hatter, then Jeff Sessions is the March Hare and Mitch McConnell is the Dormouse who sits squeezed tight between these two crazies. The Mock Turtle, a creature that doesn't exist outside of a mediocre pun, is Marco Rubio. Paul Ryan is the mean-spirited and hypocritical Duchess.

And who is the self-satisfied Cheshire Cat, sitting in a tree above the action--or should I say above the rhetoric and posturing masquerading as action--with a sly, knowing smile? It's has to be America's ultra-wealthy as represented by those fat cats, the Koch brothers. While our elected officials, especially our legislatures, continue to create chaos out of order, the ultra-rich enjoy a regime of low taxes, enormous tax loopholes for corporations, insufficient environmental regulations and a foreign policy driven solely by the needs of the 1%. The Cheshire Cats smile, too, because they know they are sitting pretty, what with current campaign finance laws that allow them to buy elections and the Republican campaign to restrict voting rights (which, BTW, takes a page from wealthy northerners in the 1870's and the South from the end of Reconstruction to the Civil Rights Act of 1964, who also moved to dramatically restrict eligible voters).

The more things don't change, the more the ultra-wealthy smile like Cheshire Cats.

Marc Jampole is a well-known poet and public relations executive and a former television news reporter. He writes the OpEdge blog, which covers politics and social trends from a progressive perspective.

Related Topic(s): Border Security; John Boehner; Koch Brothers; Obama Administration; Ryan-Paul; Ted Cruz, Add Tags
Add to My Group(s)
Go To Commenting
The views expressed herein are the sole responsibility of the author and do not necessarily reflect those of this website or its editors.

No matter what happens, we shouldn't send troops to Iraq