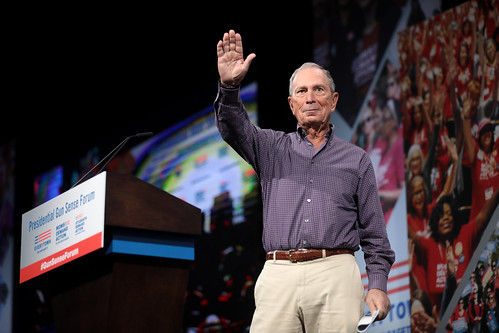 Michael Bloomberg, America's 8th richest billionaire according to the latest annual survey by Forbes Magazine, owns one of this country's biggest media empires, and is personally currently worth $56.1 billion. That makes him an oligarch, exactly like those oligarchs that the US media and US politicians love to accuse of polluting Russia's political system.

Yet American oligarch Bloomberg is seeking to be the Democratic candidate for president. He wants to be president so bad that before even making a single campaign appearance, he has already spent an astonishing $120 million of his own money on a nationwide TV ad campaign. That's more than any other candidate for the nomination has spent in the first ten months of the campaign season and half the total spent by all the rest of the candidates who have been competing for the nomination. According to a Newsweek report, if Bloomberg continues at this burn rate he could end up blowing an astonishing $6.5 billion on his campaign before he's through! Of course that's peanuts to a guy for whom such a figure represents just 11.9% of his total wealth (which is always growing, sometimes by that much in a year).

This report on RT-TV (in which yours truly offers my own comments toward the end ), torches Bloomberg's scandalous and hypocritical use of forced convict labor by women incarcerated in two prisons in Oklahoma.

The story of the Bloomberg campaign's unconscionable use of prison labor in which prisoners earn less than $1.75/hour and possibly as little as $20/month for making campaign calls to potential California voters was initially exposed by the Intercep t.

Bloomberg's ad campaign for the nomination is all about how he wants people to be able to earn a living wage on their jobs. His sorry excuse after being caught, is that he simply "didn't know" his campaign had hired a call center firm that was employing forced prison labor doubly pathetic. This from a guy who hasn't gotten his hands or fingernails dirty with the details of running a business for most of his adult life, preferring to pay other people to do everything for him"

Related Topic(s): 2020 Democratic Primary; 2020 Elections; Michael Bloomberg; Slavery-Forced Labor, Add Tags
Add to My Group(s)
Go To Commenting
The views expressed herein are the sole responsibility of the author and do not necessarily reflect those of this website or its editors.