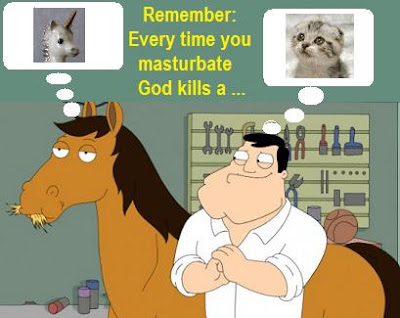 I was scared. All forty of us were. We went from the showers through the foot disinfectant and into the cold, subterranean vault of tile walls and floor. There were no windows, which was just as well because we were all naked. I was fourteen and, with the exception of my father, I had never seen naked men. Or naked boys called "men."

No, this was not Auschwitz. Instead, it was the first day of swimming class in my Catholic college prep school. It was then that I sadly realized: all men are not created equal. And that keeping this knowledge from young "men" (like me, at least) was criminal.


Likewise for getting a hissy-fit over a male mammal function.


Last Sunday, FOX aired its episode of American Dad, titled Never Look a Smith Horse In The Mouth. The animated program is definitely adult in content in that it has scenes and references that children would not comprehend: its send off of "The Rapture", Jesus meeting Sam in a bar to tell him that the Anti-Christ has taken Francine and an episode titled "Fake Jesus." One of the most notable was when Roger the alien talks about Christianity:

Roger: Oh, I love your religion ... for the crazy! Virgin birth. Water into wine. It's like Harry Potter, but it causes genocide and bad folk music.

"That's like getting hate mail from Hitler. They're literally terrible human beings. I've read their newsletter, I've visited their website, and they're just rotten to the core. For an organization that prides itself on Christian values--I mean, I'm an atheist, so what do I know ?--they spend their entire day hating people."

BTW, a poll was taken and 40% of those polled thought the scene was harmless and very funny.

The PTC is trying to penalize Fox and MacFarlane due to implications and not actual fact. They are also arguing that since American Dad airs at 9:30PM, it violates the law that says more adult content must be shown after 10:00PM.

A question: just where does bestiality come in on all of this? The horse may have ended the episode very happy, but did Stan get pleasure out of it? Obviously not. And if Stan didn't derive any pleasure, is there, in fact, any bestiality going on at all?

There wasn't. The PTC wants you to think that. They also do not want you to see a mammalian appendage ever again, unless you have to.

Rev. Dan Vojir is has been writing/blogging on religion and politics for the better part of ten years. A former radio talk show host (Strictly Books " Talk America Radio Network) and book publisher, Dan has connected with some of the most (more...)
Related Topic(s): American Family Association; Christianity; Comedy; Family Guy; Family Values; Horses; Mens Issues; People Jesus Christ; People Robertson Pat; Religion As Govt Policy; (more...) Sex, Add Tags  (less...)
Add to My Group(s)
Go To Commenting
The views expressed herein are the sole responsibility of the author and do not necessarily reflect those of this website or its editors.