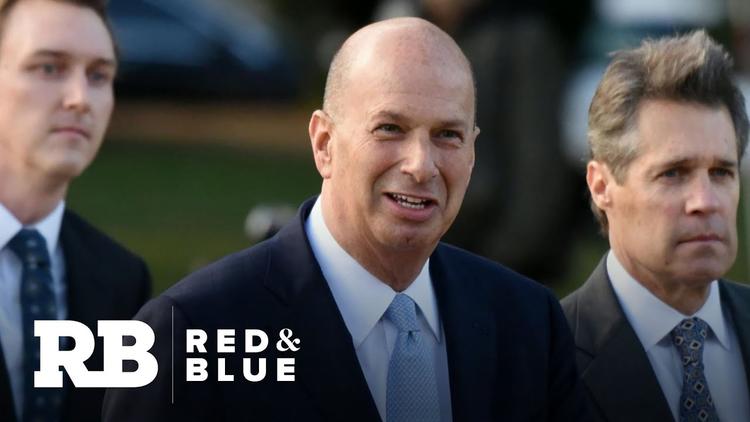 US Ambassador to the European Union Gordon Sondland, potentially facing perjury charges owing to his earlier testimony that conflicted with that of other State Department personnel on the Ukraine quid pro quo, "refreshed his recollection" on Tuesday. In testimony to the impeachment inquiry, he said, "I now recall speaking individually with Mr. (Andriy) Yermak, where I said resumption of U.S. aid would likely not occur until Ukraine provided the public anti-corruption statement that we had been discussing for many weeks."

He was referring to Trump's demand that Ukraine reopen an investigation of Burisma, the gas company on which Joe Biden's son Hunter served. Trump was refusing to release to Ukraine the aid appropriated by Congress until President Volodomyr Zelensky publicly committed to the corruption inquiry against the family of Trump's major rival for the presidency.

Sondland's testimony is particularly important because he gave money to Trump's campaign and was appointed to his present position by Trump. In fact, the White House must have involved him in the campaign to pressure Zelensky, since otherwise it is hard to see why the EU ambassador was even involved in Kyiv diplomacy.

Trump has cited Sondland's earlier testimony in his denial that he sought anything of value from Ukraine. That prop to the president has now collapsed.

I heard cable news commentators say repeatedly on Tuesday that Sondland's testimony is particularly damaging because he had no history as a never-Trumper and had warmly supported Trump in 2016.

In fact, there were signs in 2016 that Sondland has a conscience, and that he was not very carefully vetted by Trump's loyalists before being appointed ambassador.

Sondland's parents were German Jews who fled Nazi Germany. Sondland was born in Seattle in 1957. He became a hotelier, owning the Provenance hotels.

He was actually close to the Democratic governor of Oregon, Ted Kulongoski, 2003-2011. But he was also appointed to a commission by George W. Bush in that era.

Like many big businessmen, he tended to support the Republican presidential candidate.

But something went wrong when in summer of 2016 Trump attacked Khizr and Ghazala Khan, whose son, United States Army Captain Humayun Khan, was killed in 2004 in the Iraq War. The Khans are Muslim-Americans and Pakistani-Americans.

According to Denis C. Theriault at The Oregonian, Sondland took strong exception to this behavior and cancelled his sponsorship of a Trump fundraiser in Oregan that August.

There's another wrinkle. Sondland owned Provenance Hotels, but the CEO who ran the company was Beshar Wali, a Syrian immigrant, who was also furious about the treatment of Khizr Khan. Sondland and Wali worked closely together and supported one another in this decision. Wali was also a loyal Republican.

And that's the way it should have been. A Jewish American from a family of Holocaust survivors showed solidarity with his partner, a Syrian immigrant, in disparaging Trump's hatred of immigrants and disgraceful treatment of the Khans, a Gold Star family.

I can't explain why, but that fall, Sondland nevertheless donated $1 million to the Trump campaign. And then Trump appointed him ambassador to the EU, a position for which he had no particular qualifications.

Related Topic(s): Gordon Sondland; Quid Pro Quo; Trump; Ukraine, Add Tags
Add to My Group(s)
Go To Commenting
The views expressed herein are the sole responsibility of the author and do not necessarily reflect those of this website or its editors.