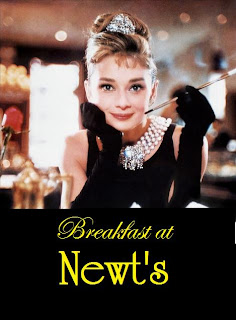 The Republican Party used to be more, shall we say, patrician. Oh, it had people with lots of money, but it was old money, not the flashy kind you see nowadays. It was the money of the Teddy Roosevelts, not the Franklin Roosevelts,* and even though they were conservative to a fault, they spent their money (as well as other people's) in style: Teddy - national parks, Franklin - WPA.

Sadly, all that style went away with Calvin Coolidge. Nixon? No style at all in Watergate. Ford? Stumbling has no style - in or out of Congress.  Reagan? Hollywood glitz while mixed up with Contras and stealing designer gowns.  Bush I? Can't recall much of anything. Bush II? As the youngsters say today, "Gimme a break!"

Style. Class. Respect. Every patrician virtue seems to have eluded the Republicans for years. Unfortunately, it will continue to elude them with the present Presidential hopeful roster:

New Gingrich - aka "serial adulterer" Mr. Gingrich announced his bid for the Presidency with the worst timing ever: owing upwards of $500,000 to Tiffany's at a time when the economy is the #1 American priority is gouache and terribly bourgeois. We realize that one young man tried to "sparkle up" Newt's image (see below) but we believe that it will take more than glitter to make him shine.

Michele Bachmann - aka "crazy eyes" and "slit our wrists" Mrs. Bachmann is more delusional than delightful: one does not make up numbers ($900 million a day for President's trip to Southeast Asia and India?),become a fear monger against the national census, nor extol the virtues of carbon dioxide.

Rick Santorum - aka "frothy mix" Mr. Santorum needs to be less obsessed with Google definitions and more concerned with his ethics: giving the warning signal to Senator John Ensign about his about-to-be-public affair was not in anyone's best interests.

Tim Pawlenty - Mr. Pawlenty was swept away from Catholicism by his wife and then turned into a devout RRR (Radical Religious Righter). He seems not to be "for" anything, but instead whines to the media (like Bryan Fischer of AFA) about what he is against (same-sex marriage, Social Security, Medicare). He continually sounds like a very poor sport.

Mitt Romney - Mr. Romney may look very patrician, have a great deal of money, and even a certain amount of pedigree,  but to put it bluntly, flip-flops  are not allowed in the White House.

Mitch Daniels - Mr. Daniels seems to have all the reserve required for a good patrician Republican, however, his attachment to Eli Lilly leaves much to be desired. Although most of society is on Prozac, there is no need for a drug company to rule the country.

Sarah Palin - aka "Rogue Something-or-other" and "Hockey mom" (her self-styled sobriquet). Mrs Palin has been in the spotlight so long without real substance that she is in danger of being "famous for being famous" The only person ever to pull that off was Zsa Zsa Gabor - with style and elegance (Queen of Outer Space notwithstanding). Her book, Going Rogue, was a paltry piece that impressed no one (least of all Katie Couric). Going Rouge** is much better. Tacky: putting an enemy's district in a crosshair for your PAC's website.

Ron Paul - aka "Dr. No" Mr. Paul has leaned so far to the Right that there is no Left left. This does not make for a good statesman. Governments are established for the benefit of the populace, but Mr. Paul's libertarianism doesn't seem to care. He quite foolishly declared that the President's raid on Osama Bin Laden was unnecessary. Bad form.

Herman Cain - his political positions are thinner than his pizza

There may be more to come, but we may not be able to stand the class deficiency.

Rev. Dan Vojir is has been writing/blogging on religion and politics for the better part of ten years. A former radio talk show host (Strictly Books " Talk America Radio Network) and book publisher, Dan has connected with some of the most (more...)
Related Topic(s): Michele Bachmann; Mitch Daniels; National Debt -Trade Deficit; Pawlenty; Ron Paul; Ronald Reagan; Sarah Palin; Sarah Palin And Her IQ; Tiffany, Add Tags
Add to My Group(s)
Go To Commenting
The views expressed herein are the sole responsibility of the author and do not necessarily reflect those of this website or its editors.