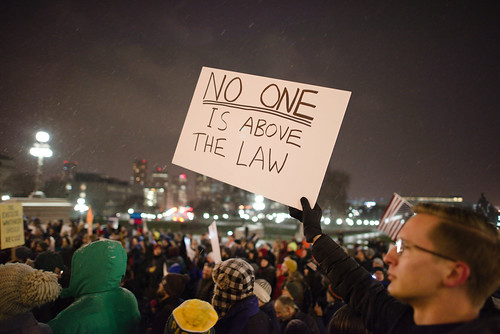 Update: I've added, at the end of this article, the video of me discussing impeachment being off the table with John Conyers, when he was chair of the House Judiciary Committee. you'll find his thinking to be identical to that of the centrists controlling the democratic party.

The Mueller report and other investigations raise accusations and questions that the House must address.

Let's start with one conclusion. The Senate will not impeach Trump with Mitch McConnell in charge. But that was the same assumption made about Richard Nixon, that there were not enough votes in the senate to impeach him. Nonetheless, Democrats had the guts and integrity to proceed to investigate the serious allegations that came out of Watergate. Eventually, the truths that emerged were enough to force Nixon to resign. And it wasn't the Democrats who forced him. The Republicans did. And it was the Republicans who pardoned the despicable criminal.

Let me say it again, to be crystal clear. the narrative of Nixon and Watergate was very similar, early on, to where we stand today. People did not believe that the Senate would follow through to find a verdict of guilty if the house started the process of impeachment. Nonetheless, the Democrats proceeded to investigate Nixon until the findings revealed such a miasma of criminality and corruption that the Republicans could not evade the argument against Nixon. They took the right step of telling Nixon to leave but then took the wrong, immoral step of pardoning him. That set the country careening in an immoral, amoral direction for almost fifty years.

Now, the Democrats are faced with a president who is guilty of far more, with many of his appointees and those who have worked for him already guilty and sentenced for crimes, and over a dozen more secret cases under way. It comes down to two things for the Democrats, integrity and the courage to do do the right thing.

The right thing is to aggressively continue where the Mueller investigation left off. I don't believe it matters whether they call it an impeachment hearing or a corruption hearing. They have an oath-bound obligation to pursue the truth and the facts. To start with they have an obligation to get the complete, un-filtered, un-redacted Mueller report, including all supporting documents. If Barr refuses to deliver it they must do everything within their means to get it, including arresting and imprisoning Barr. They must work with state judiciary agencies. They must do everything they can to get Trump's tax records, to ascertain whether he is guilty of violating the Emoluments clause.

If they do not go into this full-throttle, they will be guilty of failing to uphold their oaths of office. They will be guilty of cowardice. The centrist, fake progressive leaders of the house majority, Pelosi and Hoyer will embrace the Obama-Clinton Democrat mantle of can't-do-ism and do-nothing-ism, the "look forward not backward" approach that allowed the impeachable crimes of the previous Bush-Cheney administration that House Judiciary Chair John Conyers enumerated in great detail.

Michelle Goldberg writes, in her NYTImes article, Mueller Did His Job. Now It's the Democrats' Turn, which I must confess is what spurred me to write this article,

"It's a national disgrace that Trump sleeps in the White House instead of a federal prison cell, but it has been a while since I had any expectation that the special counsel Robert Mueller's findings, many of which were finally released to the public on Thursday, could set things right."

Then Goldberg talks about Mueller, a decent man of integrity, the closest thing to Walter Cronkite we have in these times fake news and distrust. She describes how the Repubicans are tolerating all this corruption and ignoring the profoundly serious allegations and findings of the Mueller report. Then she concludes,

"Democrats, conversely, have facts on their side, but not conviction. They are reluctant to begin an impeachment inquiry into Trump because majorities, in polls, don't support it, and there is no Republican buy-in. Whether or not this is politically wise, failing to impeach would be a grave abdication. If you want people to believe that the misdeeds enumerated in the Mueller report are serious, you have to act like it. To not even try to impeach Trump is to collaborate in the Trumpian fiction that he has done nothing impeachable. And if Congress won't take the lead in condemning the president's lawlessness and demanding justice, one of the Democrats running for the presidential nomination should. Mueller has given us the truth of what Trump has done, and in that sense the hokey faith the Resistance put in him was not misplaced. But right now only a political fight can make that truth matter."

And it gets worse. Another NYTimes Op-Ed proposes that there is a "national security nightmare... that is the missing piece of the Mueller report." The article explains that Mueller inherited a counterintelligence operation:

"President Trump may claim "exoneration" on a narrowly defined criminal coordination charge. But a counterintelligence investigation can yield something even more important: an intelligence assessment of how likely it is that someone in this case, the president is acting, wittingly or unwittingly, under the influence of or in collaboration with a foreign power. Was Donald Trump a knowing or unknowing Russian asset, used in some capacity to undermine our democracy and national security?"

They are not referring to the social media influence accusations that the Clinton campaign has used to excuse their incompetence that led to failure to take Michigan, Wisconsin and Pennsylvania. They argue, with detailed, bulleted supporting details,that

"The stark reality is that one might have a moderate to high confidence that decisions are being made by an American president who, in the process of getting elected and after assuming office, has acted with the interests of an often-hostile foreign power influencing him.

And that conclusion is deeply worrisome as a national security matter."

The Democrat party must take action, even if it means an uprising that takes over the leadership of the party, taking it away from morally compromised Nancy Pelosi and Stenny Hoyer, who have a decades-long history keeping impeachment... and justice "off the table." I cringe when I see new photos of Pelosi and see a failed leader, a bully who refuses to find the courage and integrity to get the oath-required job done.

David Swanson, who worked closely with former judiciary chair Conyers on George W. Bush impeachment efforts, provides, in his article, The 20 Surest Paths to Impeachment, a roadmap that should be followed.

The cowards and facile politicians may choose to take the easier route of poll-driven avoidance of impeachment. And I'm not saying that the House leadership should use the term impeachment at all. But they must aggressively begin investigating every one of the issues that Mueller's investigation and the counterintelligence investigation have raised, as well as the legitimate issues that Swanson presents.

Related Topic(s): Emoluments Clause; House Judiciary Committee; House Of Represenatives; IMPEACHMENT OFF THE TABLE PELOSI; Impeachment; Trump Impeachment, Add Tags
Add to My Group(s)
Go To Commenting
The views expressed herein are the sole responsibility of the author and do not necessarily reflect those of this website or its editors.