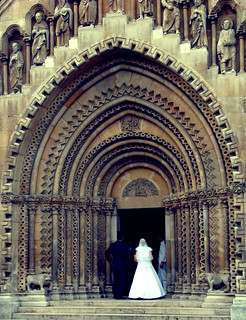 On June 26, 2015 the Supreme Court by a single vote in the case of Obergefell v. Hodges created a new landscape for the meaning of marriage in the United States. We now look back on the time when this was defined not only by law, but by a cultural tradition reinforced over centuries as idealized romantic love between a man and a woman. Now, that is in the past; this part of the culture war having been won by the progressive movement -- for lack of a more accurate descriptor. This means consideration of unintended consequences can no longer be dismissed as an argument by conservatives to retain traditional marriage. The war is over, the issue is dealing with the new order.

Marriage, pre Obergefell incorporated a universal ideal of western societies, created and celebrated by innumerable poems, songs, movies and novels. Common courtesy required an assumption that the bride and the groom were marrying for some version of this ideal. "Love" was the exalted poetic expression, sexual gratification and common interests the more prosaic elements of such marriage, literally the merging of two into one.

Of course this was the myth, one not subject to accurate surveys of it's prevalence, but one that we went along with. Over time, laws were enacted that attempted to eliminate those who blatantly deviated from this general idealized institution. If love was essential, and if marriage was an intimate merger then it must be between two people only, so bigamy became universally criminalized. In order

that the love be between equals, based on broader principles of family and clan, every state limited the institution by consanguinity, degree of blood relationship. All states prohibit first order relationships, and some second order, between close cousins.

We never did extend this promoting the ideal of marriage to age discrepancy, even though we still have a wide range of minimum ages among the various states. But no state has ever defined maximum age differences between the two parties; so a girl could marry a man three generations older without any legal hindrance. Maybe love had something to do with it, but during the depression those with coveted civil war pensions found many young women whose love may have been for that financial security more than their aged spouse. And, of course, pre-nuptual contracts and no-fault divorce are all deviations from the misty ideals of song and screen.

The Supreme Court can decide a case that earns landmark status, with the name of the plaintiff becoming immortalized in the decision, yet the consequences do not necessarily follow the instructions of the majority. Brown v. Board of Education ostensibly ended school segregation over sixty years ago, yet, based on statistical analysis schools are arguably more divided between blacks and whites than before that decision. Segregation of schools is a product of our racial history and values, with schools being only one component that is dependent on these elements that were not the essence of that 1954 decision.

I would offer that the current decision to legalize same sex marriage is about gender differences as reflected by culture, as such only minimally affected by laws. The broader consequences of this decision have never been part of the national discussion. This Supreme Court decision was based on several simplistic memes that prevailed, like snippets of DNA taken out of the whole tell nothing about the nature of the organism.

This essay is not a brief against same sex marriage, as this is now the law of the land, one that will not be reversed, nor am I convinced that it should be. The arguments why the decision should have been different are stated clearly in the dissents. In this post-Obergefell era, we can engage the meaning of this change of law in a way previously not possible when it was being contested -- and thus deeply politicized. It was total war between the two sides, with language being the main order of battle. This is now over, just like on August 15th 1945, Japs became Japanese, and previous enemies joined in a desire to go forward under the new state of affairs. So too, on this day new norms must be addressed, new myths created, and like the end of WWII, the victors have as much investment in mutual accord as the losers.

As I described previously, marriage has long been quite different than the idealized myths accepted by many. Yet, sexual intimacy has long been a continuing element. Only this institution provided religious and legal sanction for this otherwise sinful activity.

If there is to be a celebration of this Supreme Court Decision it should not be cast as a defeat of "homophobes" -- an irrational epithet that has been part of the armamentarium used in this war to depict any opposition as a deplorable mental defect. If this barely examined change in our central cultural myth is to be liberating, it can not be to the detriment of those who opposed this, who have been cowed by the current linguistic simplification worthy of Orwell: Discrimination = bad, Equality = good, Bigotry = evil.

Let the winners, those who see gender, as they do race, as a social constructs having no biological reality, while enjoying this victory, return to their roots of rationality. Males and females are different in ways that are verifiable from infancy to death, but also in subtleties we don't fully understand, only some of which are social constructs. Societies do form norms around these, some oppressive and others consistent with viable cultures. This Obergefell decision is historic. Yet, the cheering should be conditional on going beyond the victory. Those who claim that the arc of history bends towards justice have no evidence for this being true, as over the course of civilizations it certainly has gone both ways -- the direction only knowable in retrospect.

This battle is over. Marriage as an institution continues to be transformed as reflective of our larger culture -- sometimes for the better other times not. War is ugly, whether fought with military weapons or vilification of the enemy, as sides must be taken, with those not with us being deemed against us

The greatest distortion of this entire movement that culminated in this Obergefell decision was that the only opposition was from benighted religious fundamentalists. This deflected the reality that this movement was a classic manifestation of the sociological phenomenon known as the Bandwagon Effect, where an idea takes on a life of its own immune to any other perspectives. Just as no high level law firm would make the case to the Supreme Court, those in the learned social sciences with values built over centuries of objectivity were silenced by the sound of the cheering on the bandwagon for equality and justice. None in this academic community chose to risk all by standing athwart this parade to yell "Stop!"

The decision called "Obergefell" has ended the battle but not the war. It would be a mistake if the process of this victory becomes the norm for resolving social issues, with heated verbiage shutting out enlightened discourse. Our country does not need another divisive wedge that is seen as vindication for one side based on a single vote majority of a non elected body. The question not resolved or even addressed by this decision is whether this country shall descend into being shaped by sound bites or develop a mode of discussion based on candid open mutual respect.

This will determine which way this decision bends the arc of justice.

An extended version of Al's essay can be
found at AlRodbell.com.

Retired Commercial Printing Executive, developer of I.T. systems for the industry. Advanced degrees in Social Psychology, now living in Southern California
Related Topic(s): Justice; Sex; State, Add Tags
Add to My Group(s)
Go To Commenting
The views expressed herein are the sole responsibility of the author and do not necessarily reflect those of this website or its editors.

Choice: Pledge of Allegiance or Jail